Member
Okay, now that my new batch has arrived safe and sound and I've handpicked the few breeders I'm keeping the rest are up for grabs!

To start out here are a few articles on the genetics involved with breeding black swordtails that y'all should read-there is a reason I'm offering so many reds to go along with them here!

Also I should mention that Junebug and my good friend Gary have first dibs on which fish they want but for convenience's sake I've just gone ahead and listed them all in one place. Once they take their pick I'll update with what's left.

Okay, to the good stuff! To start out, the black berlins:

These are ALL from good ole Pete Mang (lotsoffish on AB), a very well respected breeder and they are FABULOUS. If I had the space I'd be keeping them all. Also, all of the ones I'm offering here were created using albino red swordtails which means they're carrying albino genes.

First off I've got two young males available (the first photo is of the actual group they'll be pulled from, the second photo is of one of my adult breeding males). $20 each cuz I've only got two but if you throw these in with a batch of red females you will get about 50% blacks from them. I am limiting these to one per customer. 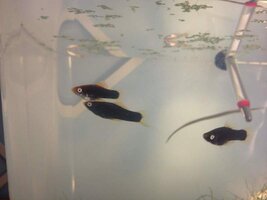 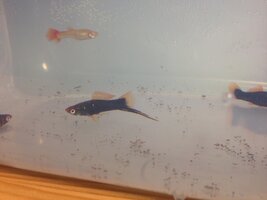 And then three females (these are a couple of my older females, the ones being sent are a wee bit smaller, and I can get WYSIWYG pics upon request) $15 each 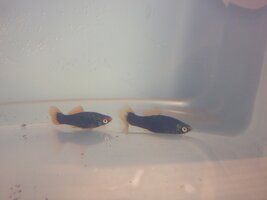 I've also got one koI LYRETAIL female for $15 (read up on lyretail genes in swordtails, this is a VALUABLE fish because you must introduce the gene solely through your females) and two blood red females (standard fins) for $10 each. 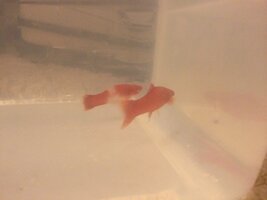 And then I've also got the following from other breeders:

5 tricolor sword juvies $8 takes them all 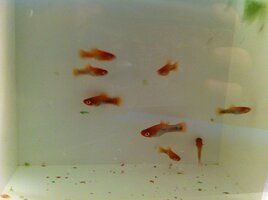 And these guys aren't actually *here* yet so obviously shipping'd be a bit delayed if you wanted to throw them in but I will have 10 other blood reds for sale as well soon. 3 are lyretails, 3 are hifins, and 4 are standard fins. Some of them are sexable and some I won't be able to be 100% sure on so I've gotta get them here and check them over well before slapping a price tag on each individual but they will range from $5 for standard fins to $15 for the one confirmed female lyretail. If you're getting any of those black girls up there I highly recommend you have me pick out a male for you from this batch! And if you get a hifin male from this group along with one of any of the lyretail females you will be absolutely SET genetics-wise. I can send you a photo of these ^ privately upon request but it's not my photo, just one I have permission to share, so I didn't want to post it here =)

Member
Oh I've gone and forgotten to list the rest of the goodies!

I still have this group of golden longfin aeneas that I don't really have much use for. I'll drop it to $20 for the lot. 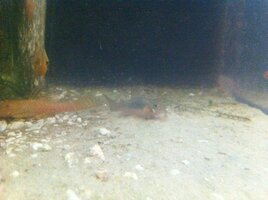 AND if you spend $50 or more you will get a FREE L144 blue eyed ancistrus thrown in your box. 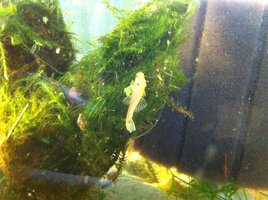 Shipping's going to range from $15-19+ for priority (Sorry, no LAG for priority what with the deep frost we're having) to $35+ for express (with LAG) depending on the size of the box.

Member
I still have the the two standard fin red females and the tricolor sword juveniles available, along with a hodgepodge of reds from the batch that's not here yet (I'll post photos of them as soon as they arrive). Here are some better photos of a few of the swords: 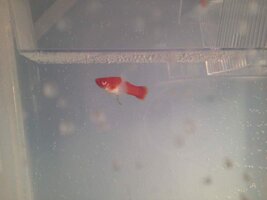 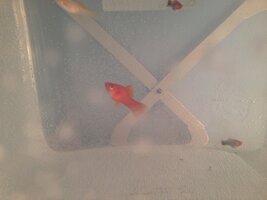 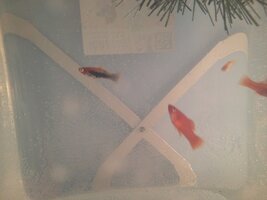 Member
Okay things actually got switched up a bit so here's what I have available as of 12/14: