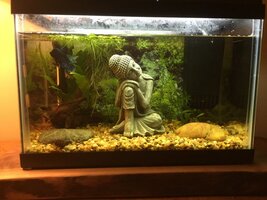 I have been treating my betta (hm male) for what seems like forever to try to get/keep what might be (maybe, possibly) fin rot under control.
[vague enough for you?]
I have tried everything short of actual medicine, including salt baths, paraguard, stress guard, and most recently a methylene blue dip. Since I moved him into a 2.5 gallon home on the ground floor (previously he was in a 10 gallon hex in an upstairs bedroom), I have been on top of water changes, changing about half a gallon daily, for about the past month and a half. I’ve also been adding tannins to the water, courtesy of Indian almond leaves, and alder cones. The tank he’s in now is very well furnished for him, if I may say so myself.
As many of you may know, many antibiotics are hard to come by here in Canada, so I was not able to get methylene blue until about two weeks ago, at which time he got his first methylene blue dip. I used the high rate, according to the label instructions, no more than 10 seconds.
I’m seeing signs of improvement following that dip. They are slight, but I’m optimistic. His dorsal fin has a deeper color, and his pectoral fins have lengthened and unfurled considerably. Since increasing the amount of tannins in the water over the last week, bubble nest construction has resumed. Although perhaps without the great passion that I see from other members pictures.
My question, at last: Would anyone care to make a recommendation as to how often I can or should repeat the methylene blue dip?
Many thanks!!
PS, does anyone think I should add a small dose of salt to the tank? My main concern there is the plants.
PPS, I’m trying to get a better close-up of him, but he’s hiding in the weeds for the moment. Stinker. 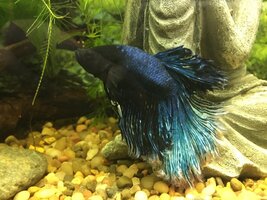 For reference, this was 6 months ago, when new (to me): 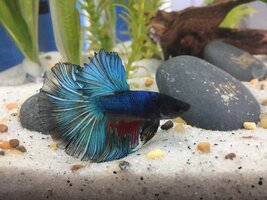 Wow. Big difference. I’m glad you’re able to change his water more often. If you change from mblue dips to baths you can add aquarium salt to that water. With the plants it takes a bit of time and patience to get the amount right to be beneficial to the fish without harming the plants. By the time you find the happy place it’s too late for your finbaby. The baths you can leave him in longer. I’m going to try to find out what’s available to you.

You can do mb dips daily.

Thanks, I hope! Um, you are clear that the nice pic (bottom) is the before, ratty (top) is now. Right? Just making sure.
And
I share both cause sometimes folks see the “now” and say “nice betta”, and while he’s behaving happy enough, he’s such a far cry from what he was. On the bright side, he’s been like this for months and months, meaning there does not appear to be any life threatening urgency here. Which is why I’m willing to keep chipping at it without opening the med cabinet.

If you change from mblue dips to baths you can add to that water.
Click to expand...

You can do mb dips daily.
Click to expand...

Also good to know, I presume same goes for baths?

Also good to know, I presume same goes for baths?
Click to expand...

Yes it does. And aquarium salt is unlikely to make any difference in his fins.

Yes it does. And aquarium salt is unlikely to make any difference in his fins.
Click to expand...

Actually aquarium salt by itself can inhibit bacterial and/or fungal growth. Added to mblue both solutions are made more beneficial. And not only can you leave him in a bath longer, you can do them twice a day.
And yes, I understand the bottom pic is before. He does sound incredibly beautiful even with his pitiful fins. But that is really a difference! You’ve got this. I know it.

Actually aquarium salt by itself can inhibit bacterial and/or fungal growth. Added to mblue both solutions are made more beneficial. And not only can you leave him in a bath longer, you can do them twice a day.
And yes, I understand the bottom pic is before. He does sound incredibly beautiful even with his pitiful fins. But that is really a difference! You’ve got this. I know it.
Click to expand...

We obviously have performed different research on meds and come to different conclusions . That said aquarium salt has its place within Aquatics, but in this instance I believe the effects of mb would negate any benefit that could be derived from aquarium salt in the bath.

One tablespoon per 5 gallons in the tank of aquarium salt is generally my first go to for prolonged fin issues. And doesn't affect plants.

I agree a bit longer in the bath wouldn't hurt neither would "painting" the mb directly onto his fins. I've never done baths more than once daily but would recommend it if it was dropsy.

I also had another thought... What is his diet? An inappropriate diet can cause fraying of fins as well.

Gypsy13 and sfsamm I am extremely grateful for both of your insights, and especially grateful that we are all grownup enough to disagree without getting personal.
I'll take both of your counsels under advisement, do my own research on a, or b, or a+b, and see where to go.

I also had another thought... What is his diet? An inappropriate diet can cause fraying of fins as well.
Click to expand...

- Breakfast = a shake of betta bites
- Supper = 4-6 HikarI Betta Bio-Gold baby pellets and another shake of betta bites, OR 2 thawed bloodworms, the latter no more than a couple times a week
- other nutritious treats as they are fed to my other tanks (never more than weekly), such as frz adult brine shrimp, frz baby brines, TINY bits of raw shrimp.

I have a ramshorn and a limpet in with him, so any extra food gets found/consumed, but I really avoid overfeeding. There's NEVER any pellets left behind, and maybe 10-25% of the betta bites reach the bottom uneaten (if you've used the shaker, you'll know that 25% of one shake is a TINY amount). And with 1/3 water changes daily, plus a thorough vac weekly, the tank is pretty clean.

I've tried having shrimps in with him. He ate the orange neocards. The ghost tried to eat him. And the Amano was clearly terrified of him, probably for good reason, so I barely ever saw it.

I have a tiny internal filter, and a preset heater. I'm thinking of doing away with the filter, and replacing it with a simple airstone. With the current water change schedule, I can't see going filterless being a problem. Thoughts on this?

I don't think it would be much of a difference to go to the bubble stone instead but personally I'd keep the filter just incase something were to occur and you have to skip a day of changes.

Yes it does. And aquarium salt is unlikely to make any difference in his fins.
Click to expand...

I “rescue” fish with fin rot and ich and for fin rot I use salt, and the same thing I use for ich... which is “ich-x”
Isn’t just for ich tho. It works some magic.
I’ve also only used salt for my sharks and it worked magic as well. I use 2tbsp for 10 gallons with plants. It works for me

Betta With Fungus Acts Better, But Fungus Is Still Present

Jan 16, 2019
Repolie
How Often can you do a saltwater dip on Freshwater Fish