Meet my lil Bluebell! (and pics of my others heh)

I got to drag bf out to all of the petstores today, and b/c he was in an extra good mood, he let me get another betta! YAY!
She's calling our 28 gallon home for now.
I say for now b/c I'm definitely eventually getting my 20 gallon long (they sell the tank for only 27 dollars at petsmart muaha)... and I plan on trying a sorority.
I know.. it's not recommended, but I'll have backup plans if the females end up not getting along. There will also be plenty of hiding places b/c the 20 gallon will be very well planted. *nodnod* I have it all planned out


Anywho! Onto the pics of my new gal!

She's a cute little CT female. Just an inch long right now. I wanted a blue betta next and since I don't see CT females at all I had to get her (I of course wanted all of the others but couldn't get them )
She's sporting some serious stress stripes, but as soon as she was let loose into the tank, she explored every single inch of it. She was SO cute and totally not shy. BF was rearranging everything to and she'd stick her nose right into whatever he was doing to check stuff out. He actually had to shoo her away a few times so he could place something down lol
I'm really hoping she learns quickly that I'm the food bringer b/c with the other oinkers in the tank.. not sure if her pellet food will last long enough for her to get it unless she's RIGHT there.

Her in her nasty blue water filled cup

I dumped her into a ziplock to float her

And some pics of my other babies!

Here is Caine in his newly redone tank. Well... I just took out the old gravel and put in the blue stuff heh. He loves it though. Since I didn't put in a thick layer, there is a space underneath the dragon's mouth he can swim/sleep under 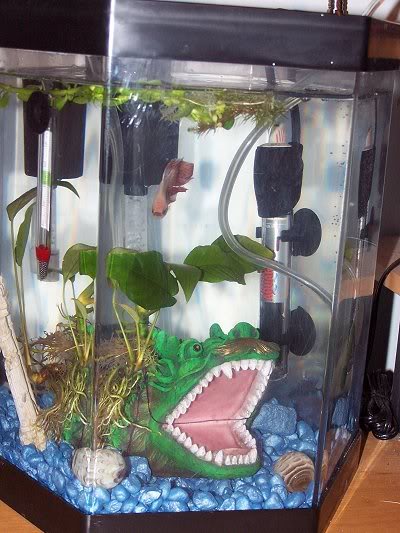 And some closeups of him.

And some pics of Afia (the female) and Raj (the male).. my oinker duo 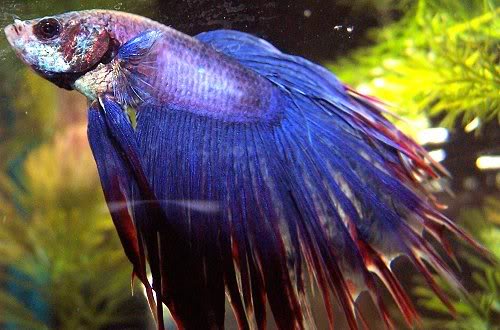 They are all absolutely stunning. I'm envious of your large betta family, i wish i could get more! Haha

They are some great bettas.. i'm a little partial to females and Bluebell is a beautiful blue.. and Caine looks so much like our Sora.

They are very beautiful. Welcome to bluebell!! Natalie

She is doing just fantastic in the big tank. I was afraid of what I was going to do until she figured out that I'm the food supplier, but I've been lucky that's she's come up to the surface to check out what's going on during feeding time so I could drop in a couple of pellets for her that she quickly gobbled up! heh


I think I'm also leaning more towards females. Probably b/c they're usually not the ones people want to buy.. and you always see so so many cups of them just wasting away on the shelf
But bah what am I saying.. I feel bad for all bettas male or female.. I just love them all so much and just wish I had room to save them all!

shollia said:
I think I'm also leaning more towards females. Probably b/c they're usually not the ones people want to buy.. and you always see so so many cups of them just wasting away on the shelf
But bah what am I saying.. I feel bad for all bettas male or female.. I just love them all so much and just wish I had room to save them all!
Click to expand...

That's exactly how I feel. I also hear the females are supposed to be the more intelligent (both sexes are intelligent tho) and i know we'll always have at least 1 male & 1 female.