Hello everyone! I’ve actually visited these forums for years, whenever one of my fish had an issue. I’m not sure why I never registered. But here I am now. I’ve kept fish for almost a decade. My oldest is an almost 13 inch, 8 year old black Oscar, named Oscar. Why is that his name? Because my husband has no imagination. Oscar used to have a tank mate, Gidget. She was bought at the same time. She was a lutino Oscar. Sadly she passed away in January. We aren’t sure why she died, I don’t think she was old enough to have died of old age. After her death, Oscar wouldn‘t eat, stayed at the bottom of the tank, moping around. He did this for about a week or so until my husband brought home worms. He ate them but still acted depressed. We went out and got him a new tank mate. His name is Odin. He’s 2-3 inches. We had him in a grow out tank with a blood parrot, Lulu, and some danios. After about three weeks Lulu became a bully. So we’ve moved Odin into Oscars tank with a divider. Oscar has perked up and is acting like his old self again. I can’t tell if he’s thinking “yay a new friend“ or “yay, lunch”. Either way he’s happy. Lulu was really confused for days after Odin left and searched for him high and low. Now she just stares at the guppy tank right next to her. She will be getting her very own 75 gallon in the next couple of weeks. I’m not sure what I want to put with her yet. Someone who won’t take her **** hopefully.
Well that’s my story and here are some pictures. 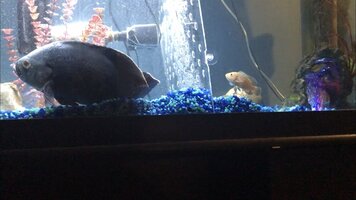 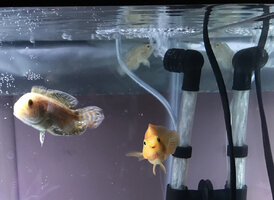 Welcome! I love your big fish. I’m one that is referred to on here as “those who keep lots of small fish” lol!

I finally got my husband to agree to 2 75 gallon tanks in our bedroom. So my goal is one for Lulu the blood parrot and one for maybe some Bolivian rams, dwarf rainbow fish, some cories and some tetras. I’ve only kept guppies and oscars.

I enjoyed reading your story. Thanks for sharing pics!

Welcome to Fishlore! I do like oscars as well, I mean, I have a 210g tank just to have 4 of them LOL.

Thanks for sharing pics and your story! People might think we are weird, but fish do have emotions and oscars are ones that really show it... That and puffer fish...
You must log in or register to reply here.

Meet my many fish!

Excited to be joining

Oscar fish in need of companion?