Gender: ? There is currently no known way of telling apart the sexes without actually cutting the fish open.

Notes: A beautiful herbivorous Characiform from the Amazon and Orinico basins. They have an intriguing method of swimming – moving around their environment with their head pointed downwards. They love munching on aquarium plants – they are one of the few herbivorous fish available for aquariums (most of which are characins).

In order to help prevent them eating aquarium plants, lots of fresh vegetable matter should be provided – such as cucumber, de-shelled peas and lettuce (It’s a good idea to cook these foods in the microwave for 30 seconds before ‘serving’). You can also offer flake (special herbivore flake is best) and small live foods (even though it’s a herbivore, it’s good for it to have a little bit of meaty food in them). Even so – it is defiantly a bad idea to put one in your prize high-tech planted tank, if you value your plants!

They have a reputation for being nippy and aggressive, and indeed they will become aggressive towards they’re own species as they mature. For this reason it is probably best to keep an individual for a small aquarium, but in bigger tanks (120cm long, perhaps) it might be possible to keep several Marbled Headstanders.

It is however, a very bad idea to keep a pair, as one might arise as a dominant bully and harass the other to death. Nipping other species is probably due to stress. They are quiet fish in the aquarium, and require hiding places. For this reason, it is a good idea to incorporate root-like driftwood in their tank. 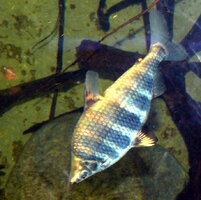