TheEssigs
Hey guys, did you know that the mangrove killie can live out of water for months?

I just read an article about them and it stated that the fist can live inside trees, out of water, for months each year. They can by changing their biology and metabolism so that it can breathe air.

...and not only that, this fish can also breed without a mate!

How did those get loose?

Silly escaped experiments.
voiceless_kat
LOL
Chief_waterchanger
There is a type of lizard in the USA (Dino could probably tell ya which one) that can make exact clones of itself asexually. I think Dino told me the entire known species of these lizards are all the same gender, essentially. There are some marine sharks that can do that also, I think.

But it is wild that it can change its biological functions so that it breathes through its flesh.

Could you imagine someone putting their hand in your face and you hear the hand wheezing? lol.
Tom
It's one of the golden rules of the natural world – birds live in trees, fish live in water.


The trouble is, no one bothered to tell the mangrove killifish.

Scientists have discovered that it spends several months of every year out of the water and living inside trees. 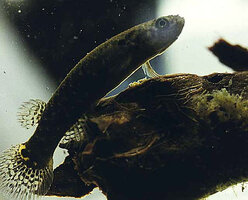 Hidden away inside rotten branches and trunks, the remarkable creatures temporarily alter their biological makeup so they can breathe air.

Biologists studying the killifish say they astonished it can cope for so long out of its natural habitat.

The discovery, along with its ability to breed without a mate, must make the mangrove killifish, Rivulus marmoratus Poey, one of the oddest fish known to man.

Around two inches long, they normally live in muddy pools and the flooded burrows of crabs in the mangrove swamps of Florida, Latin American and Caribbean.

The latest discovery was made by biologists wading through swamps in Belize and Florida who found hundreds of killifish hiding out of the water in the rotting branches and trunks of trees.

The fish had flopped their way to their new homes when their pools of water around the roots of mangroves dried up. Inside the logs, they were lined up end to end along tracks carved out by insects.

Dr Scott Taylor of the Brevard County Environmentally Endangered Lands Programme in Florida admitted the creatures were a little odd.

Although the cracks inside logs make a perfect hiding place, conditions can be cramped. The fish – which are usually fiercely territorial – are forced to curb their aggression.

Another study, published earlier this year, revealed how they alter their bodies and metabolism to cope with life out of water.

Their gills are altered to retain water and nutrients, while they excrete nitrogen waste through their skin.

These changes are reversed as soon as they return to the water.

Previously their biggest claim to fame was that they are the only known vertebrate – animal with a backbone – to reproduce without the need for a mate.

Killifish can develop both female and male sexual organs, and fertilise their eggs while they are still in the body, laying tiny embryos into the water.

They are not the only fish able to breathe air. The walking catfish of South-east Asia has gills that allow it to breathe in air and in water.

The climbing perch of India can suffocate in water unless it can also gulp in air.

That is incredible man! Very interesting fish.
Click to expand...

Isn't it though.
Tom
pinky93
I saw an article like that in out local newspaper.It said it happened in Belize because the mangroves were drained.That's very cool!