Member
I have a mating pair of angelfish. The male won't actually fertilize her eggs. He helps her with all the prep of the area and exhibits all the normal male mating behaviors but once the female starts laying eggs he forces in and eats them. I make sure they are all well fed so that it isn't a hunger thing. Any suggestions? They have done this whole process twice. I feel bad for the female becaise she has to chase him away constantly while trying to lay her eggs and I wonder if it's something I'm doing wrong as their keeper?

Member
It often takes fish some practice runs. Some fish never get it.

Are they by themselves or in a community tank?

Member
How many times have they laid eggs? If it is less than 4 don't worry. Also once they get it right leaving the lights on at night helps a lot (room light not tank light).

Dunk2 said:
It often takes fish some practice runs. Some fish never get it.

Are they by themselves or in a community tank?
Click to expand...

They are in a community tank but I have a divider that I previously read somewhere to put in place after the fertilization and lock ALL the fish out of the area as long as the area has good water flow to keep the eggs from getting fungus. I had a plan to do that.

jake37 said:
How many times have they laid eggs? If it is less than 4 don't worry. Also once they get it right leaving the lights on at night helps a lot (room light not tank light).
Click to expand...

This is just their second time and they are young. They were pretty tiny when I got them in October and the female is now about 3 inches fin tip to fin tip and the male is about 2-¹/² inches.

As for the room light, thank you for telling me. I had read to leave the tank light on but was worried about how that would affect algea growth. I also have a mesh tank divider I can put in so the other fish can't get in their area if need be. So far the female has chosen the exact same plant leaf on the right side of the tank, to lay her eggs on both times, so if she continues to prefer that plant it will be easy to divide the tank.

Member
*UPDATE*
The black angelfish who was eating the eggs isn't a male. SHE is now laying eggs on the same leaf. The yellow one who laid eggs two days ago is helping her defend the area while she lays them and isn’t trying to eat them. I watched them do a little mating dance this morning and they were cleaning the leaves and not letting any fish near the plant all day. Too bad nothing will come of their dutiful attempt this time. Leave it to me to have a lesbian angelfish couple.

Member
I had 2 females with my males and the alpha female would always eat the betta female eggs. The alpha female can bring her fishes to free swimming int he community tank if i let her which really impressed me given the other fishes in the tank. Once they become free swimming she can't keep up with them - but it is neat to watch her and the male suck the frys and eat at the same time without swallowing the frys...

Member
Another practice run for my Angelfish today. The female is eating the eggs. 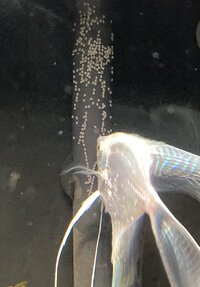 Member
How did they behave prior to mating? My male is being aggressive and lunging and like kissing her.

Member
They typically eat the eggs if not fertilized - it also can take 4 or 5 trys to get it right.


Dunk2 said:
Another practice run for my Angelfish today. The female is eating the eggs.