I’m new to the forum, so I hope I have posted this in the correct place. Just in need of some advice to do with my German Blue Rams.

I have a 26G tank with 12 Harl Rasbora, 3 Albino Corydora and 2 German Rams (Male & Female). Also an assassin snail but he is just garden maintenance.

My tank has housed everything apart for the rams for 10 months. So tank is cycled and maintained. My LFS was able to pick a M and F even though they were all young in the original tank. The first day of getting them into my tank, they were sticking together and swimming cautiously. It was nice to see them acting like a pair already, this early on. Then whilst watching them I noticed the female cleaning a rock, and in turn one of them would clean/guard the rock. The female’s patch went pink and she started rubbing the rock, until eventually she started laying eggs. The Male was also then following her and rubbing the stone too. I thought I would leave them to it after that. My tank has a automatic lighting system.

The next morning, I checked the tank and the rock was clear. The GBR’s were separately swimming around the tank. The Male swims slowly around the tank, whilst the Female will swim up and down the glass a little bit and also after the Male. However, if the Male spots her, he swims directly at her, fins all flared and before touching her, stops. The Female dodged anyway and gets scared. He will repeat this if she stays near him or if he starts swimming somewhere else. It is a constant every time he sees her he goes toward her quickly, but then slowly swim around her too.

The thing that has confused me, is that both of them were all nice and happy at the start, with their eggs. Due to not ever keeping a pair of Rams before, I thought someone may of experienced something similar? Or is this normal behaviour?

I have lots of hiding spaces, bogwood and plants. Attached photos too! The Male is a lot blue-er now too.

Appreciate you reading that and pre- thanking for any advice you may have! 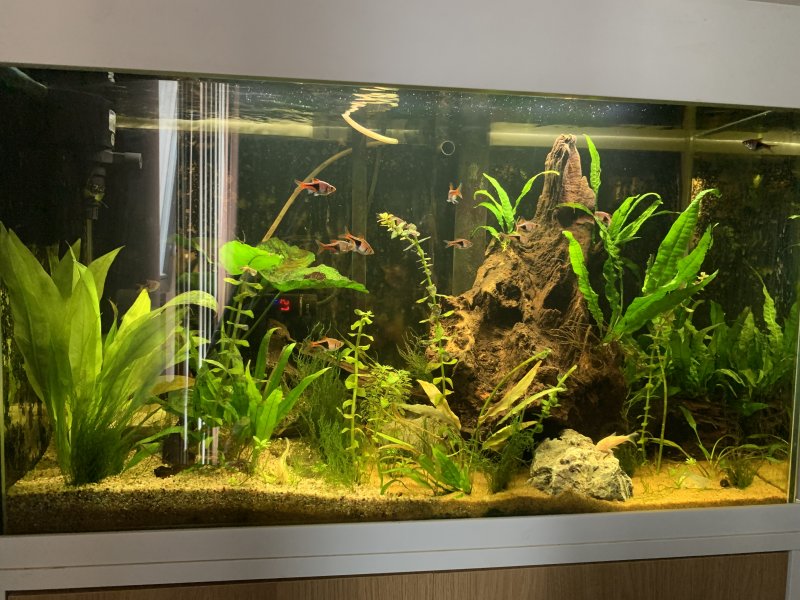 Pretty sure you got two females there ...
I would say I am 99% confident about that .I look at a lot of rams everyday and sex them better then most IMO.

Good to hear from you CB.

Hey Tom,
Still learning to sex "Rams" only 50% right. Took a look, the top one definitely looks female due to the vent. Curious what trait you see in the bottom one?

jmaldo said:
Hey Tom,
Still learning to sex "Rams" only 50% right. Took a look, the top one definitely looks female due to the vent. Curious what trait you see in the bottom one?
Click to expand...

Although the bottom one looks skinny like a male its fins match up to the females and it has considerable blue in the black spot .It is also the same size as female [actually smaller ] which is not how rams are ..
The top fish is loaded with eggs and will lay soon ,I assume the eggs mentioned were not that long ago since this is only a day old post so the bottom one is who laid the eggs before ?
We all know that one tell is never enough to go on but how they treat each other per OPs description and the appearance say female to me .
Besides most LFS suck at sexing rams they also get them from bad suppliers who usually sell their fish by size ..
A male the same age as a female will always be larger ,yea the two rams are the same size ....Females ....
You will never see a larger female then male unless they are from different spawns ..
Just me ?
OP

Oh wow! I saw the first reply and thought that would be it. Thank you for the replies!

The ‘Male’ has grown loads since that picture (attached). His fins are a lot longer, which he loves to flare, either when chasing the female or if he greets me.

When I first got them, the Male was definitely around the same size, which made me think if they were still juvy, but they have clear markings.

I do think one is Male and the other Female, but please let me know what you think after seeing the new pictures.

The Male will still swim toward the Female, with her darting away when he gets too close. Although I don’t think he is biting/nipping her, he is flaring his fins every time he does this. Could this be Male courting? I will see them swim together but the Female seems cautious, ready for the Male to dart.

(1 Image of Male that has grown a lot!)
(2 images of the Female)
Both taken 9 days after the first post! 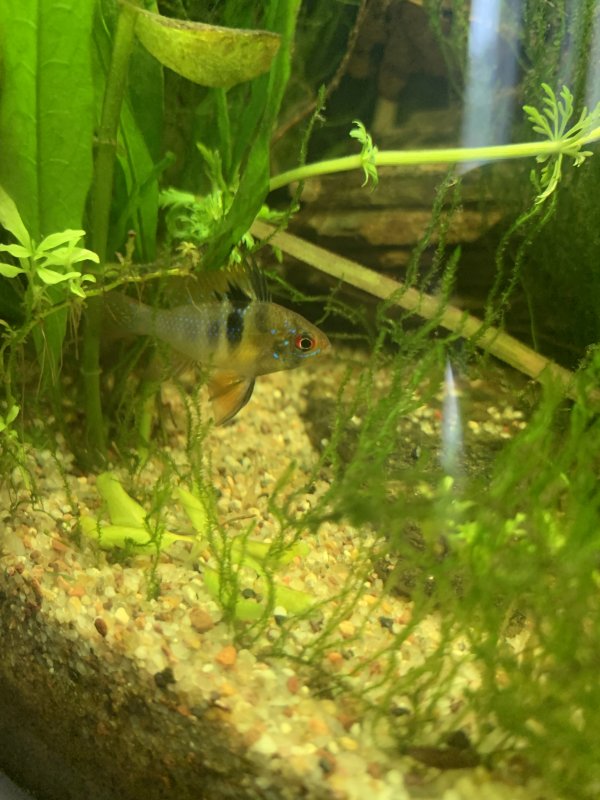 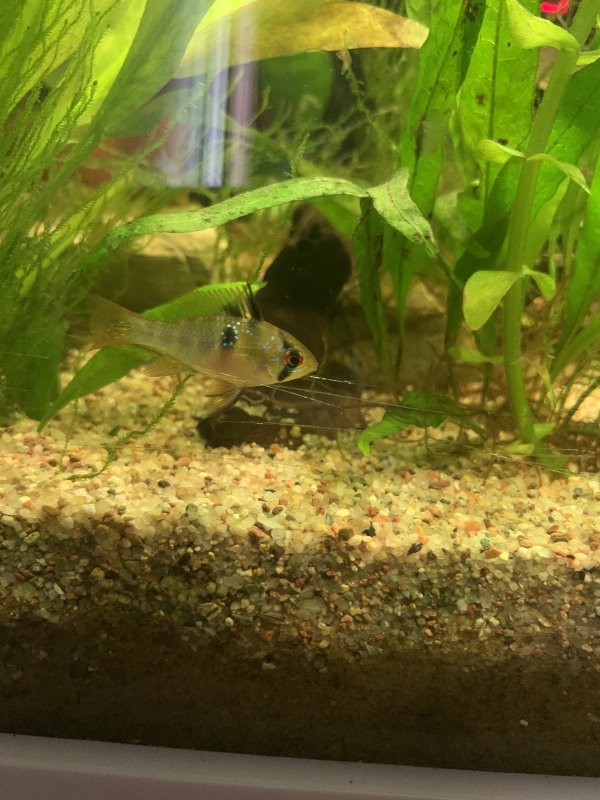 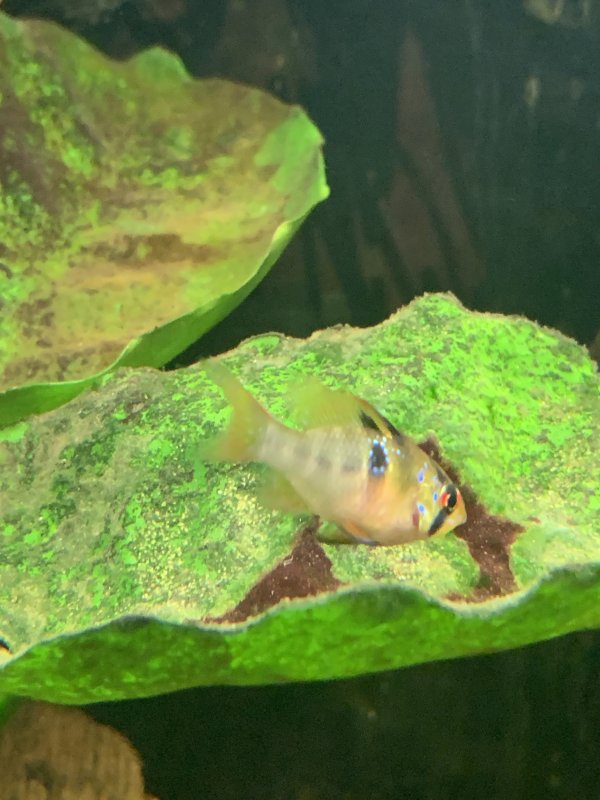 Whilst taking the pictures I suddenly saw him approaching slowly and she didn’t know how to react. They then sort of swam as a ‘pair’. 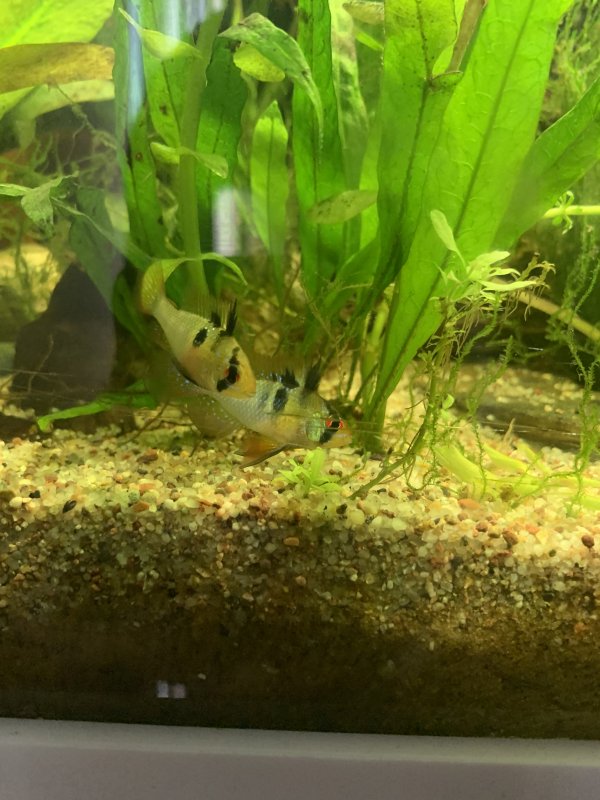 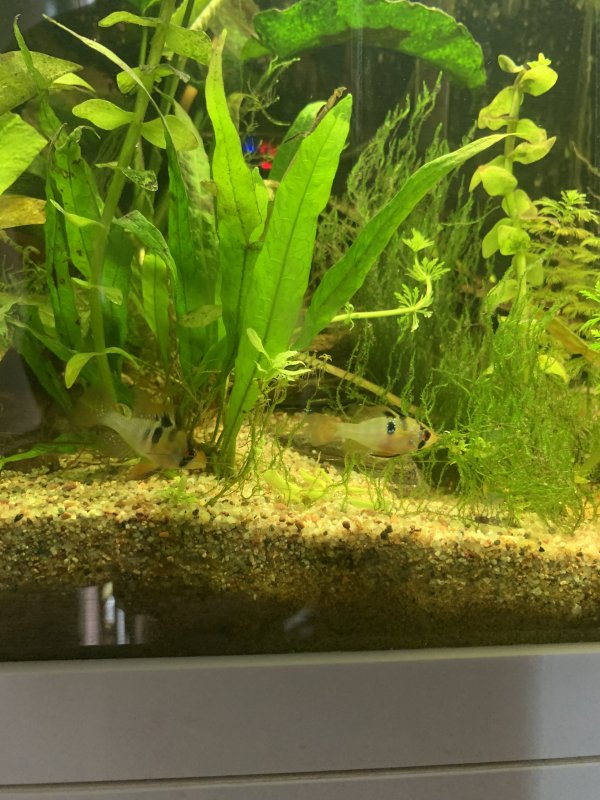 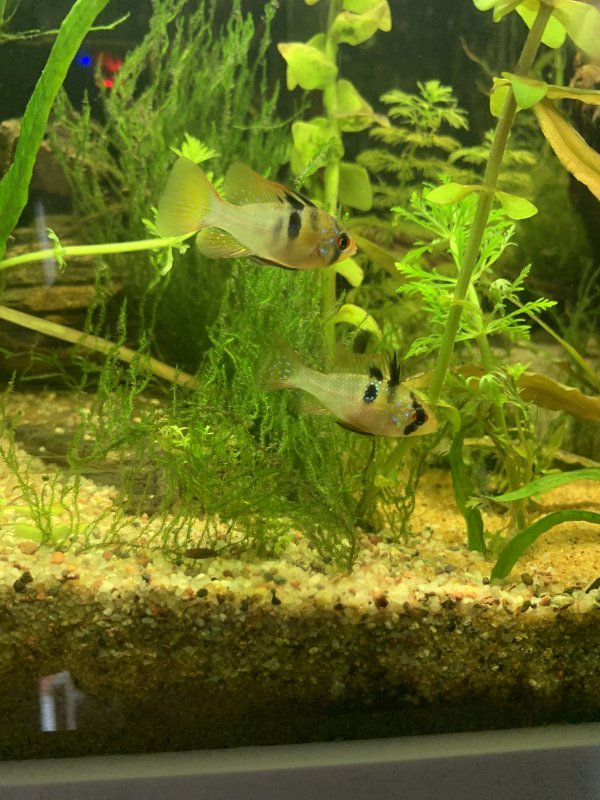