What is the lowest temperatures common plecos will take?
We recently built a 1x1x8m pond, it currently has 3 goldfish. I intend to get more goldfish&koi on thursday. I want to also put algy (common pleco) in. He is around 9in at the moment.
Its spring now, so it isn't that hot but its warmish will it be possible to put him in do you think?
Thankya!

As there isn't any replies so far I'll uhhh carry on!;D
I've made out that 20'c is the lowest they take. I'm just waiting to see what temp the water is.
Another question is: as tropical fish + goldfish shouldn't be mixed, will this be possible as the pond is big and someone mentioned before, the pleco can go along with koi in a pond?arky
Tom
A common pleco should be fine with goldfish and koi. Sorry I didn't see this post before.
Tom
Sabi
Thanks, glad to have a reply.

K, I got the koi & goldfish today, going to put algy tomorrow or sat. Hope he likes it there!
Butterfly
He would be fine out in the pond. Before I moved I had one that went out in the spring and back inside in the fall.
planet catfish lists ideal temps as 69.8- 80.6F (21-27C) He will need wood to rasp on.
What are you using for filtration and water movement?
Dino put my Rhino outside in the koi pond last summer and he grew so much I had him keep him at the fishhouse so he could go back outside in the spring.
Hope that helps
Carol
Sabi
H'lo Carol!
Yea I was thinking i'd bring him in winter. I have a powerful pump but I forgot the name and the box is thrown away. If I come across it I'll let you know. As foe wood I'll have to get him some, oh and I hope he gets that big! Only then I don't know where I'll put him in winter! I was think tho if there will be a way to rig up a light heating system just for winter...
Butterfly
If you could keep the water temps stable and at minimum temps he would probably love it. No need to hunt the box I was just curious
MY plecs always seem to do good inside but there was such a robustness and color enhancement after being outside. I think I was excited as they were when they went out LOL
Carol
Sabi
;DI can see you love them outside! I'm personally exited to see what happens!
Only- a bit worried too, don't want anything happening to him!
Butterfly

;DI can see you love them outside! I'm personally exited to see what happens!
Only- a bit worried too, don't want anything happening to him!
Click to expand...

Yes wish I had a place where we've moved to to put one outside Maybe next summer.
Do you have any birds, cats etc that might bother your fish outside?
Does it get really hot and do you have a little shade for the hotter months? Floating plants would work.
Keep us posted on his progress
carol
Sabi
Yea i'm going to get a few live floating plants when my parents come back. The only animals that come by the pond are the dogs but they don't bother about it.
Weeel I put him in today! And everyone came to watch too! ;D
He's moving about every now and then slowly taking in the surrounding I think! I'm going to keep an eye on things. Temp is at 25'c and lowest so far was slightly under 20'c. I think that was the last cold spell we'll be getting as summer is setting in. But if I see it does get cold I'll bring him in, but I hope t doesn't as I don't think moving him around will be good.
Sabi
Just an update...
So far he seems to be fine , I saw him sucking the sides the other day.
We want to improvise the filter as its not keeping the water clean enough after all.
Heres some pics... 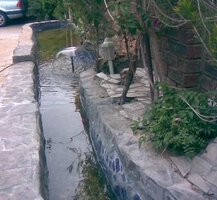 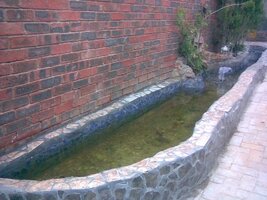 You mean gallon wise? To be honest I don't know as one end is narrow and the other wide. I've not measured it but I think its roughly 1x1x8m.Or less maybe
Tom

You mean gallon wise? To be honest I don't know as one end is narrow and the other wide. I've not measured it but I think its roughly 1x1x8m.Or less maybe
Click to expand...

Do you know how many feet and inches?
Tom
Sabi

Do you know how many feet and inches?
Tom
Click to expand...

I'll have to measure.
Tom

Isn't there a converter on the main site?
Tom

is it safe to ship this pleco?

Dec 25, 2012
jetajockey
My plan of building a pond in my backyard (Florida)