I have a 65 gallon tank with what did have 3 adult mollies and like 30 young. I only have one adult left and my babies are very infected. It looks like ick so we’ve been treating for ick but the infection is spreading and not getting any better. After awhile the ick spots get puffy so im really not sure what it is and what to do anymore. I’m very heartbroken as those adults i’ve had since their parents gave birth to them over a year ago I’m afraid at this rate i’ll lose my whole tank. One adult died a day or so ago the other one a few hours or less ago. I added some photos i took. I’ve been treating with paragaurd for almost a weekand the blue tint is because i put super ick cure in the tank before the photos. Can someone please help me.

edit: the last few photos is not a lighting issue, the end of his tail has become white from whatever infection is on him

I'd say it is a bacterial or protozoan infection. The fact that you allready treated for protozoans (Ich) and the finrot shown Inam.pointed toeards bacteria.

What's on the plants BTW?

Those aren’t real plants, it’s just a background that is coming off the back of the fish tank 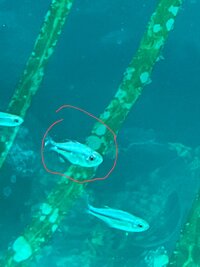 This one doesn t look good at all, my humble opinion he is not gonna last, but other fish could avoid the same destiny.

I known the feeling, specially seeing your fish suddently hidden, wiggling, being less active and die, I'm currently experiencing a ick, fish started to act exactly as i described, so before the medicine, i did a big water change, and dose my tank with aquarium salt,

API aquarium salt said tablespoon for 5 gallons, as my fish was not in good shape, i did a 1 tablespoon every 3 gallons, took less than 48 hours to see the a real improvement, none of them die. I did add a bit of medicine against ick yesterday, (a little, dro by drop slowy during the day) solution of mebendazole/matronidazole to help, but most of the work is done with salt

i decided from now one, heathly tank or not i will always add aquarium salt with every water change

I will also setup a Quarantine tank next week on my old tank, its the only way to avoid those sick from new fish / plants and stop wasting time on treating the main tank and checking in the fish their condition
You must log in or register to reply here.

7 Breathtaking Aquariums Around The World