Looking for some advice…

So, for the majority of my time fishkeeping, I’ve been into goldfish. After numerous swim bladder problems, kidney issues, loosing goldfish after goldfish by things I can’t control, it’s beginning to take a toll on me. I had to euthanize my beloved Emmy today due to severe swim bladder problems. She had been progressively getting worse and after several weeks of diets, antibiotic treatments, etc and I decided it wasn’t going to get better.


Right now, the only goldfish I have left is my little red cap Oranda. He has a very slim body and looks much less in-bred than any oranda I’ve seen. I’ve wondered wether he is a hybrid between an Oranda and some type of slim bodied goldfish, but I don’t know. He was a cheap goldfish.
That is probably the reason he is the only goldfish I’ve ever had that is actually really healthy. No deformities, no swim bladder problems, no kidney problems, no digestive issues. He’s a very healthy, happy, active fish. Because of his slim build, he’s a fast swimmer, has a big appetite and a fast metabolism.

Now he is alone in my 29 gallon heavily planted tank with just a few Kuhli loaches.

I’ve decided not continue keeping goldfish, for now anyways. I’m not saying I’ll never get them again in the future, but right now they are just to much work and worry. Goldfish are by far the hardest fish I’ve kept.

Now I’m stuck in the position of what to do with this fella. I feel like he deserves a beautiful pond or big Goldie tank with friends, but I can’t really provide that for him. Yes, I could let him live out his life in my 29 gal and he’d probably be fairly happy, but he’s a social fish and I do feel kinda bad. Deep down I really want to make this tank just a peaceful community and give up with the hassle of goldfish, but I don’t know what to do with this fella.

I guess I’m looking advise on what to do with this guy and with the tank. If I could, I would love to just have a little mini pond for him, but there is just no way in the world that will work right now. Do I just leave him in the 29 for the time being until my life changes and I get more space or do I rehome him?


For photo reference, this is him sharing some cabbage with a Kuhli. 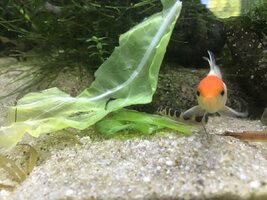 Could you give it to someone?

Could you give it to someone?
Click to expand...

I don’t really know anyone else in the fishkeeping hobby. I would probably have to rehome him on Fishlore (then there is the shipping issue) or Craigslist (kinda shady).

I’m open to ideas if you have any though.

Only LFS I have is technically a farm and garden store, but they sell fish and reptiles. I don’t think I could bring myself to give him over to their overstocked Goldie tank.

other than that there is a petco and a petsmart 30 min away, but again it’s petco and petsmart, you all know what those stores are like.

Only LFS I have is technically a farm and garden store, but they sell fish and reptiles. I don’t think I could bring myself to give him over to their overstocked Goldie tank.

other than that there is a petco and a petsmart 30 min away, but again, you know how those stores run.
Click to expand...

Well, unless you are willing to give it away on FL, it would have to live in the 29g. Or would it be possible to WAY over filter your tank and get a second one, if that would be more comfy for the goldie?

A pond/ lake at an old folks home/ retirement village?

You can still make a community situation using the noted 29 gal. & keep the healthy goldfish.
There are plenty of Barbs, Tetras, Loaches & catfish that can coexist with a goldfish.
In my area it's nearly impossible to trade in fish anymore.

It's tough to re-home a fish which you've cared for and raised for a period of time. Could do a search/check your area for Fish Clubs. I belong to one here, I was able to re-home some fish with confidence that they will be well taken of.

Good Luck!
You must log in or register to reply here.

Does My Goldfish Need A Companion?

Oct 27, 2021
Noroomforshoe
Is There Anything My Betta Won’t Kill?