Looking for advice - is my kuhli loach sick?

I got 10 banded kuhlis yesterday which are currently hanging out in quarantine. Noticed this morning when one was resting that they have a circular white mark on the side of their head and I am wondering if they are sick and I need to dose antibiotics. First time looking after kuhlis so a more experienced opinion would be appreciated 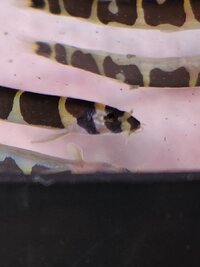 Looks like an injury to me. There's an outside chance the issue could be a bacteral pit, but probably not.
Loaches in general are very sensitive to medication & should only be treated as a last resort.
If you choose to medicate, consider, Microbe Lift Artemiss.

Thank you for the reply. As an update I went to the store and was able to talk to the one employee I actually trust. Turns out all the Kuhlis of that batch have been dropping like flies and he had to fish out 30 that morning when he came in after being off for the weekend. He has had Kuhlis of various subspecies for a long time and is especially worried because he hasn't been able to find anything identifiable which would be responsible and thinks it may be some form of internal parasite with which they were infected. He strongly recommended returning them for a full refund and dosing the quarantine with aquarium salt and then doing water changes weekly for a month to get it back to normal. I brought them back and saw at least 8 more dead in the tank. Now my quarantine tank is out of commission for at least a month because I picked them up literally the night before they stopped being sold. Inconvenient, but infinitely better than if I didn't quarantine.

TLDR: The batch had something seriously wrong with them and I had to return my kuhlis. Lesson in why quarantine is always a good idea.

Just an fyi I have found kuhli loaches to be extremely sensitive to salt and it will easily kill them. I won't use salt near them again. I also have found they are generally hearty but also very sensitive to bacteria infection. The last time i had a sick kuhli the only thing i found that was effective without killing them was furan-2 (which has been discontinued).

Well, dang, at least you quarsntined, and it sounds like you shopped at a good store. I have heard hat it is best to deworm all loaches before adding them to your tank. though I dont know what meds to use as they are sensitive.
You must log in or register to reply here.