Little "Problem Boy" Has Another Problem...

Hey all! Not many of you know about my beloved boy, Slate, a "problem boy" who's had many issues in the past, including being close to death due to Velvet (aka "Gold Dust Disease") twice. Well, now this sweet boy has yet another issue...some strange white spot on his head, somewhat in his skin, to what I believe could possibly be HOTH (Hole In The Head disease), though I cannot be sure. This boy is well taken care of (he's one of my favorite Bettas, and males are not my cup of tea) but I believe he has so many issues due to his abusive/neglective past (more info about this below) and probably being inbred (terrible genetics). Anyway, I was hoping some of y'all may be able to help me identify not only this spot, but his other potential issues as well. This boy is very close to my heart, and luckily he hasn't come down with any common issues like Ich or Fin/Tail Rot, but I would be absolutely devastated if he did not make it. I can tell he's close to me as well, with his very unique personality, and though he's been through unimaginable issues in his short life, I know he has fight in him. So if you can help, I would be very much appreciated! Thanks all

p.s. the "emergency form" has been filled out below to help give you a better idea with what I'm working with here. Two pictures of Slate are below for some visual reference

What is the water volume of the tank?
.Currently being kept in a 4c measuring cup
How long has the tank been running?
.Slate's hospital tanks change constantly, so this one has only been up for 2 days
Does it have a filter?
.No
Does it have a heater?
.No heater, as his heat mat keeps his tank above 78°F
What is the water temperature?
.80°F
What is the entire stocking of this tank? (Please list all fish and inverts.)
.Slate (approximately 7 month old male Steel Blue Veiltail; domestic Betta splendens) and 1 Ramshorn Snail

Maintenance
How often do you change the water?
.Water changes performed every other day
How much of the water do you change?
.30-55%
What do you use to treat your water?
.Tetra AquaSafe Plus (I believe that's the name)
Do you vacuum the substrate or just the water?
.Barebottom so water only

*Parameters - Very Important
Did you cycle your tank before adding fish?
.No
What do you use to test the water?
.API Master Test Kit weekly & Tetra testing strips every other day
What are your parameters? We need to know the exact numbers, not just “fine” or “safe”.

Illness & Symptoms
How long have you had this fish?
.Roughly 5-6 months
How long ago did you first notice these symptoms?
.His white spot showed up 2 days ago, the other issues he's always struggled with since being rescued
In a few words, can you explain the symptoms?
.Doesn't gain much weight, dull colors since rescue (I believe he may have internal parasites but I do not have medication for this), small white spot which is round and seems to be partially dug beneath the skin
Have you started any treatment for the illness?
.Epsom salt, pink himalayan sea salt, high concentration of tannins (not specifically for this possible illness but just to be safe)
Was your fish physically ill or injured upon purchase?
.Slate was very sick during the initial rescue
How has its behavior and appearance changed, if at all?
.Slate has become much more active, more lively, less stressed, definitely more personable, his colors have gotten slightly brighter since rescue, and overall he seems happier

Since being rescued, Slate has been very sick due to stress from his last living situation and likely terrible genetics/possible inbreeding. About 5-6 months ago I got a call from a volunteer (some of you may know that I run an almost licensed Betta rescue) stating she found a post on CL showing a blurry photo of one of PetSmart's tiny 0.25 gallon "Betta tanks". She stated how she could see virtually nothing except dirty, cloudy water. Being one of the best volunteers to the rescue (which I will not name either until the website is put up), she volunteered to drive all throughout Utah, crossing the Colorado border, then a few more hours until she reached the rescue. What a fantastic person she is! She constantly would text me how far away she was, when she was taking a rest from driving, and she would take as many pictures possible when she arrived. As soon as she sent me the pictures, I was stunned to learn how small of a "tank" this was, but not just that....I was astounded to learn the ammonia levels inside of the tank, which were exceeding 1 ppm, as well as the nasty water condition rittled with sickness that poor Slate was living in. When she told me he was alive, I could hardly believe it! "How could a young Betta live through such horrific conditions?" But I've been in the hobby for a long time, and I know Bettas will fight for their life if they need to. She then drove all the way to my house here in Colorado and dropped Slate off. I couldn't believe he was even alive, not to mention even being able to function in such high ammonia! I immediately started very slowly and gently drip-acclimating him to my water conditions, just to ensure I didn't stress him too much. When I very first received Slate, he was incredibly scared, frightened, skittish, stressed, and extremely emaciated. It looked as if he hadn't been fed in weeks! I presume his last keepers did this to try and make the water cleaner instead of simply doing water changes. I tried as hard as I could to avoid stressing him more, but I couldn't avoid it. When he was finally acclimated I started treating him for every disease I could possibly think of (besides internal parasites, since I didn't have the proper medication to treat this as the time). Around 5 months later, Slate is much healthier, much happier, but he is still not thriving. Poor boy is constantly being moved around from container to container, always being treated for one issue or another. As mentioned above, he is now being treated with Epsom salt (for possible digestive or swim bladder issues), pink himalayan sea salt (this works the same as "freshwater aquarium salt", but I do like this natural variety more), as well as tannins (tannins are antibacterial, antifungal, antiparasitic, and they even work as an algaecide!). I am now here to ask what health issues Slate may have in the moment with the info provided, and whether he will be capable of living a long, happy life. Slate absolutely will become a "foster fail" (though these really are more of a success), even though I haven't exactly thought up a tank idea for him, but I would like to hear your opinions whether you believe he will live a long, happy life with great care! If anyone has any information about him, I would be happy to hear from y'all! Thank you very much, and may you all have a fin-tastic day!!

Below are photos of Slate in his current condition. P.S. sorry for the low-quality photos provided. I was unable to get a good picture due to the unclarity of the plastic as well as the activeness of Slate himself. Hopefully y'all understand 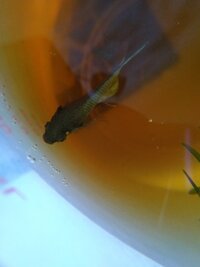 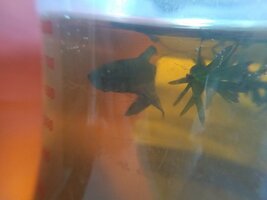 Edit: Here's a slightly clearer picture of the little white spot. It seems to have grown some sort of clear-ish "tail" on the outside? I have no way of explaining it, so hopefully y'all understand 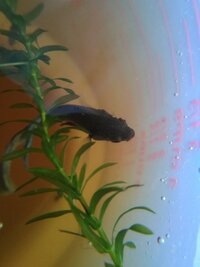 I'm by no means an expert, but could it be a paracite of some kind like flukes or anchor worm?
Upvote 0

I looks like the start of hole in the head to me but I've never dealt with that personally. Hopefully, someone else can give you a more definite answer. It looks like Metronidazole and Maracyn are the most popular treatment.
Upvote 0
You must log in or register to reply here.

A
Tumor or Abscess? Lipoma??

Dumbo betta has a fin curl, genetics or a problem?