Hi, I'm looking for solutions to my lighting problem...

I have been more than happy with these over the years as they are super bright, have great reflectors so there are no shadows or dark spots (more of that in a minute) and have a lot of red and blue light so make the colours in my fish, especially the oranges, yellows, reds and blues really pop - it looks fantastic.

In short, here in the UK, availability of fluorescent tubes is becoming difficult and very few people ore stocking these as folk mover over to the promised land of LEDs - including me, however from my experience so far, the Emperor isn't wearing any clothes.

My first experiment was the Fluval Plant 3.0 which I hated. Nowhere near bright enough even with everything on max, and the colour temp was not to my liking - far too yellow and green with nowhere near enough blue or red in the spectrum - my fish looked dead. Yes, I could get the colour temp close-ish to what I'm used to, but only by turning warm white off completely and having cool white at about 30% - which made the tank too dark. To add to this, the direct light source of a single strip of LEDs meant that for fish swimming in the front half of the tank, they were in shadow - not something I experienced with tubes and reflectors.

So I then tried Evolution Aqua tubes - a pink one (Colour Plus) and a cool white one - this was almost bright enough, but having two separate tubes with different colours meant that depending on where the fish where in the tank gave them different colours which is terrible, Plus, I still had the issue of shadows due to the direct light source of LEDs without the reflector qualities of tubes.

Having now tried twice and failed with LED's I'm about to give up, but know the end of the road for tubes in neigh and I have to find a suitable replacement.

To avoid shadows, I imagine I'll need a light that covers most of the tank depth from front to back, or at least three lights - front, middle and rear to avoid shadows.

Plus, I need LOTS of red colour and LOTS of blue colour, not just the odd LED amongst a sea of white to replicate the good old tubes that give off such fantastic light and really show the fish colours.

At this point I don't know where to start - can people recommend me LED lights that are VERY bright, have LOTS of red and blue colour temp, and either cover a very wide depth of tank to avoid shadows, or are inexpensive enough to buy multiples to avoid shadows and dark spots.

In other words, I'm all for embracing technology, but only if it improves on what I have and what I have now is great - no shadows, ultra bright and LOTS of colour - I want to maintain this with LEDs - where do I start, given the fluval plat 3.0 in mt experience didn't cut it by a long chalk.

Just for absolute clarity - I do not want shadows, so I single light running down the middle of the tank will not work.

Sorry to ramble, but my experience of LED in comparison to a pair of old tubes has been underwhelming to say the least.

You might check out the twinstar series. This guy has a pretty good run down.

You might check out the twinstar series. This guy has a pretty good run down.
Click to expand...

The Twinstar 1200 looks like it might do the job but boy, the price.... technology ain't cheap, eh?

Only other issue is that the tank is elevated in the room and from out sofa, we are looking up at it, so will be dazzled by the exposed LEDs

The Twinstar 1200 looks like it might do the job but boy, the price.... technology ain't cheap, eh?

Only other issue is that the tank is elevated in the room and from out sofa, we are looking up at it, so will be dazzled by the exposed LEDs
Click to expand...

I'm looking into one of the Finnex 24/7 LEDs for my 20 gallon then I stumbled on his page. I was actually looking for lighting to bring out the reds in plants. I took a look at those Twinstars, ang OMG, not in my budget.

Yes, their photos show them sitting way above the tank top/water line. If you chose them, you could possibly build a canopy, or a blind to hide them, but you would still have the top of the tank reflecting a lot of light. Don't know if that would be too much.

But they sure looked nice

I use the aquaneat on 3 of 4 of my tanks. It works well for my plants. The price is good too. The only issue I had was with the 6 foot light bar. The power supply failed in a matter of months. The replacement was only 20 bucks.

This is what I do for my deep tanks. I have one fixture with 90 degree lenses to force light down to my shorter foreground plants. In behind that, I have a 120° diode fixture that lights the top portion of the tank. But I do see shadows slightly when the fish are in the front at the very top.

So I would get two fixtures with 120° diode angles (no lens) and with enough power (PAR) to reach the lower plants. Keep whatever space you need in the middle of the fixtures to have light at the top of the tank like you want it. Bear in mind tho that light on the glass often results in algae, usually halfway down if anything.

A suggestion for inexpensive fixtures is Beamsworks DA series. One DA fixture is 48-60 PAR @22", putting you in the higher med light bracket. Two of these fixtures would be enough light to grow pretty much what you want. You might need a dimmer though, which can be hooked up to a generic dimmer.

I'm not sure about the spectrum for you, but I also prefer a 'pink' RBG spectrum coupled with 10000k white. The DA fspec is 10000k white, but also has red, blue and green diodes. The spectrum is not changeable.

Just some info, hope it helps!

I've had success with buying normal growlights for indoor plants. They are usually cheaper and I like having the little arm for each light

My tank is close to yours but I think 24” high. I have a finnex 24/7planted and a viva-grow 24/7 on it. Both 48” long. I have them both on the 24/7 setting. they are both adjustable to different light settings. I like the lights and the different colors during the day. I find them great for plant growth and have 24/7 lighting on all my tanks. Below pics of 2 different times. 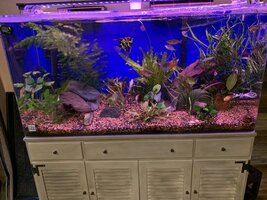 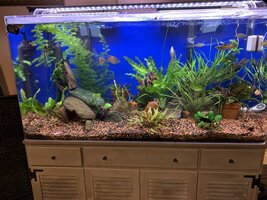 86 ssinit Thank you for posting that, so you can program any spectrum you want? Gonna look into one for my 120g!

If you're at all handy with electrical stuff, you could buy LED strips and retrofit them to your old reflective fixtures. That might give you the best of both worlds. Mount the LED strips along the curve of the reflector and you'd get some direct and some reflected light.

They do make LED strips that are much brighter than fluorescent lights of the same length. I've seen a demonstration where a commercial fluorescent fixture was retrofit with LEDs and the room as at least three times brighter.

You can get ones that allowing control of color. By mixing strips of different color and adjusting the intensity you should be able to get almost any color you want.

The very bright ones are pretty expensive.

This place has everything you'd need to get started. I've never dealt with them aside from spending time looking through their web site.

Often times DIY projects can save a ton of money. In the case of led lighting however, it's often times more expensive to build rather then buying a fixture.

My 6 foot light bar was only 80 bucks brand new. No way I could have built 1 for less.

Tx, I bought a Finnex 24/7 HLC to go with my Beamsworks. Big tanks need lots of fixtures! First time with a 'fancy' fixture tho!

How long does it take for a fish to recover from Ich?