I was just out buying some fish for my 20 gal, when I saw her. The biggest peppered cory I’ve ever laid eyes on. She was gigantic. So gigantic, in fact, that I decided to buy her for my peppered cory school. She’s a solid 4 inches long. 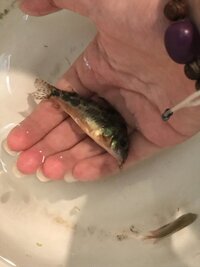 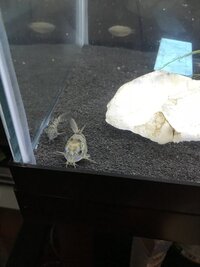 Has anyone ever seen a peppered cory this big? If so, how do they get this size? Is she really old, or just naturally huge?

She’s probably old, how long would you say she is? I know females usually get bigger than males, up to 3 inches.
OP

She’s about 4 inches. She’s almost the size of my youngest fancy goldfish.

She’s about 4 inches. She’s almost the size of my youngest fancy goldfish.
Click to expand...

Oh, I didn’t see that in the original post lol. That’s pretty cool, maybe a well cared for cory?
OP

Must be. She’s getting along with the other cories so far, but at first they were like “OMG what is that?!”

That's pretty cool. I have 12 peppered cories I bought in groups of 6. The first group was almost 2" and the 2nd group was smaller at less than 1.5". I was worried the smaller group wouldn't be accepted but they all get along great.
S

Yup those are the biggest peppers you can get.
OP

The biggest one in my tank before I bought her was a 2-year old, 2 inch long female. She’s now only the second biggest lol. The rest of the school are babies, under a year old, so they’re all fairly small.
S

The biggest one in my tank before I bought her was a 2-year old, 2 inch long female. She’s now only the second biggest lol. The rest of the school are babies, under a year old, so they’re all fairly small.
Click to expand...

Yup! Used to own 7 of them. So freaken cute!

They can even grow bigger than this !!!
Beautifully colored btw
OP

Really? How big have you seen them get? I’ve seen larger species but this is truly the biggest peppered I’ve ever come across.

I've seen huge ones that were kept in a pond. Thibk they were 1,5 to 2 times the size of this ones. Sometimes XXL corys (also other species) appear in the trade.
Don't exactly know where those come from.

For some reason, some Cory females get super huge, while others stay a bit smaller. I like to say they come in Large and Jumbo. I have a Peppered named Amber and a Bronze named Boris, they’re roughly the same age as I got them at the same time. Yet Boris is Jumbo, while Amber is Large.
The biggest Cory I ever owned was a female Bronze named Shineocean, she was about 3.5 inches. Lost her last winter, she was about 8 or 9.

My biggest was a pepper called Big Mum.
She died sone time ago grrrr
S

Oh my! That’s a big girl. I’ve named mine Large Marge. Lol. I hope she lives a year or two with me, although she’s probably fairly old so I don’t know how long I’ll have her.

My biggest at the moment are these C.aeneus. They're formerly known as C.macrosteus (what's in a name) and are twice the size of my normal bronze ones hahaha. 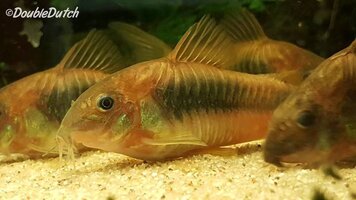 I think I’ve seen those at the same pet store I got her at. They do have some bigger species, not just the typical bronze and peppered.

All About Endlers Livebearers Care, Class And More!

The advanced forum search is actually rather good once you get used to it. You can search within threads, you can specify which sub-forums to search, you can search photos in the photo gallery section, etc. Check it out:
Members Only