How Do I Keep Sea-Monkeys?

I ordered myself the "Ocean-Zoo" set, which only includes the water purifier, the eggs, and the food, along with the measuring spoon. I also ordered myself the "Light-Up Ocean-Zoo Aquarium Cover", which is an alternate cover for the Ocean-Zoo tank but with a light in the top of it. I would assume that that would help algae grow to help feed the Sea-Monkeys. I didn't get any of the additional packets, however. I'm just waiting to see if they even hatch in the first place before I invest in any of that. After all, what good are the additional packets if you don't have any Sea-Monkeys to use them?

Does anyone have any tips or tricks for raising Sea-Monkeys? I really do love them, and I'd love to be able to maintain a healthy tank of them, so any advice is more than welcome

Hi woznyem
I don’t have an adult population of brine shrimp at the moment. I have kept them going until I wanted the tank back for another project . I am not sure why you think one species of brine shrimp will die out in a couple of days when the species has been on earth for more than a few dozen years.?

From my experience the mix of salt water and minerals is critical to keeping them alive for more than the life of the egg sack.
PH of 8 will increase the hatch rate.
A good salt water mix from the marine section of a pet shop will give better long term chances than plain sea salt.

I grew up with advertisements for sea monkeys on deck chairs wear sunglasses in the comic books from another time. Sorry I am more than sceptical of anyone that says they manufacture a creature .

a link to a gentleman that has brine shrimp breeding and raising the young and juveniles for multiple generations in a fish tank.
I suggest this is a good way of learning the requirements of all species of brine shrimp?

The reason that the NYOS breed lives longer in the Sea-Monkey aquarium than regular brine shrimp is because it's been bred to withstand the not so great conditions that Sea-Monkeys are kept in. The Sea-Monkey habitat isn't exactly your industry standard aquarium... It's an itty bitty little plastic thing, only 12 oz, with no filtration system, no heater, usually no lighting unless you buy the add-on, and usually no aeration unless you buy the "Million Bubble Air Pump", which they're not even selling at the moment. I plan on trying to use an aquarium air pump in my tank though, just to see how it works, if I can find an air control valve that keeps it from stirring up the tank too harshly. But yeah, the knockoff Sea-Monkeys only survived a few days after hatching, compared to the ones I had as a kid, which was before the knockoffs were being produced, and I usually got at least a year out of them before the ecosystem collapsed.
OP

I also found a mini under the tank heater online that's normally used for reptiles, and it reportedly only increases 10 degrees F higher than room temperature, so I'm gonna go buy one tomorrow and try it out once I get the tank in since Sea-Monkeys like it best around 80 ddegrees F. This time, I'm going all in on this. I'm gonna make my Sea-Monkeys live, gosh darn it!!

How do they raise the eggs to sell if the Knockoff species only lives a few days? That is an impossible statement.

80 degrees F is 26 de centigrade which is well within the range of most adjustable aquarium heaters.

I don’t know how water proof a reptile heater pad would be or if it’s considered safe to use under an aquarium.Be careful
OP

Because they would be breeding to get the eggs in a proper aquarium environment with heating, filtration, etc. They don't raise them in the little 12 ounce bottles that you keep them in as a consumer, that would be silly. I don't know what it is you're not understanding about the fact that Sea-Monkey kits are little 12 ounce "tanks" with no heating and no filtration. I've tried both kinds, and the Artemia nyos survive those conditions much better than regular brine shrimp like you'd find in the wild. It's like crossbreeding a plant to survive better in drier soil-- the nyos survive at a higher rate in these unfiltered, unheated, unaerated conditions than their wild counterparts. 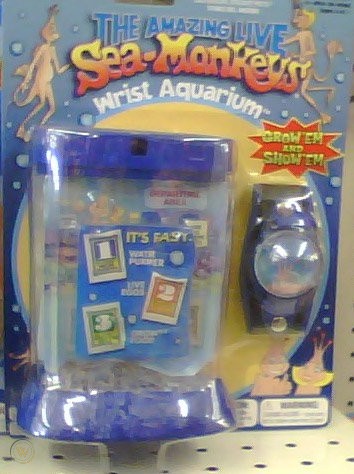 This is what the Sea-Monkey tank looks like. Included in this kit is a wristband you can carry the Sea-Monkeys in (I don't think they sell this particular wristband anymore), so just imagine the size of a child's wrist relative to the size of the tank. Not big at all. So I was thinking that perhaps the heating mat would be an ok option since it would not take up the entirety of the tank and also has less chance of frying the little suckers. I'm going to test it out before I put the eggs, though, to see if it's even a viable option. Gonna let it go for about an hour or so with water in the tank and then measure the temp of the water after the hour's up and see if it overheats it or not. So I'm not just doing this willy-nilly. Just an experiment. If it works, great, if not, well, it'll only have wasted like $18 on the heater, so no real harm done, and I can donate the heater to an animal shelter or something.
You must log in or register to reply here.
Share:
Facebook Twitter Reddit Pinterest WhatsApp Email Link