Just a story of my rocky/rewarding first timer experience :)

So this is more story time than anything else ;D

Almost a year ago I was in my biology lab class and we started doing a lab that involved observing Bettas for their behavior. I started feeling a bit nostalgic because when I was around 4 or 5 I had this Betta named Rainbow. (Now as I think more about Rainbow I remember I had him in the tiniest of glass bowls with some marbles.. Poor Rainbow). And that was when I decided I really wanted to have a fish tank. I knew I wanted to keep a Betta because they're so interesting and beautiful and have such big personalities but I felt bad keeping him alone.. I knew they were aggressive but even angry people need friends right...? nono
I looked up possible friends for my future Betta.. (the list wasn't quite long..) and I discovered the Dalmatian Molly.
Saw a bunch of videos of them together and thought "yes!! " and it did feel ... at least for a while...
Here's a picture of Blue and Spot living in perfect harmony (I'll let you guess who's who ) 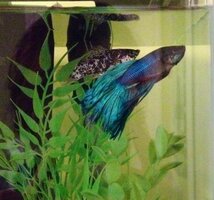 Then Spot started started getting these tears in his fin.. For a split second I thought it was Blue.. but I had never seen them fight and they would just swim around together all the time.. "Nah.. must be some of the decor.." And I thought this until I saw a perfectly round bite mark on Spots tail.. And that's when the aggression started.. I didn't know what to do because I really didn't wanna return any of them (I get really attached :-[). And I ended up buying Blue a separate 3 gallon tank (I thought to myself, "Man this fish keeping thing is getting expensive.." HAH.. I had no idea ) (I had also read of people buying 5 gallon tanks for Bettas and I thought they were crazy "All that tank for one fish??"...... but I'll get to that soon...

Blue seemed happy there for a while.. But then he started lying down more.. and he would only come up when I would feed him or trace my finger around the tank... but eventually he didn't even wanna follow my finger around anymore The water at the surface would also get this weird film.. I would take it out but the next day the film would be back.

Well.. the fish keeping hobby (or rather, obsession?) grew on me and I realized the tank with my Molly and Gourami (5 gallons.. I know, I'm ashamed to even say that) was much much too small.. (to say the least) but as I was quickly discovering.. Fish keeping.. yea.. not a cheap hobby..
So I looked everywhere for the best deal for a 20 gallon tank.. Walmart was selling 20 gallon kits for 50 dollars (but man how badly I wanted a 20 gallon long..) So I waited around until I could gather up the money for the Walmart tank and when I was right about to order it, like a Christmas miracle, one of the fish-keeping people I follow on Instagram who works at Petco posted a flyer: "Dollar per gallon sale" I later found out I would have to buy the hood and filter separately (Might as well start feeding my fish dollar bills at this point) but I thought I could at least get the stuff I wanted now instead of settling for the Tetra stuff that the Walmart kit came with.
Got the 20 and moved my Molly and Gourami into their new home ;D (My Molly unfortunately passed away after an ick infestation but my Gourami looks more beautiful everyday. He had been getting really pale and was always hiding but after the change in tanks and the change in food, (now feeding them New Life Spectrum Thera-A) he's incredibly active and vibrant;D)

But now I had an empty 5 gallon tank and a Betta in a 3 gallon tank who hated it as much as I did..
I cleaned up his decorations, bought him an Aquaclear 20 (originally had no filter for about a week when I first got the 3 gallon but then the film started forming and the water was getting murky so I got a Marina filter and it did a pretty great job keeping the water clear.. but eventually the film started forming again and I was liking the Aquaclear on my 20 gallon so much that I just had to get one for Blue (my bank sent me this cute little post card saying how if I go over again I'm going to have to pay a fee.. ops
I had now become one of those "crazy people with a Betta in a 5 gallon" but he seems over joyed, which makes me over joyed arty0049:
and here's a picture of him in his new tank. 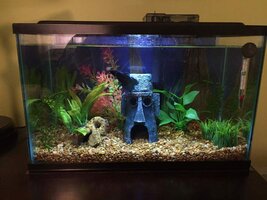 It's been a fun and rewarding experience keeping these fellas even with the stress that comes along when things go wrong (or when you're a newbie fish keeper and even when things are okay you think they're going wrong).

So sorry if this post just sounds like me babbling about my experience as a newbie (none of my friends like fish and I can feel them getting tired of me telling them about Blue's fin growth :rolleyes If you've gotten this far, thanks for reading!

Oh and if any of you could offer some advice, Blue seems to be a tail-biter, I've never seen him in the act and I thought it was fin rot but it never progressed and after looking online at other tail-biter pictures I realized that this must be the reason. I noticed it when I came back from vacation last July and I notice it has gotten better, but its been healing very slowly. Is there anything I can do to get him back to 100%? Again, thanks so much if you're still here with me ;D Makes me happy to know I'm not the only one who loves fish so much (maybe too much? maybe?)

Welcome to fishlore! Sounds like you had a tough start. The gourami is probably enjoying that 20 gallon.
Blue is beautiful! One of my bettas is a tail biter also. Toys might help keep him busy so he doesn't bite his tail. Try floating a ping pong ball or cork in with him.

Thanks! It's definitely been an adventure but its been fun learning along the way I'll have to try that thanks for the tip!

Sounds like you are well on your way to joining those of us with M.T.S (MultI Tank Syndrome)

Man you should be a writer. Great story. I agree with guppybreeder. Give him some toys to play with.

Thanks Thunder_o_b! Just trying to find the room for a third haha

Your welcome it helped stop mine from biting his tail.

Man you should be a writer. Great story. I agree with guppybreeder. Give him some toys to play with.
Click to expand...

Oh shucks, you're too kind thank you
I will definitely be doing that. I had a leaf hammock for him once that he loved. Just look at him tanning haha 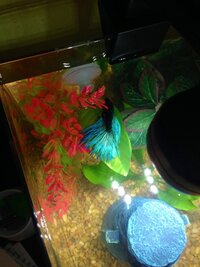 But unfortunately the wire in it started rusting and I had to get rid of it :/

Great story. I had a Betta and a Dalmatian molly in my first tank too. Did not end well either.

Great story. I had a Betta and a Dalmatian molly in my first tank too. Did not end well either.
Click to expand...

Sorry to hear that The Petco guy warned me not to.. but he also told me that a Nerite snail is another name for an assassin snail so I chose to ignore anything else he said haha

That means PETCO guys can be right half of the time.

How to take care of Rosetail betta

Tell us your betta adoption story and how its doing today

10 Gallon Tank Did someone say Betta glow up?