Member
I have noticed a change with my pair during the last 4 spawns. After their dance and initial laying of eggs and fertilization regimen. They are both attentive for about 1.5 to 2 days and then the female banishes him to the other side of the tank unless she needs a break. She does maintenance and eats the non-fertilized eggs then he joins in and they get carried away. Now usually the eggs are gone around in 3-4 days.
I have tried a shield around the cone spawn site, but it was too restrictive, not enough water flow and the eggs developed fungus. Still waiting with fins crossed to see wigglers again. When/if I get serious about raising some fry I plan on trying the gutter mesh as mentioned by coralbandit .

Learning all the time.

RollaPear said:
How are your black neons jmaldo ? I'd love to get a pic if and when you get time.
Click to expand...

Doing fine. Not the best pic but here you go. 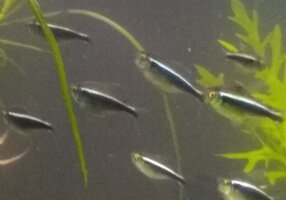 jmaldo said:
Doing fine. Not the best pic but here you go.

That shine comes through so you can see they're doing really well. Congrats! I find that pics are one of the most difficult parts of the hobby. I really suck at them. For every decent snap I get there were at least 20 that came before that were not even useable lol.

RollaPear said:
I find that pics are one of the most difficult parts of the hobby. I really suck at them. For every decent snap I get there were at least 20 that came before that were not even useable lol.
Click to expand...

Agree, 100%, I mainly use my phone and do have a Nikon D60.
LOL, I have thousands of pics, most are not ready for prime time due to focus, reflections and lighting, etc... But I keep trying.

Learning all the Time!

Member
Update before they were out of swimming room and after some "Underwatering Gardening":

Now what to do with all the trimmings, my other tanks are overflowing.

Member
Got this last night, the Black Neons found a nice flow from the output hitting the corner, 9 of 12. I do have 3 that are loners and prefer their own little group. 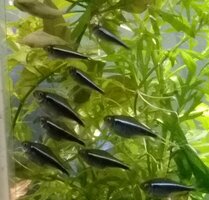 Member
I'm not sure if the site has a marketplace but perhaps you could bundle up the trimmings and sell them on?

Member
Yes there’s a market place. I usually just give it away. You can have them pay shipping.

Member
Thanks Guys,
I've used the BSTF thread before. Maybe I will "Pay it forward", for all the help I received from the community.

It appears my plan/dream of a Planted 125g Discus Tank has come to an end. Originally, started with 8 now down to 2. Sadly, lost the female of the pair that were spawning. A few weeks ago, noticed she was hiding from the male. Finally, coaxed her out of hiding and she was beat up pretty bad. Not sure what happened but the male continued to chase and attack.

Moved her to the 29g, tried to nurse her back to health, but… she stopped eating, became lethargic and I ended up euthanizing her. Over the last week or so I have tried the Alpha and Beta males together but they do not get along at all. So, now I have them separated.

It has been an enjoyable and at times a frustrating journey. Without a doubt I have learned so much keeping these beauties. "Thanks" to all whom have followed and offered their adivise, hopefully you've learned along with me.
Undecided right now how to proceed, but…

As mentioned the build title should be changed to 2x Planted Community with Discus. So onward I go. The inhabitants are:

Member
I have been following along and learning a ton from you so I'm truly sorry things didn't work out...

Cichlid males have a habit of attacking a female if she doesn't spawn for whatever reason. He's not trying to kill or harm her. The attacks are to get her to leave the area in order to make way for another female. But obviously in a aquarium that's not possible, unless you separate them.

I'd love to see you carry on with the species. From tagging along on your journey, I know you've learned way too much to stop but obviously that's just my opinion. I'll be tagging along regardless of direction.

Member
Sorry to hear of your losses Joe .Summer is always harder on my fish and me then any other time of the year.
Also always more active then any other season so maybe the lack of time and attention is part of the seasonal blues ?
Ride the horse at your pace so you can enjoy more and labor less is my approach when things get rough .

Member
Minuscule update. Everyone doing fine.
Due to the fact I have 7-8 dozen Electric Blue Acara juveniles growing out. And did not want to setup more tanks. Moved some fish around, should be ready for the LFS end of August.

Member
How much do you get for your EBA at the fish store? I am about to just sell all 30+ of mine for $40 as soon as they are big enough to move to a local breeder with a better setup for growout.

Member
tfreema
As mentioned in my breeding thread, this time I got $6 each along with the added benefit of 25% off on any purchases. They then sell them for $12 and up even as high as $18 each. I have found the dollar amount I am offered is often dictated by the size along with supply/demand. I usually grow them out to between 4-6 months majority are 1.5 to 2". Previous to this time, last year I was only offered $2-4 each, the year before $5-6 each. If I continue, if? I do need to get some new stock to keep the line healthy.
I understand I could get more on Aquabid and even selling here. But...

And a "Big Shout Out" to coralbandit, the originally pair of EBA came from him.

Member
Just an update of sorts. Due to my situation with the 2 remaining male Blues, unable to keep in same tank and not really up to the task of mixing in "New" purchases.
"Great Fish", just has not worked out according to my plan of a large tank filled with these beauties.
I have decided to sell at least one, maybe both. With my options limited due to this Covid pandemic. No Local Fish Auctions, and my inexperience in shipping a 6 or 7" fish.
I know some of you have mentioned an interest if I ever got some juveniles. So, anyone near Brooklyn Ohio interested. Send me a PM.
Last resort I am going to work out a consignment deal with my LFS.

Hopefully, by the fall I will be started a "New" build. The fun and excitement.
Still undecided, at this point.

"Big" Thank You to all whom have followed and participated along the way, it was "Fun and Educational". Learned so much from all of you.

Member
It has begun. Wanted to wait until I sold the majority of the EBA juveniles (7-8 dozen) but it may still be a few weeks. Decided to take down my 55g Discus Community tank today. "Big Thanks" Again to all whom have shared my journey and followed.