Hey all, I'm having a bunch of cascading issues with my 55g tank that's leaving me scratching my head. Here's everything I can think of about the tank:

Maintenance
Under normal conditions, I'll change around 20% of the water every 4-6 days. I use Aqueon's water conditioner, and I vacuum the substrate as much as I can during each water change.

Parameters
Tank was cycled before stock was added, I use the API test kits to check its parameters.
Parameters over the last 5 days: 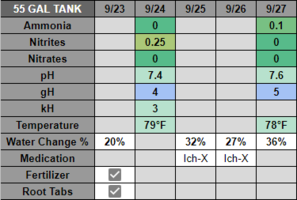 Feeding
The tank gets a random assortment of food once or twice a day. I'll use an assortment of Hikari algae wafers, Hikari micro pellets, Omega One blood worms, Omega One brine shrimp, Aqueon tropical flakes, and blanched cucumber for feeding throughout the week. Each feeding I'll usually grab a pinch of two or three different foods that'll reach each part of the tank.

Illness & Symptoms
Back on either the 24th or 25th, I noticed that two of my female gouramis and two of my plecos were starting to show signs of ich. On the 25th I changed a third of the tanks water, and then threw 27.5ml of Ich-X into the tank. The next day I changed a quarter to a third of the tank's water and threw in another 27.5ml of Ich-X per their instructions. Today on day 3 of the ich treatment the following happened:
- The ich had cleared up on the gouramis, and had mostly cleared on the plecos.
- One of my powder blue dwarf gouramis (male, super territorial, didn't have ich) had puffy lips (pic below). He definitely wasn't showing these symptoms the day before.
- One of my bolivian rams had turned mostly black (pic below), and was lying sideways on the substrate struggling to swim. It looked super thin, especially when compared to the rest of the rams in the tank. I don't believe it was showing these symptoms the day before, but as I wrote this post up I found it had already passed.

After noticing the ram and gourami's issues, I did another big water change and decided not to add more Ich-X to the tank.

The gourami with the puffy lips has been in this tank for almost three weeks at this point and seems to love it. His colors have gotten super bright, and he pretty forcefully defends the corner of the tank with the most plant cover that he's picked out as his own. His lips are puffy, but don't look particularly red. He's still eating what I feed him and scrounging for food off the substrate. I got him as a group of 3 (1m, 2f) nearly four weeks ago, but both the females I got with him died during the quarantine period from something they'd seemingly already caught at the pet shop. The rest of the gouramis currently in the tank were put in the tank just shy of two weeks ago after a quarantine period.

The bolivian rams have been in the tank for just shy of two weeks as well, the group of them lightly scuffle with each other periodically but generally don't pay mind to anyone else in the tank, aside the territorial gourami who shoos them out of his corner when they get too close. I've not seen them have any run-ins with any other gourami, or with any of the plecos.

Around the same time I was quarantining the batch of gouramis and the bolivian rams, I got the school of tetras currently in the tank. Over the week that came after introducing them to the tank, four of them died one by one and left me with 13. I initially suspected I acclimated them too quickly, or they weren't getting as much of the food I was feeding them as I thought, or some of them were just weak from their time at the pet store and were going to die if someone looked at them the wrong way.

The swordtail fry are a newer addition to the tank. They'd previously been in a 20g with a younger brood of swordtail fry and 5 sterbai corydora, but I began noticing some of the larger juveniles were nipping at the cories and decided to move them to the larger 55g to grow out some more away from my cories, who are dealing with their own weird issues with their slime coat.

The sponge filters seem to be keeping the water parameters acceptable, but there's been a lot of dead plant debris drifting about not getting sucked up (I think I've been stingy with the root tabs and my wisteria's not liking it). I added a powerhead with a prefilter attached to it to try and get some extra filtration going to clean that up a bit.

At this point I'm kind of at a loss for what's happening in this tank.
Did I the Ich-X trigger this with the ram and the gourami? I kept up on the instructions pretty closely.
I noticed when changing the water today that the ammonia levels in the tank sort of looked like they were a hair above zero, but it was hard to tell if I was just misreading the slight color variations in API's test kit. Would such a tiny bump in ammonia levels wreak this much havoc?
Is the bottom tier of my tank overpopulated? It's definitely busy, but I haven't been noticing an unreasonable amount of aggression. There's plenty of hiding places for the plecos and I feel like there's a good amount of sight breaks for the rams and gouramis.
Am I screwing water changes up somehow? I tend to just fill a 5gal bucket up with conditioner and temperature-matched water and dump it into the tank.
Is my water hardness contributing? When I noticed the ich initially I began cataloging the tank members' preferred hardness levels and found I was running things a little too soft, the Wonder Shells I threw in barely had an effect though so I got some SeaChem Equilibrium I was going to try out until this mess unfolded. The scale of this mess seems too extreme to be water hardness-related though.
Or does all this boil down to needing to slow down with adding new animals to the tank? I definitely rushed to get it filled after the cycle completed, but the filtration's seemed to keep up...?

I'm pretty lost. Sorry if this was a lot, I figured more giving out as much info as I could would help.
Any help in figuring out what I'm doing wrong is greatly appreciated! 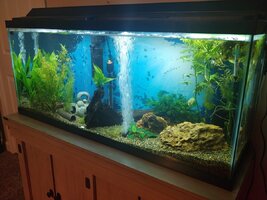 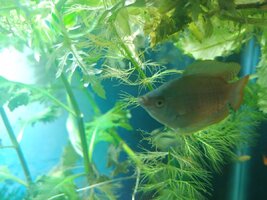 Dead bolivian ram: (note the darker coloring on the top half of its body) 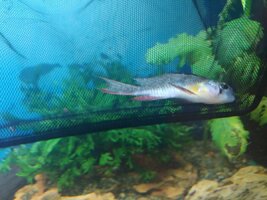