For 40 years I somehow managed to survive without having any aquariums at all. Before that I had kept fish for 10 years.
Last week the cichlid-bug bit me again ...

I learned about shell dwellers from Lake Tanganyika. Since I have only a rather small tank for them - 40L/10.5 gal water volume - I have hopes to find one pair of the tiniest species, Neolamprologus multifasciatus. 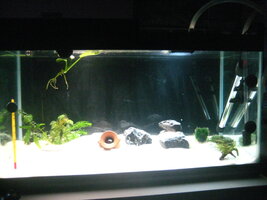 Apparently to them brood care is a collective matter: at first only the mother-female tends to the eggs, but when these hatch the whole tank population pitches in: adult fish, even older fry ...
To me, that sounds like: no cannibalism, no territorial disputes between dad and sons.

The 10.5 gal housed a Dwarf Red Blue Gularis, who had been turned into a kind of ragged banner by his twin brother.
I had him swap tanks with two tiny ladies loaded with eggs, clown killifish: 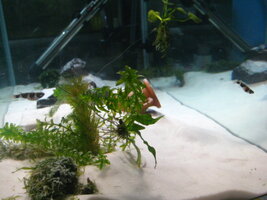 I have to continually move the latter around in my 5 modestly-sized-to-very-small indoor tanks , lest they be eaten by larger fish.. Tail and all they measure one inch and less.

Question.
Considering that they live under the surface of the water and given their modest behavior, can they stay?
- The multies are said to be bottom dwellers, the tank is 12" high.
- According to my fish-bible, Seriously Fish, (Pseudo-)Epiplatys annulatus should be kept in a group of 8-10.
I think the ladies need male company anyway, they seem near to exploding. At first I thought that their tummies were translucent orange due to brine shrimp naupliI they had eaten, but it must be eggs.

Thanks in advance for any advice!

Moderator
Member
Giving this a bump up for you