I have 8 harlequin rasboras (I think my profile still says 4 I'll have to change that later but I'm on mobile). Today while feeding, I noticed that my smallest rasbora's mouth is open and doesn't close. I saw him/her try to eat a small chunk of freeze dried brine shrimp and he/she couldn't do it because it wouldn't fit in their mouth. I'm not sure if he/she can eat anything, but since he/she is still trying I assume he/she can eat the flakes I put in there since I crush most of them to very small pieces. They all swim normally, eat normally (I think, but it's hard to see when there are 8 of them going at the food), and do everything fine. This one also has had a really small piece of his/her tail gone since the day I got the them. I'm not sure if this happened at the shop, or in the bag, but I noticed it right after I put them in the tank. Are either of these things anything to be worried about? I'm going to be leaving for about a week in 2 days and so they won't get food or anything. So I want to check here to see if this is something serious so that he/she doesn't die while I'm gone and create a lot of ammonia in the tank and kill the other fish. I wonder if one of the others is bullying him because he's small? They sometimes chase eachother around, but I assume this is normal behavior as there's usually no harm done. I've attached the best picture I could get of the rasbora. 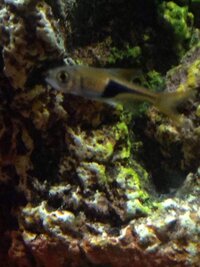 Looks like it might have something stuck in its mouth/throat. Catch it and have a quick look...

Yeah, looks like that to me too. My rainbowfish look like that when they eat pellets and the spit them back out.
OP

I caught it and tried to look at it more closely through the net, but couldn't really see anything. Should I put it in a container to see, if there is something, what could I do to help him/her (don't know how to sex them )
W

I believe the male have a straight edge on their pork chop shaped black patch and the female is rounded or curvy. My guess is male here
OP

wiedow said:
I believe the male have a straight edge on their pork chop shaped black patch and the female is rounded or curvy. My guess is male here
Click to expand...

Thanks! A lot of them are hard to tell, even knowing that
OP

It seems that there is a piece of food lodged in it's throat. At least I'm guessing because I can almost see through them and there's a little orange looking thing in it's throat and I can see it a little in its mouth (Orange is the color of the food, so one can only assume). What would be the best course of action to get it out? It's been like this for hours but I'm unsure of how to help it get the food out safely. I've never really handled fish before so I'm clueless as to how to do this without damaging its fins or gills :/
W

I've never experienced this. But my guess is wait a few more days. The food will generally soften and get either spit up or eaten ( hopefully ) I hope he pulls through!
OP

Update: it's mouth still hasn't closed and I was just looking at it and it seemed to turn upside down as if dead and then turned right side up again. It basically just swims in place most of the time unless scared (not schooling with the others). I'm afraid it may be on it's way out, but I'm leaving tomorrow and don't have another tank to put it in. It doesn't seem to have trouble swimming or staying in place but it basically just rolls over sometimes randomly. He's doing it pretty often, please help!

He might be having a swim bladder problem if he seems to be rolling on his side often.

Dom90 said:
He might be having a swim bladder problem if he seems to be rolling on his side often.
Click to expand...

He hasn't done it in a little while, but he doesn't really have any problems with swimming, buoyancy or anything. But if it is swim bladder what would you suggest I do? Feed him an unshelled pea before I leave? I'm doing a water change right now since I leave tomorrow morning for a week long trip and won't be feeding them...

I don't know what is causing it. I'm sorry your fish isn't doing well. I am concerned for you because if this fish dies while you are gone, the body could cause problems in the tank since you aren't there to remove it.
OP

alink said:
I don't know what is causing it. I'm sorry your fish isn't doing well. I am concerned for you because if this fish dies while you are gone, the body could cause problems in the tank since you aren't there to remove it.
Click to expand...

Yes, that is exactly why I'm worrying. As horrible as it sounds, if he's going to die, I hope he does it before I leave because if he dies tomorrow right after I leave, I'm going to come back to a whole tank of dead fish
OP

Well I talked to my parents and they said one of my older sisters is going to be coming over everyday to get our mail anyway, so if he's not dead tomorrow morning (Hopefully not), I'm going to text them while we're on our way down to see if when they come over to get the mail, they could just go up and check if there are any dead fish and maybe every couple days (I'll be very specific in how much to feed) could feed a tiny pinch of food (I think letting their systems clear out a little might be good). I had a platy die at night once and he created .25-.5 ammonia by the time I got to him in the morning. It was a good thing he was the only one in the tank, but hopefully not too much ammonia is created before my sisters find him in the event that he does die. I figured this little one would be a little weaker when I first got him since he's so tiny. He kind of gets pushed around by the other fish sometimes.

Good luck with your fish!
OP

ClearEyes said:
Good luck with your fish!
Click to expand...