Is this flukes or parasites in my aquaponics system?

Tank
What is the water volume of the tank? Tank size: Aquaponics system with 120L (30 gallon) tank with a 70L (18 gallon) sump. Tank is mostly bare bottom with a solids lift out to remove solids.
How long has the tank been running? 2 years
Does it have a filter? massive sump with mechanical filter and 3500 dc pump
Does it have a heater? yes
What is the water temperature? 25 celsius (77 farenheit) (with heater)
What is the entire stocking of this tank? 2 siamese algae eaters, 4 swordtails, 3 rosy barbs, with some shrimp in the sump tank.

*Parameters - Very Important
Did you cycle your tank before adding fish? Tank is a couple years old and fully cycled.
What do you use to test the water? Test strips (not the best I know but good enough for me)
Ammonia:0
Nitrite:0
Nitrate:10
pH:6.8
GH: 6
KH: 6

Illness & Symptoms
How long have you had this fish? Sick fish are newly purchased about a month or two ago
How long ago did you first notice these symptoms? Shortly after purchase
In a few words, can you explain the symptoms? Fin rot, receding gills, red spots on belly, once quarantined also saw bloating and pop-eye in one eye.
Have you started any treatment for the illness? Did esha 2000 for fin rot.
Was your fish physically ill or injured upon purchase? One had fin rot when purchased.
How has its behavior and appearance changed, if at all? All the really sick ones are dead/euthanized, but fearful that the remaining fish are getting sick.

Explain your emergency situation in detail.

Recently I purchased some new fish and they have since been dying (I didn't quarantine them, stupid me). I got 7 rosy barbs (4 big and 3 smaller ones) and 1 male swordtail to add to the existing 3 swordtails and 2 Siamese algae eaters. I also have some shrimp in the sump.

The first rosy barb (1) had fin rot when I got him. After a week or so it was getting worse and I noticed another one (2) had a spot of fin rot as well and what seemed like white patches on it, so I quarantined them with another one (3) that seemed to be separated from the rest and always looking down (ie. all 3 small rosy barbs). I did daily water changes, a salt bath and medicated with ESHA 2000 for bacteria infection. They were there for about a month. The one with severe fin rot was breathing quite quickly and got constipated and eventually ended up dying. Number 2 ended up getting pop eye in one eye also. After another ESHA treatment and a couple weeks I re-introduced the other two back into the tank thinking they were better, but in the tank light I saw that they were white and had more red on them, so I took them out and euthanised them.
During quarantine the fish would always flash when changing water and would sit still most of the day.

During this time, in the main tank, one of the large rosy barb just died over night, and the male swordtail appears to have visible white gills and has just started breathing quickly. Additionally one of the Siamese algae eaters has a white mark on him, although as I was cleaning the tank the other day he got spooked and swam up the grave suction hose so it could be an injury from that.

My fear is that it was flukes or some parasite that killed off the other fish and the remaining fish are also infected. So far there is no flashing in the tank, but the white gills on the swordtail fish is a concern. 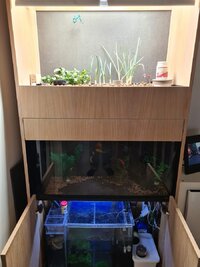 Fish 1 dead, can see some bloating and some red marks on under belly and anus 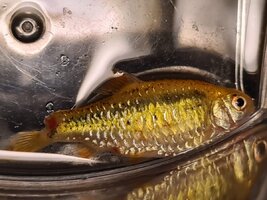 Large rosy barb that died overnight with bloated belly. (a day or two before I had fed a new dried worm food, so its likely he could have swallowed too much air when eating) 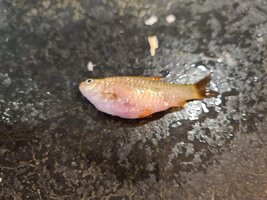 Fish 2 and 3 after a freeze. Can see the red spot on the tail of fish 2 and a red stripe on fish 3 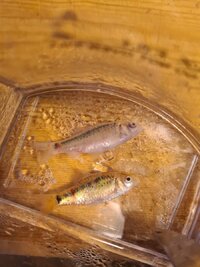 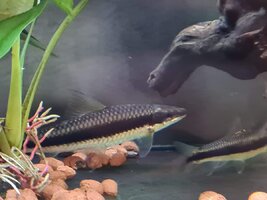 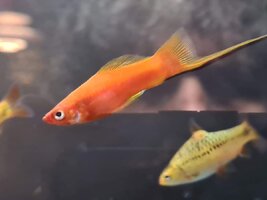 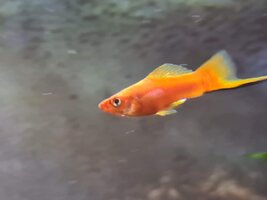 Also a bit of white gills on a female 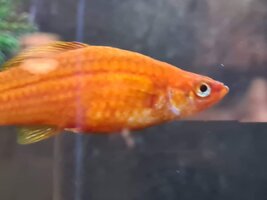 Also a video of the male swordtail gils Google Photos

Just FYI aquaponics systems still use up minerals and micronutrients in the water which need to be replenished.... if the fish are deficient in them their immune system becomes compromised leading to health issues. Not sure if that is the cause of what you are seeing but just something to think about
Upvote 0

Thanks, I do occasionally suplement potassium, iron, calcium, magnesium and seaweed extract, but this is more for plant deficiencies. I do monitor the calcium and magnesium levels and they seem fine.

The other fish have done really well for a long time, so I'm just worried about what killed the fish and if they have infected the others.
Upvote 0

Thanks, I do occasionally suplement potassium, iron, calcium, magnesium and seaweed extract, but this is more for plant deficiencies. I do monitor the calcium and magnesium levels and they seem fine.

The other fish have done really well for a long time, so I'm just worried about what killed the fish and if they have infected the others.
Click to expand...

The elements needed for growth extend far beyond that list.....zinc, copper, selenium, boron, manganese and more.... Usually these are needed in such small quantities that with water changes you never have to worry about them. But with no water changes at all, they can get used up and if you trim the green onions and vegetables, they get depleted even faster.
Upvote 0

But with no water changes at all, they can get used up and if you trim the green onions and vegetables, they get depleted even faster.
Click to expand...

I do top up the water as it evaporates and is used up by the plants, but very very rarely do I change the water. I have however just done a 30% water change, and will do another one in a day or so to see if that helps the fish.

Additionally, the reason I supplement with the seaweed extract is to also supply those micro nutrients.

My biggest problem with the indoor aquaponics system is dealing with humidity and mildew, but having a fan on constantly and chosing the right crop helps a lot.
Upvote 0
You must log in or register to reply here.

T
Flukes/parasites that cannot be beat?