Is This Angelfish Sick?

This angelfish has spots on his fins, is it sick? If so with what and what do I treat it with? 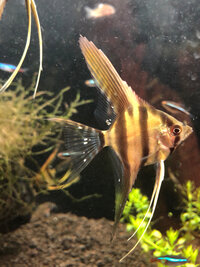 Thanks!
Nick72
Member
Looks too big to be Itch.

Following to see what others think.
Nick72
Member
Bumping this to see if anyone can help.
KaptainStache
Member
My angel had 3 spots. I watched him closely for a week. I thought it was ich but didnt see any change in behavior or diet. No flashing. Spots are gone now. Hope yours goes as easily as mine did. Good luck.
fjh
Member
Several on my angels have something similar. If the white is flush with the scales, don't worry about it. When I first noticed it, I researched the heck out of it trying to figure out it was and apparently there is a virus that can cause it, but some angels also develop it naturally. So if the white on the fins is the only symptom then no cause for concern. You might see more appear abd over time they will slowly revert to translucent or yellow.
angelcraze
Member
I have seen a few posts of angels with similar spots. The consensus was calcium deposits. There was some debate it was scar tissue or Lymphocystis virus, but I think it was boiled down to calcium buildup.

Magicpenny75 recently got some angels with similar spots, as far as I know they are doing great.

It's weird though, I've only started to see this recently and I've been into angelfish for more than a decade. It didn't seem to be a thing of concern though, only a cosmetic thing and they might even drop or fade away.
MomeWrath
Member
Yep. Looks to be the same thing mine have! Weird that this is showing up so much without any definitive answers! The weird part for me is one cleared up and the other has not. They're in the same tank so there's no difference on their care or water. I can say though, I've had them about two months now and the spots are the only thing I can really find wrong with either one. I'm about to update my own thread on this... If you want to see the timeline just search for "I'm so embarrassed" lol.... I'm on my phone now and not sure how to link the thread directly.
goldface
Member
Why do people think it might be calcium deposits?
MomeWrath
Member
I think it's a disease, honestly, but I don't know what and not hiring a fish vet so...
angelcraze
Member

Idk, someone said pros on FB said it calcium deposits. I'm not on FB and never saw it before...... It doesn't look quite like Lymphocystis, and all the marks have been on angelfish and all look the exact same.

I'd love to know for sure though! Like I've said, I've seen it 3 times recently and never before this year. But I just thought I missed it somehow.

Anyone else care to comment? Has it been seen before this year?
MomeWrath
Member
I saw more angels at Petsmart yesterday with it. I didn't get mine at Petsmart and they were in the next town over... At least we know it shouldn't be terminal. Mine are both doing fine now.
Share:
Facebook Twitter Reddit Pinterest WhatsApp Email Link