Is this a Rabbit Snail?

I'm curious. I've had invasive snails that look similar but they don't have such a long shell. (In this picture he's slightly turned but its' hard to see via perspective so he looks a little shorter). He's fairly small, I moved him into my baby shrimp tank for now.

The reason why I say I'm wondering if he's a rabbit snail is because I do have a rabbit snail in my main tank (where this snail came from), but his skin is yellow. This baby is chocolate brown. The shells are similar color wise. I know they can breed once every 4-6 weeks, and I assume that maybe the current rabbit snail I have is carrying sperm (Again, I only have one rabbit snail right now.)

I've been hoping for a few more so this might be a blessing 8) I'm just wondering cause the color is different anyways. I know there is an invasive snail that has this sort of shell too so I'm curious.

First I'm attaching a picture of my current big girl rabbit. Here (she had that chip on her shell since I got her not long ago, not sure if it will heal up, but I hope so!) 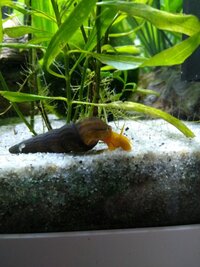 Now for the baby: 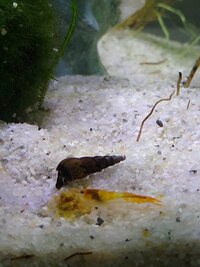 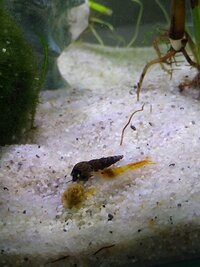 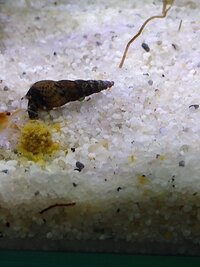 The one is question is an adult Malaysian trumpet snail. The chip out of the orange rabbit is already healed, shell damage does not return to normal but rather any flesh exposed calcifies and seals the wound with white deposits.
Upvote 0

Dang, ok thanks! That's the invasive one then 8(
Upvote 0
You must log in or register to reply here.

Is this a Rabbit Snail?

What snail is related to this shell