Is this a cyst, parasites, a tumor? Treatable?

Feeding
I feed him once a day, about two mouthfuls
I've been feeding him Saki Hikari Fancy Goldfish Balance and Hikari Algae Wafers, he eats the plants in his tank too. Since he got sick I threw the food away just incase and have been feeding him peas only. I'm switching to repashy supergold for now.
Do you feed frozen? Yes sometimes bloodworms, the repashy will be frozen. I defrost it first though.
Do you feed freeze-dried foods? I don't think so.

Illness & Symptoms
How long have you had this fish? I think about 10 years.
Noticed symptoms about a week/ 2 weeks ago.
Symptoms: Large lump on his left side, scales protruding, white "stuff" coming out, hemorrhages at base of scales, fins, mouth.
Treatment so far: eSHa 2000 (in the UK, antibiotics are not an option). 3ppt aquarium salt in the tank water. Can't change the water for the next 2-3 days while treating with eSHa. Would like to be doing water changes, if anyone has a workaround please let me know (For example can I just add back in what I take out?)
He is acting, eating and going to the toilet normally.

Explain your emergency situation in detail.
I first noticed his left side was a little swollen, I kept an eye on it but soon after started to panic. I decided to remove all of the aquarium gravel incase anything was trapped in there - like bacteria. A little after that I switched out a small amount of filter media as usual. As the days went on the swelling got worse, and scales starting sticking out more and more. Hemorrhages appeared at the base of his scales where the lump is, at the base of his fins, and around his mouth. Now his left side is very swollen and on his right side the scales are protruding a small amount. A few hours adding eSHa 2000 (yesterday morning) I noticed these white things at the base of one of the scales on the lump. After watching them for a while i'm fairly certain it is either puss draining, or some kind of parasite coming out. It doesn't seem to move on it's own though so i'm more inclined to say it's puss. It's really upsetting, is he going to die? Is there anything I can do? No one seems to know what this is, i've posted in 7 different places and i've been researching non stop. For now I will continue with the aquarium salts (3ppt) and eSHa 2000. I have eSHa exit, melafix and epsom salts on standby.

How long have you had the fish?

How long have you had the fish?
Click to expand...

I'm sorry you are going through this. That is quite a lifespan and a long time to be together. The only time Ive seen something like that was in the wild. I was fishing near an oil refinery and many of the fish had growths like that. It made me wonder which of the thousands of chemicals from the refinery had caused that to happen. I would think that if it's a growth, there is little you can do for him. If he is eating and acting "normal", I doubt it's parasite. Fish behavior often changes when a parasite is involved. As a suggestion, I wouldn't alter the diet - that change could stress the guy. I like your idea of changing water more but be certain to condition it to match the water he is used to. I would complete the coarse of treatment, observe if it helped and then try something else. I would warn you not to over react and over treat. You're doing the right thing - investigation of the wealth of information and experience in the forums might help you reach a diagnosis. Until you know what it is, frequent water changes and keep things stable for the guy. Try not to stress him out. Breathe. Do what your doing and keep learning. It's hard to stay calm but that is what will be best. Please keep us posted. You guys are in our thoughts.

Thank you, it is horrible to see him like this. He is acting listless today, just laying at the bottom of the tank. There is still stuff coming out of the lump and his poops are now are thin and translucent in some areas. Does this mean it could be parasites? I gave him his last dose of eSHa 2000 today, I don't think it's helping. I am very wary of over treating him, i've read that a lot of fish medications are just small doses of poison, and a lot of people unknowingly kill their fish in an attempt to save them, it's very sad. Even looking on amazon the other day I came across medications containing formaldehyde and cyanide, which is quite worrying. I have also noticed a slimly film growing on the air stone. I know I have to do something though but I'm not sure what to try next. 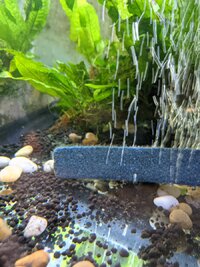 All medication is poison on some level. Are there other fish in the tank?

No he's my only fish

There is no sense in isolation other than to eliminate environmental problems. But that's not a bad idea.
You must log in or register to reply here.