Is My Setup Good For My Two Fancy Goldfish’s Lifespan Or Should I Eventually Get A Bigger Tank?

I’ve got two fancy goldfish, one fantail named griffin, and a new oranda named nebula or neb for short. My tank is a 40 gallon breeder, I’ve got two sponge filters and two aquaclear/ fluval 70 HOB filters and They filter over 600 GPH. I use seachem products like seachem Matrix biological media in one filter and marineland bio ceramic filter rings in my other filter because I found out about the other biological media after I had bought it. I also use an ammonia remover in one of my filters that I change monthly. I’m pretty constant with water changes and I do at least 2 per week even though I don’t really need to do that many changes is this setup good for a couple years? Can it house them permanently? Or should I aim to eventually get another tank once I am able to get a job and earn my own cash( I’m Turing 16 this year finally!!! what tank would you guys recommend after this one? A 55 or a 75? My fish are currently happy and healthy right now although I’m still saddened over the loss of my other goldfish nugget... he was fine and healthy but then our power had gone out due to a storm, ( I was in my room at the time of the outage so I was able to act fast and made sure to keep all my filter media wet and put my biological media in the tank right as the power went out so thankfully I didn’t lose my cycle. And I was performing water changes daily after it had gone out so my water parameters were safe. He acted slightly wonky one morning and was unable to eat because of it, and then during the night he couldn’t swim properly and was jittering on his side, I tried feeding him a pea but he wouldn’t eat. I gave up and put him back into the tank, the next morning he was laying on his side dead. He looked completely healthy when I examined him so I have no clue on why he really died. Then my goldfish griffin started acting super scared and skiddish again because that’s his personality when he’s alone without a friend.. he was fine and healthy but he just stayed in his cave and wouldn’t come out unless he wanted to be fed. I got so depressed and frustrated during this time because I hated seeing him so unhappy. I just recently got a new oranda for 40$ and so far after having him for a week he’s Doing so good he’s very healthy and him and griffin get along super well ever since I acclimated him to the tank. They are so adorable, they swim with each other and hide with each other. Nebula is still getting used to me and his surroundings, but griffin is acting happy and normal again with a new friend. he is now getting back to constantly begging for food and swimming around happily again. I’m so glad I was able to get such a healthy new friend for him. I love them both so much :> they mean the world to me. Back to the original question though, should I eventually get a bigger tank or is this setup good for their lifespan? Here’s some pics 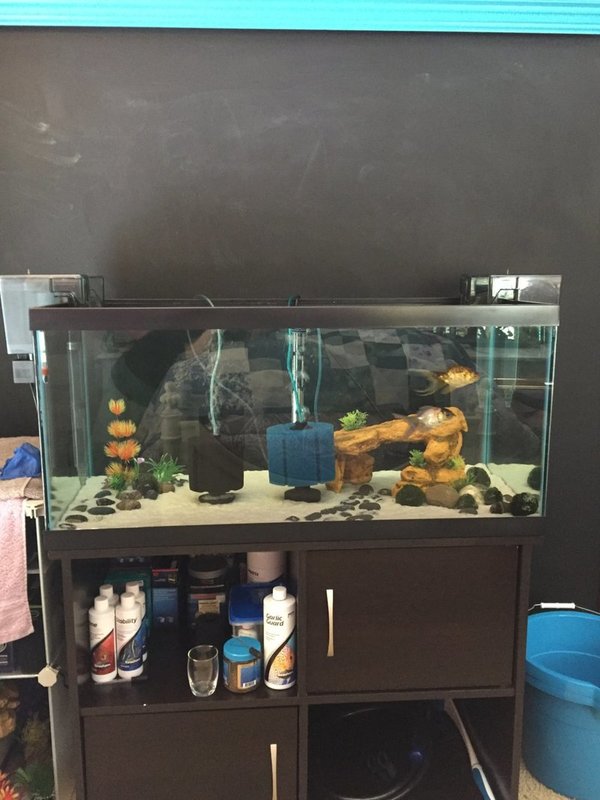 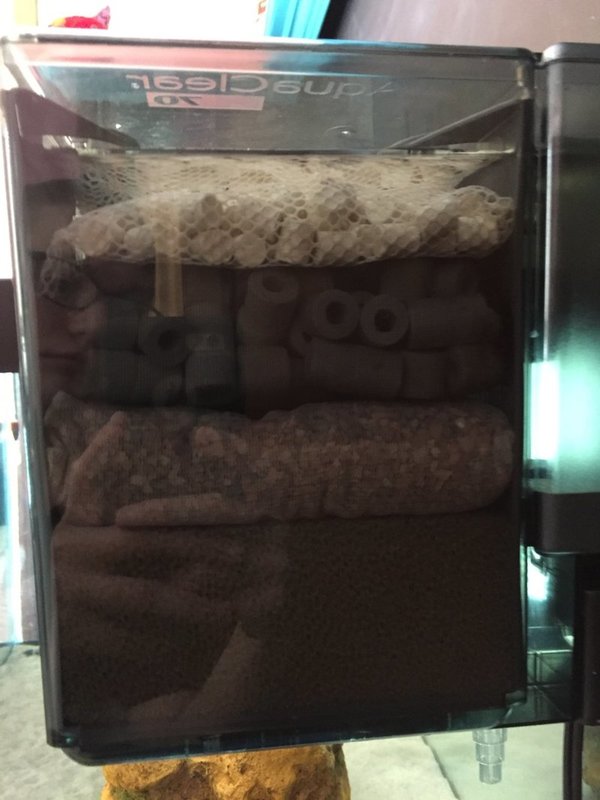 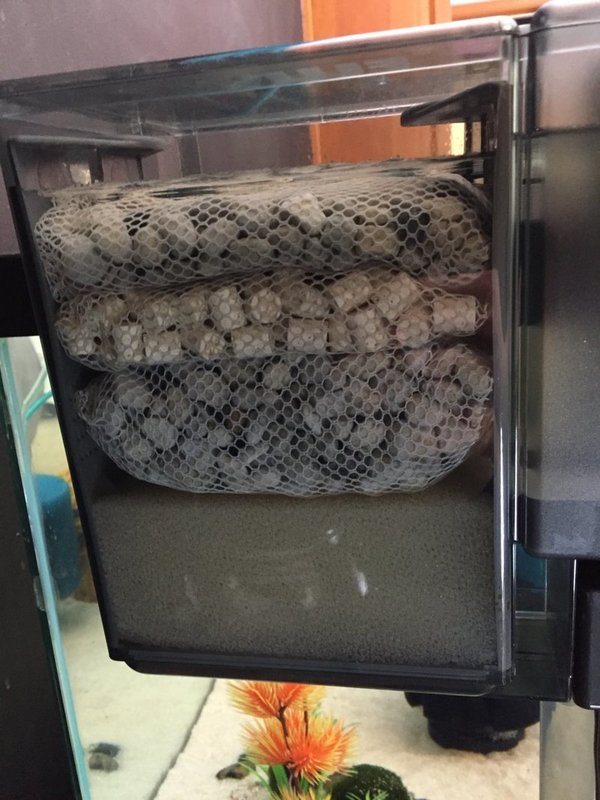 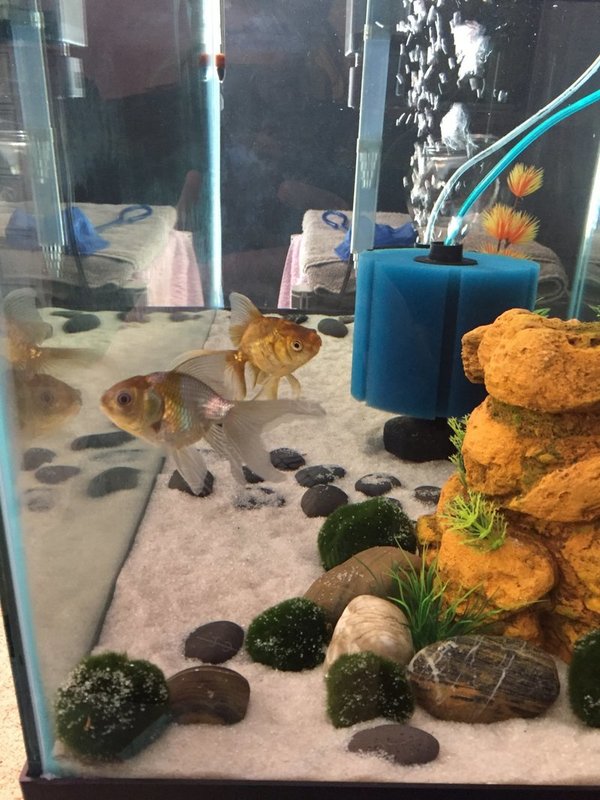 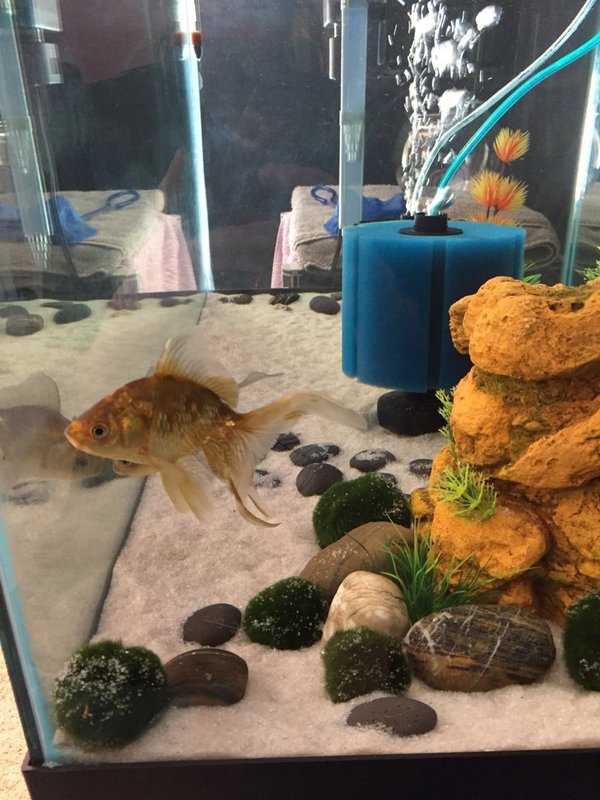 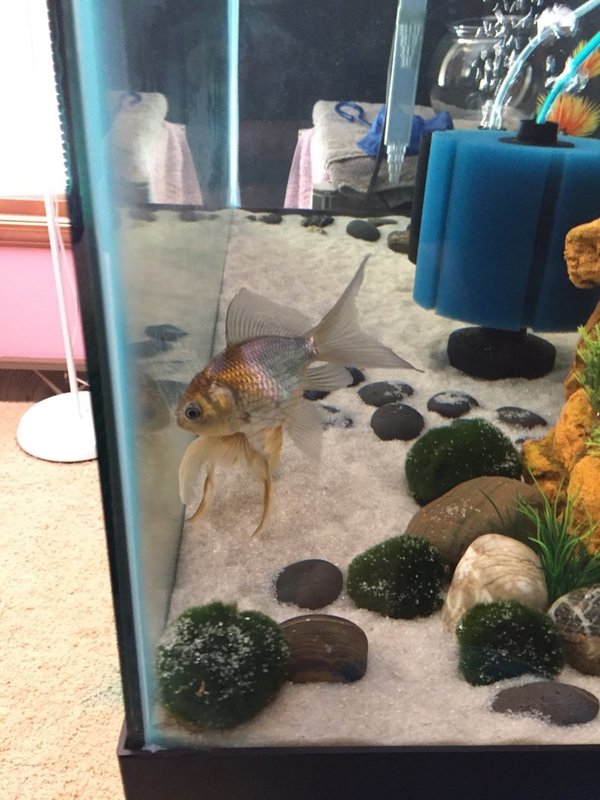 It looks great! You could leave them in there for life. I have my 4 fancies in a 55 gallon with a bristlenose pleco so mine is a little overstocked but I also do w’c’s twice a week. Sounds like you are doing everything right! Of course, if I had the chance to get a 75 gallon I’d jump at it. Lol

Goldiemom said:
It looks great! You could leave them in there for life. I have my 4 fancies in a 55 gallon with a bristlenose pleco so mine is a little overstocked but I also do w’c’s twice a week. Sounds like you are doing everything right! Of course, if I had the chance to get a 75 gallon I’d jump at it. Lol
Click to expand...

Same here girl! But everything is so expensive it ranges from like 400-700$ for a 75 gallon tank with a stand. I’d have to find a place to put it as well. I would probably have to move it to the basement because it would be so huge and heavy. Although the fish would love it since they are so big and roomy! I hope you can eventually get a bigger tank for your fish I bet you’ve gotta be on top of your water changes with all those fish since they are big ol poop factories but goldfish are so vibrant and social when kept in proper conditions. Except my goldfish griffin when he’s by himself. He’s just a big ol scaredy cat, he’s always been really scared of everything ever since I got him. He doesn’t handle being alone very well. But once another fish is with him he’s completely fine and quite social. He’s quite the character.

I have so many fish right now that my head is spinning. Two of my goldies laid eggs and I moved them to a 10 gallon tank. I now have about 35 baby goldfish fry. Not to mention my fancies in the 55 gallon, my tropicals in the 29 gallon, and my commons out in a pond. I must be nuts! lol

Goldiemom said:
I have so many fish right now that my head is spinning. Two of my goldies laid eggs and I moved them to a 10 gallon tank. I now have about 35 baby goldfish fry. Not to mention my fancies in the 55 gallon, my tropicals in the 29 gallon, and my commons out in a pond. I must be nuts! lol
Click to expand...

Oh my gosh that’s a lot of fish to take care of, how the heck do you manage everything?! You’re practically drowning in fish I wish you lots of luck on those new goldfish fry what type of tropical fish do you own? I also have two Betta fish in a separated ten gallon with two corner filters and heaters. I used to have two commons/ comet goldfish before my fancies that I rescued from my classmates and eventually had to get rid of since I can’t afford or manage a pond for them it was a super stressful time for me since I didn’t know what to do, I eventually gave them to a local fish shop. I do love comet/ common goldfish though, they just get so big! I wish they stayed small since they are such beautiful fish. I’d love to see pics of your fish!

Your tank is fine ... you can house those two fish for their entire lives in that.