Is my Serpae Tetra having fin rot ?

My Serpae Tetra has this white region on the end of his fins. But when I google Serpae Tetras, they all seem to have that white area, however it is even on some fish, and uneven on some others.

He's been like this since I bought it, maybe a week and a half ago.

It doesn't seem to get worse, and he's not acting weird. He's eating well, is not hiding, he's even chilling with my 7 black skirt tetras like they're in the same school.

And if it's fin rot, what should I do ? I don't have a hospital tank but I have some big plastic containers if really needed.

Also, what will happen if nothing is done in time ? Can it affect my other fishes too ?

I also have a Dwarf Gourami, a school of different types of Black Skirts and a school of Khuli Loaches in the same tank. 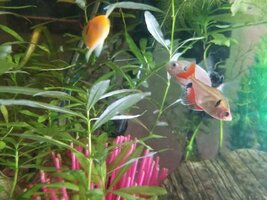 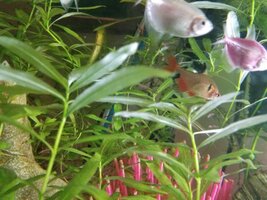 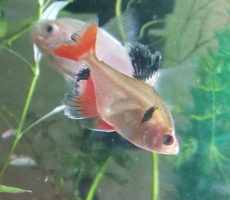 OuiBonjour DoubleDutch 1. Because you said it was like that when you bought it, you said it isn't getting any worse and because I think it is a long-finned variety I would consider the possibility that it is entirely healthy.

2. It is also possible that it suffered some fin-nipping from conspecifics while at the LFS and that these are now healing.

3. The white on the fins is quite normal I believe.

4. Why would your fish have fin-rot in a healthy aquarium. This is usually down to poor living conditions and you didn't mention those.

That is what I think is going on above. However, you have the fish and will have made more detailed observations.
Upvote 0

Thanks ! I'm kinda reassured to read this.

1. I also think it is a long finned variety. When I look at picture of them, of google, a lot of them have irregular outlines on their fins, as well as that white-translucid area. It seems to be regular with them, but on the other hand when I look at pictures of fin-rot it looks similar as well lol That's why I was concerned!

2. Very possible! I did not look at them long enough in the LFS. I know they were more than 6 of that species but there were also some other species and I don't remember which ones. I do know however that I have not seen any fin-nipping in my aquarium, even if my Serpae is alone in his specy. Strangely, he is acting like he's part of the school of Black Skirts, and they don't seem to act differently with him than they do between themselves. There is a little bit of chasing in between each others, but no biting and it is spread evently between all the tetras (no apparent bully, nor no apparent bullied)

4. You are right. In fact I didn't know before now that Fin-Rot was in link with the water. I thought it was something any fish could get for some reason. Knowing it is caused by bad water kinda reassure me since as far as I know my water specifications are good. I test my water very often and Ammonia and Nitrites are always at zero. Nitrates are always between 5 and 10 ppm, usually I do a small WC when it reaches 10. I also do regular WC once a week. I did not check hardness KH/GH and all of that though. However PH and temperature is pretty constant.

Thanks for your detailed answer. I will still continue to look at the fins to see if it seems to worsen. So far it seems to be pretty constant !
Upvote 0

OuiBonjour Its a lovely fish and I hope it continues to thrive in your aquarium.
Upvote 0
You must log in or register to reply here.

Aug 4, 2016
TexasDomer
Wondering if I could mix long fin serpaes with regular ones

Guide To Getting Plants To Turn Red Or More Colorful