Is my nerite alive or dead?

I've had this Nerite for a few months, and he has never moved much, but was always still on the glass. He seemed to be hibernating, and I wondered if he was injured. The last few days, he has been on the substrate and hasn't moved. I just picked him up to see if he was alive and accidentally dropped him a few inches and this piece fell off. His shell still looks normal, so I think it must have been on the bottom. He doesn't smell, and the water parameters are normal after a 50% water change (I didn't test before.) Ammonia=0, Nitrite=0, Nitrate=5. Do you think he's alive? Or did I just kill him when I dropped him? He's just in a bucket of water right now. I'd wait to see if he moves, but he rarely moved when he was alive, so that's not a great indicator. 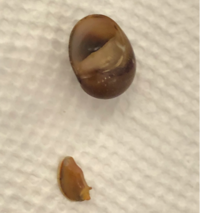 if the trapdoor comes off it is 100% dead. i don't actually think you killed it by dropping it though, i think it might have already passed on before you picked it up.
You must log in or register to reply here.