Is my guppy aborting pregnancy

Hi all,hope everyone’s having a great day!
I’ve got a 58 litre tank that I’ve had for just over 2wks (doing a fish-in cycle,I’ve been receiving some awesome advice from fellow fishlore members,although I’m sadly not able to get a water testing kit until tomorrow and I honestly cannot wait to order it,I’m getting the API freshwater master test kit),so I have 4 guppies only (3 females and 1 **** little black tuxedo male,he’s relentless lol),as soon as I saw the females I saw straight away that 1 was heavily pregnant,within the same day it was also apparent that a second female was also pregnant,I’d guess around half way although I’ve had them 2wks now,and now the third female is looking possibly early pregnancy.
I’ve got a little 10 litre tank and filled it with fluval substrate (I have gravel in my other tank) and 1 fake and 1 live plant,2 single mini air sponge filters,a 25w heater,and filled it with water from the main tank as the heavily pregnant female was staying away from the others and kept doing that floating in 1 place kinda swimming (over the last couple weeks she’s been repeatedly showing labour signs only to stop and start again) and to keep putting her into the breeding box wasn’t working for this as I felt it was causing too much stress and so I got the 10 litre tank for birthing and then to raise the fry in.
I recently read a post on the aquarium club forum which showed poop in sausage strings with little black bits going through it,the answer given to this was that the pregnant female guppy had actually aborted her pregnancy and that this is how they dispel from her,I found this really sad and this morning I was horrified and so stressed as I looked in on my little Oregon girl and saw a poop matching that description perfectly,stuck on the live plant (I will attach photos of the possible abortion poop and also photos of the pregnant females (sorry my male photobombed it lol he’s a character),the female that’s produced this poop is still looking pregnant so right now I just have no idea what’s going on.
The seachem prime I ordered has literally just arrived so I’ve dosed both tanks because it’s only been just over 2wks so I’m doubtful the cycles finished yet although my water has been cloudy for around a week now (I added tetra safestart when I first set up the 58litre tank but not sure if it’s worked) so not sure if it’s a bacterial bloom,so I thought it best to dose straight away with prime to at least get the parameters that are the most important on an even level where it’s safe for my fish,their erratic swimming has instantly calmed so I’m happy to see them acting like fish,I’m getting some more live plants tomorrow too but not sure what else I need,if anyone has any suggestions for stuff I’d need (I’d rather have treatments etc and not need them than need them and not have them) I’d be very grateful as I’ve not kept fish for over 20yrs so I’m trying to soak up all the info I’ve lost over the years,I’m thinking some methylene blue as my smallest female has a bite took out of her side fin that’s not healing very well so I’m not sure whether methylene blue or melafix would be best.
thanks guys and hope everyone’s good 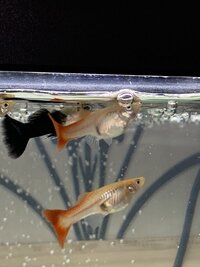 Hi Ceta,
You seem to have this under control?
Continue with the frequent water changes in the cycling tank . Try to keep the adults alive at this time of less than ideal water parameters. Changing some water every second day or so gives you the best chance of the adults surviving and dropping lots of fry in a couple of months.

Moss and frog bit are good plants but plastic take away food containers work just as well. Anything to give the adults a place to rest away from the others.
It is my opinion that I see more aggressive behaviour from fish in water that is not ideal.

Flyfisha said:
Hi Ceta,
You seem to have this under control?
Continue with the frequent water changes in the cycling tank . Try to keep the adults alive at this time of less than ideal water parameters. Changing some water every second day or so gives you the best chance of the adults surviving and dropping lots of fry in a couple of months.

Moss and frog bit are good plants but plastic take away food containers work just as well. Anything to give the adults a place to rest away from the others.
It is my opinion that I see more aggressive behaviour from fish in water that is not ideal.

Thank you ever so much,I apologise for the delay in replying,I wanted to action the advice you kindly gave and hopefully update with some good news.
So I did a water test today (using api freshwater master test kit) and the results are:
PH: 7.2
Ammonia: 0ppm
Nitrite: 0ppm
Nitrate: 20ppm
Although so far there’s still no fry,I’m just sat here singing no guppy no fry instead of no woman no cry (hope that made you laugh ;D),but the weird thing is that the guppies including the male was still flashing so I treated with Esha 2000 and 48hrs after the last dose I did a large water change,then a further 48hrs later I planned to do a 30% water change but got carried away with cleaning the gravel and ended up doing another large water change (this was last night) but it kinda worked out well because I’d bought a new ornament and wanted to rearrange the tank to make the ornament the main feature with the plants around it,plus I popped a little air sponge filter in too,and today I was amazed,the cloudiness had gone and the water was crystal clear! Yay for sponge filters,absolutely ingenious inventions. But the guppies (not just the pregnant females but the male too) are still flashing,they’re also gulping at the surface so thinking possibly ick? but any advice here is greatly appreciated because I’m really worried as the 1 female was already pregnant when we got her a month ago and I’m concerned that whatever is causing the guppies to flash is what’s stopping her giving birth (I’ve heard from several people that guppies can intentionally hold off on labour or abort if any issues such as inappropriate tankmates,moving whilst pregnant,bad water quality or illness),and so far she’s gone through a lot of those,I just really don’t want to lose mum or fry,mum is a inquisitive little character who always comes to the front of the tank and follows me whenever she sees me,she’s a lovely little girl so any advice is greatly appreciated,I’m considering treating with Esha exit to see if it’s ick,but as I’ve had these guppies for a month now I’d have thought I’d see white spots by now but I’m not noticing anything like that but the symptoms fit otherwise,it’s very puzzling so I could really do with some help figuring out what’s wrong so I can fix it.
I’ll attach a picture of my tank now.
I now also have 2 albino corys (looking like a male and female,facepalm) and a juvenile bristlenose that’s approximately 2inches in length and has basically hid since we got him until last nights water change and tank rearrangement,all night he’s been swimming across the floor,up the back of the heater then slides along the air curtain bubbles until he gets to the middle of the tank,then he goes to the top,then swims upside down across the surface of the water until he gets to the other side of the tank,then slides down the glass to the floor and does the whole thing again,I’ve had plecos before but never seen behaviour like this,he/she already has tiny spikes at the edges of his/her mouth and he/she has such lovely markings,I’m happy to see him/her exploring the tank at last but I’m not sure if this behaviour is cause for concern or not.
Hope you have a wonderful day!

The fish MAY have parasites but I doubt it’s ich.
When a tank has ich we see a few spots one day and more the next .By day 5 there are dozens of spots. In a fortnight fish are dead if not treated. At least this is how the Australian heat resistant strain behaves . Literally dozens of spots in one week.
I am not saying the fish have parasites but many life bearers do. They are notorious for having worms.
There are many different internal parasites that fish can get. Live bearers that eat each other’s poop ( before starving) and are raised in large numbers in ponds often have a few worms without any apparent problems.


I suggest you continue with what you are doing but wait a week or more before adding DIFFERENT medication to the fish. It is stressful on fish adding medication often you don’t want to over medicate?

Most importantly did you test your tap water for nitrates?