In need of a cockatiel expert! Feather problems

HI guys! I was hoping you could help me out
We recently purchased a cockatiel! We did our reaserch, but it doesn't mean we are experts. We purchased a cinnamon pied cockatiel from a pet store (bad idea I know but we pitied it since it was smaller and more shy then the others, apperantly it was about 4-5 months old). The pet store looked aweful and she shouldn't have supported it by purchasing a bird but we love our cockatiel

But i'm seeing a problem with it. (Saying it cuz we were not 100% sure on the sexe, we think it's female). We though she was just preening, but it's almost been a month and her feathers look aweful! She has no bald spots and isn't itchy, but her feathers are just ugly, it looks like she doesn't groom herself, especially around the neck. Also the other day (her wings are clipped) she decided to jump off her playground and landed pretty hard on her bum! She tarted to bleed! but only when she would try to fly and land on her bum! No dripping, no blood in her poop, no blood on the ground the next morning. (We checked her out and I noticed like a scab or a dark lump under her tail (i'm going to take the time to clean it up good today to see in detail what it could be).

Does anyone know what might be wrong with her? She also has a friend who we adopted (pearl lutino?) who was from a breeder and you can just see the difference in quality! As much as we love our pet store bird we don't want her to get the other one sick 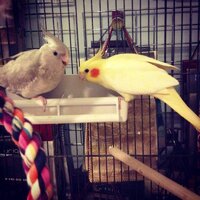 If you say the
Petstore says she is young she must be molting feathers. She looks like a cinnamon white face cockatiel. After she gets her new feathers if hear head turns all white she is a male if stays the same she is a female. Beautiful birds.

Thank you! She's doing great now! Feathers are looking better and better everyday! She loves to be petted and to play! She also know the command "yes" by shaking her head up and down. (Trying to teach her no is a little harder). Where she came from was aweful! A bird mill. When we got her, her health and feathers were in bad shape and her tail was missing. She came a long way! With good foods, greens, calcium and "showers" lol I'll send an update pic soon! 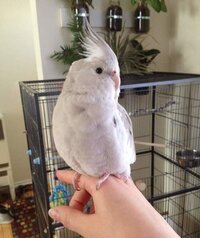 Went from no tail at all to a "half tail" lol 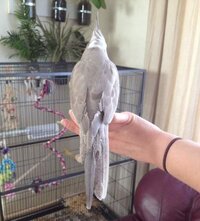 I love her white patch! Would be all white if she was a male, she's had it ever since she was a baby. 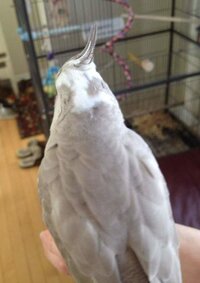 She looks beatiful! Thank god you save her.
In not sure but she is only white face cinnamon cockatiel. If the was pied she would have less grey and more white on her body. I seen those white patches on the back of bird. My male baby birds have them but it's yellow and there gray split pearl. 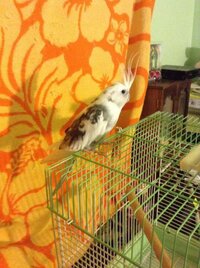 That's how male white face pied looks like, he is my favorite boy (he is not cinnamon).

its probably molting. now keep one thing in mind, the molting faze on birds is really critical. try to reach the diet especially on calcium and vitamin D as it enriches the feather. Give lots of variety of fruits and veggies and if you see that their not doing good on eating that stuff get some multivitamins. I use liquid cus its better and they have to drink it. Another thing is the Sun. If you have a better weather then here in Saskatchewan and some Sun there nothing like getting the Vitamin D from the Source. Another thing is to keep an eye on her and see if something stresses her out. If its the partner (probably) try to put her in another cage but still, close to the other cage with the male.
p.s. she looks gorgeous

Oh sorry I thought her head patch was a pied thing! I LOVE your bird! What a cutie! And the lutino pearl is now gone. She was just a temporary visiter since her owner was hospitalized. Thanks for the help and tips! She is just a joy to our family and we want to take good care of her

Oh sorry I thought her head patch was a pied thing! I LOVE your bird! What a cutie! And the lutino pearl is now gone. She was just a temporary visiter since her owner was hospitalized. Thanks for the help and tips! She is just a joy to our family and we want to take good care of her
Click to expand...

Thanks,you should see his wife my favorite. The lutino pearl was beatiful. Your welcome if you have any other questions just ask.