So, just today I got a new “baby girl” betta from Petco for my 20 gallon community/ betta sorority tank. I acclimated her and put her into the new tank. After exploring her new home for a little bit, she swam up to my dragon scale female in the tank. Once they looked at each other for a little while, the new female darkened up in a matter of a few seconds and displayed vertical white breeding bars. The dragon scale started flaring, as did the new female and they began “showing off” to each other. Then they began to nip each other’s fins in a bit of an aggressive way (although no fins were actually torn/ripped). I then took out both of them and put them in cups because the new female was a bit aggressive towards the other fish as well. So my question is; is my dragon scale a male? There wasn’t any bubble nests in the tank which I’d assume you’d find if it was a male with other females. The other thing I noticed was when the dragon scale flared at the new female, I saw a beard come out which isn’t apparent when any of my other females flare (or at least not that big of a beard). When “she” isn’t flaring, you can’t see a beard, and there is a very small egg spot on her. I’m just now very confused, as this has happened to me before— I had a male in the tank with females, not realizing it was a male until a few weeks later when I noticed a nest in the tank— but I just can’t tell with her. Can someone please tell me if she is actually a he? Or maybe the new betta is just very confused? Thanks in advance! 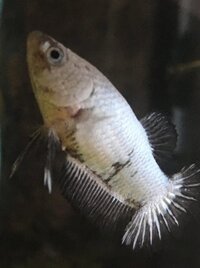 Sorry the picture got cut off in the first post

Looks like an egg spot to me. Some females can be territorial and become aggressive when other females are introduced but I’ll wait for someone else to chime in for a second opinion 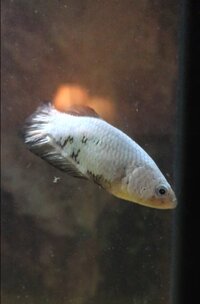 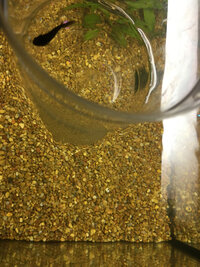 So, I found the start of a bubble nest next to the new girls cup this morning. The female that might not be a female was kept in a separate cup last night as well. What is happening? Do female bettas build nests?

Jun 3, 2021
BigManAquatics
Is this a Male or Female Betta