Ich with only one or two spots that disappear and reappear?

My electric blue acara and three of my glowlight tetras have been developing small white spots the past couple days, just one or two spots each. I thought it was ich so I slowly upped the temperature to 86° and have been closely monitoring and doing some water changes. The spots fell off but reappeared, not completely sure if they're in the same places or on the same tetras. I also did notice a tiny spot on my angelfish's fin which quickly disappeared.

The blue acara, which seems to be infected the most, has been hiding a bit more and acting a bit lethargic it seems, but otherwise eating and seems alert, no gasping at the surface or anything dramatic. Haven't really noticed flashing behavior. But it's never been more than one or two spots and it doesn't seem to have spread beyond this extent. Does this still sound like it could be ich, perhaps a more mild outbreak? Normally with ich, doesn't it quickly spread and start covering the fish more?

I'm trying to make sure I'm not actually dealing with something else requiring different treatment. If ich, I may also need to start using ich meds soon to kill it, in combination with the higher temps. With plants, snails, and a pleco, salt isn't really an option, at least not in worthwhile doses. I've never dealt with ich, so it's all new to me. Could this be some sort of bacterial infection instead? I recently did a deep clean and stirred up a lot of detritus and mulm, and probably bacteria as well. (Bad idea, lesson learned. I believe this stress, along with the addition of unquarantined new fish two weeks ago, is what caused this,whatever it is.) 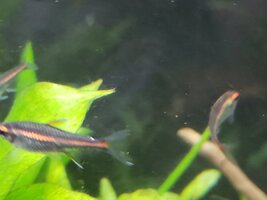 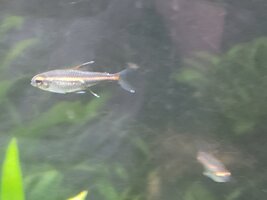 Ich-X should be safe for the snails and any scale-less fish you might have, if you need meds.

In my experience, ich spread pretty quickly and a lot more spots per fish. Think all the fish in those tanks had spots the day we noticed it. My wife did most the treatment stuff though and it has been a few years, so i may be remembering wrong.
Upvote 0
You must log in or register to reply here.

P
One white spot on a platy--not responding to ich treatment?

When to turn heat back down after fish no longer show signs of ich?