Ich, sudden aggression, or are we getting ready for babies?

I have six angelfish - two are older and bonded instantly the second they laid eyes on each other (I'd say they're about six months old now) - and the other four are all juveniles as well, but much smaller. Always have got along fine.

I noticed ich on a couple of my black neon tetras and the molly, so I have treated the whole tank (500L) with Blue Planet White Spot remedy.

I also cranked up the temperature.

My bonded pair have always been delightful - very solicitious and sweet to each other. Last night suddenly what I think is the male started charging after what I think is the female really aggressively - and the other angels too, but mostly his partner. She was terrified (has always been timid) and was fleeing and hiding, but he would flush her out and chase her again.

Eventually he settled but he's quite menacing - he is keeping her close and often almost boxed in.

These are my first angelfish so I don't know what's normal and what isn't.

I turned the temperature back down a little bit and he seemed to chill (pardon the pun) but he's definitely still antsy. I wouldn't be too concerned if he were just chasing the others away from her, but she seems to be his main target and when I say they usually love each other I mean they LOVE each other. It's beautiful.

So are we looking at signs of mating here? I have to reiterate that I don't know their sexes at all - so I could be completely wrong about what is happening. But it was totally sudden, spontaneous, and out of nowhere to my eye (not being a fish myself, it could have been coming for a while but I didn't see it).

It's very possible. One of my male honey gouramis has been through a few partners (for various reasons. It's not his fault), and he was incredibly sweet with his last one. They were closely paired, and he never tried to spawn with the other females in my tank.

However, with his first partner, he was a nightmare, and I had to physically remove him from the tank a few times between spawnings because he was so aggressive. I just had to do this last week with my other male, too (they hate this and get very stressed out, but it's necessary for the overall health of the community. It's like hitting the reset button on my males).

While gouramis and angels are very different species, I have heard that male angels can also get very aggressive. My guess is that it's likely early spawning behavior. Fish who are not affected by illnesses present in the tank will still spawn.

If you think the female is stressed enough that it could kill her, then I'd take the male out for a few days. Otherwise, let it play out. Because they're young, they're also likely establishing a social hierarchy in the tank, which can get pretty aggressive before it calms down in some species.

I hope this helps!

Angelfish, well there's aggression. My pair fights quite a lot. my adult males spar over a pecking order and whos boss, the juveniles are carefree,,,,, so far.
The thing is, and it's the important thing, you want to monitor them for damage. if there's not damage happening, it's just routine. if fish are getting hurt, it's more than that. I think it's maturity.

My juveniles are coming up on 6 months, in about 10 days. that's about mature size, and from then to about 10 months they could mature at any time, they all might not be "full size" at 6-10 months, but they will be mature.
When it happens, it's like a switch has flipped and the dynamic changes, gets pretty aggressive with everyone, asserting he's the dominant one and the best choice. the female is kind of like "whatever" through this, but she will have to accept him. the females are the more dangerous if she refuses him and he won't go away, she can kill him.

So, is it like this still?
or is it becoming a combat zone and kind of standoffish? if it's getting standoffish and tense and little skirmishes, it's likely at least the male has matured, and the fish he's keeping close and away from the rest is the female and he's asserting his position, waiting for her to catch up in maturity and hoping he's the choice for her.

youll see this little guy in the bottom left corner, still small, chasing the little guys, that's for sure a male and he's vying for the dominant male position of the little guys, there's 4 adult males in there,the little guys all know to move out of the way for the big guys. So far the adults haven't detected any females, But in theory the big males should pick up on a female,then easily beat all the little males away without much fight, and I should be able to identify the females quickly (at least thats my theory) the females should be "rustled" by the bigger males and protected.

but I think that guy has caught the scent of a female in there and now practicing to be a tough guy to show off. that or he's matured first and showing off for the rest that he's a big boy too.
(there just has to be at least a couple females in there) and that's the start of the aggressive behaviors as fish mature and females appear they get a lot more aggressive.
My 4 large males don't have this behavior, I removed the pair from them, and so they didn't learn to be really aggressive. I can't put the male of the pair in this tank though, he will destroy everyone or die trying to assert his dominance.

the dominant male, all of 7" in height and 6+ inch from mouth to tail. those points on the tail fin are a good early indication if it's beyond a squabble and that damage is being done. you want to keep an eye on their fins in general. Dominant males will most all of the time have their fins flared, dorsal wide and erect, pectoral fins rarely tucked back. it's not a guarantee, but you'll know a rooster when you see it. LOL 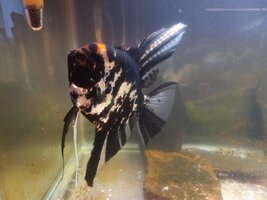 Temperature isn't a problem, I breed mine at 82F, I had them at 86F. I've had them at 76F. they get more energetic and eat more in warmer water and more sluggish and eat less in cooler water. the aggression wouldn't be coming from that.

I've seen males and females do damage, however, I've never seen a male go on the attack until it kills another angel. Females absolutely will do that. if they refuse a male and he can't leave the area.... if two females want the same spawning site.... Maybe a dominant male that has spawned would go that far with other males, I'm not sure. I've never seen it and I don't trust him to try it out.
You must log in or register to reply here.