Well, about 4 months ago our goldie got ich. We treated it with Kordon Rid Ich Plus after some gentler treatment didn't work. Today, during a WC I saw a single white dot above one of his gill plates I'm afraid this is a recurrence. Thing is, during the initial illness I read that fish are unlikely to get ich again after the first time. Is there any truth in that? Also, I don't think it's a good idea to raise the tank's temp. for a goldie who likes cooler water. Should I use Ric Ich again at this point? Aside from the one tiny dot, goldie is his normal self, swimming all over and begging for food ALL THE TIME He's eating well and enjoys a varied diet. Thanks guys

Now I'm wondering if it would be helpful to dose the tank with SeaChem Stress Guard at the same time. The bottle says it is safe to use with other medications as long as they don't contain copper. I have some on hand but haven't used it yet. Sorry to bug you again, but I'd love to hear your thoughts CindiL, (and you thought you were getting rid of me .)

Are you sure its ich? Do you have a pic of him?

I would not use stress guard with Rid ich plus. I need to email Seachem because I am kinda thinking that Stress Guard has malachite green in it also yet they don't mention not using it with those types of meds.
OP

Thanks again Cindi! I got the Stress Guard on a whim, but have hardly used it. I had a feeling it may have a similar ingredient from the get go because it's that same shade of blue. I tried so hard to get a good picture this afternoon but whenever I'm in front of the tank goldie zooms around begging for food. Every pic came out blurry

I'm not positive it is ich but the spots on his tail look very much like last time, and the Rid Ich seemed to work well, but I'm worried for him. He's been spot free since before Christmas but lost a few scales during that treatment. The spot on his head, near the top of his gill plate is very tiny. This morning it looked raised, like a grain of salt got stuck there. This evening it seems to have flattened and is clearer I guess? It's not as white as it was this morning. I can see no more white spots on his body.
OP

I tried again but this is the best I could get. The red circle is where the tiny spot is. The gray outlines where he is missing some scales. The scales came off several months ago when he was treated for ich. 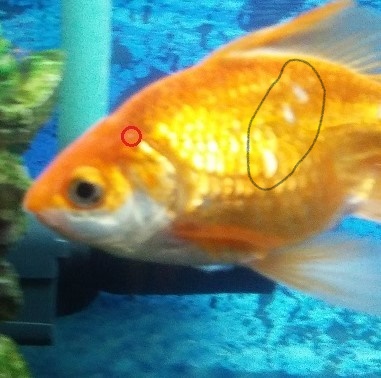 I don't think its ich at this point but will try and remember to email Seachem tomorrow morning. Seems like when I had indoor goldies (mine are all outdoors now) they would lose scales here and there, mostly though from bumping into stuff.

If anything, you could probably just use the Stress Guard by itself, it may just be a weak version of paraguard but again, not positive there.
OP

I guess I'm still not sure this is ich but it looked quite the same as last time, so I continued with Rid Ich+ because it worked before and George handled it quite well then. Tonight's dose will be the 7th, so we're a week into this now. He's also getting daily 50% WC's.

After the initial spots, more appeared and they look just like he was sprinkled with salt. This morning I thought it looked like there were less of them and was feeling pretty good until I noticed some other things.

The circled spot is where he has what looks like a two small red wounds. Also, his lateral line seems to be more noticeable than normal today. I tried to get pics but these areas don't show up well. This is the best one I got. 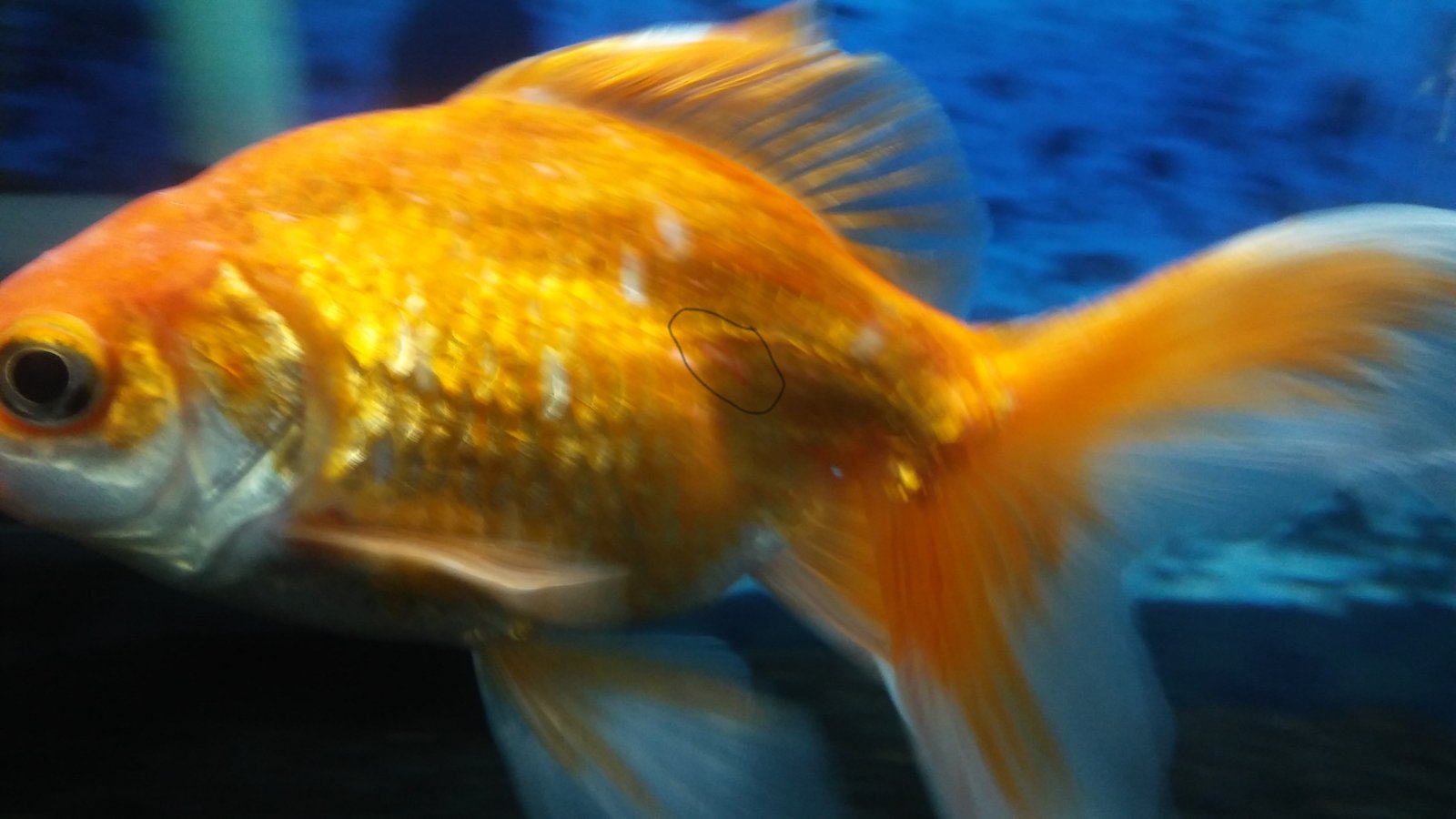 The salt spots are noticeable on George's head in the pic above.

I feel so bad that he's sick right now. I know that we need to get him out of that tank, but the kids were having a really hard time saying goodbye, so I was planning on moving him after we got the new tank stocked. I have a friend with a pond, but now the poor guy is sick. I really want to get him well so he can go have a better life than we can provide him.

What I have on hand..
Rid Ich
Stress Guard
Garlic Guard
PraziPro
non-iodized salt
I can amazon most other meds and have it in a couple of days if necessary. CindiL, can you please let me know what you think is best? I know we keep you busy and I just want to say that your support means a lot

Edit: I thought I should add that George seems fine. I would not know he was sick by the way he acts. He's lively, eating well and his normal personable self. I swear this fish is attached to me, and me to him. He really interacts quite well. I'll miss him a lot but really want him to go to the friend's goldie pond.

stella1979 said:
Thing is, during the initial illness I read that fish are unlikely to get ich again after the first time. Is there any truth in that?
Click to expand...

Thanks Dave We love our George, so that's nice to know.
OP

His red spots have multiplied, there are 5 little marks now, all in the same area that is circled in the pic above. His lat line is also red. It's been impossible to get a picture showing this because it only shows when he is turned a certain way in the light.

Maybe a bacterial or viral infection this time? I think bacterial is more likely.
OP

Anybody have ideas on meds for white spots (like salt), red spots that look almost like wounds and a reddened lateral line? Fish has been treated with Rid Ich+ (malachite green) for one week now, but things look to be getting worse. All redness (wounds & lateral line) only appeared as of this morning.

It could be Streptococcus but you really need a vet to know for sure. It really could be any number of bacteria or even a virus. See if you can find some pictures online:


The problem with treating for strep is that the antibiotic probably isn't going to be effective on other bacteria.

That white area doesn't look like ich to me and I'd probably stop that treatment, almost looks like wen growth, even fantails have a little tiny wen. Its hard to say what it is but red sores and streaks I think I am seeing near the tail, makes me think aeromonus but could be something else....
I would probably treat with a broad spectrum antibiotic like nitrofurazone found in API Furan-2 or Tetra Fungus Guard, HikarI Bifuran or Jungle Fungus Clear tabs (this one is at Walmart). They all contain the same medicine with different marketing names. I'd do at least 2-four day rounds.

I'd also suggest having on hand some Kanaplex.
OP

Thank you everybody I don't know that it is ich, but there are definitely tiny white spots all along the top of his head and body, more than are noticeable in the picture. They look just like salt, in that there is a tiny bit of transparency to them.

He does have red streaks in his tail. This occurred before the white spots. I just made sure to keep his water super clean, this guy always gets at least 2 wc's per week, lately it's been daily. I have never seen redness on his body though so I've been pretty freaked about it. Will get the meds asap. Thanks again.

Can you get a current pic of him and post it? We should know whether or not he's dealing with ich at the same time. I'd recommend salt and heat for him if he is. I just want to know what problem needs to be addressed first. Ich looks like large grains of rock salt.
OP

The pic above is from yesterday. These are from this morning. I'm really trying but most of the things I want to show are not coming out well in pics.

You can see spots on the orange part of his tail in this pic. They are very small and there are more along his body that are noticeable to the eye. The spots don't seem to carry over onto his belly, they are mostly on his head, along his body under the dorsal fin & on his tail.

In this one you can see some of the spots along the top of him, as well as on his head. Also, his "wound" spots are showing whitish/pink here. They are on either side of his lat line just where he starts to thin out on the way to the tail.

This one shows lots of spots on his tail. He also has long red streaks on the bottom of both tail fins and his tail is starting to shred now.

I wish I could show you how reddened his lat line and those 'wound' spots are. My 10 year old says it looks like blood This redness is only on one side of him. I've taken about 30 pics since yesterday but it doesn't show in any of them.

It looks like a combination of ICH and a bacterial infection that some fish get due to being compromised. You should feed Metronidazole to him, it will help with infection and kill the ICH while still on the fish. I would switch to prazI pro over Rid Ich as well, but be patient because at low temperatures the ICH life cycle is very long. You need to treat for about a month.
OP

I am not experienced in this stuff but I was thinking the same thing. The spots seemed parasitic, or maybe fungal. Then a week later when the redness showed up I thought it must be a secondary thing.
Share:
Facebook Twitter Reddit Pinterest WhatsApp Email Link