Hey everyone! So I’ve recently upgraded my 28g bowfront. I added a piece of driftwood (needed 2 rocks to hold it down until it waterlogs) and also changed my lighting to 2 65w CFL bulbs. I upgraded my bulbs because I thought the Vals needed some more light. They’ve bounced back a little bit, but they’re still pretty pathetic. But the lights look nice! LOL

Now I have 2 issues. The first is ALGAE. UGGGH. I’ve stopped dosing Flourish, which I was doing 3ml twice a week. And I haven’t placed any more osmocote tabs in a while. I can check my logs if you really want to know the last one, but I’m sure it was over a month ago. I’ve cleaned it twice already, but you can still see some remnants in the pics.

The other issue I have had is 2 bad Nitrate spikes. This one makes no sense to me. My stocking hasn’t changed. (1 betta, 6 Corys, 6 Neon Tetras, and 6 Black neon tetras). But I’ve had the Nitrates spike to 80ppm last week, did my water change and it went back down. But then this week I checked again and I’m back to around 40-80ppm. I’m not feeding any more than normal so I don’t know what’s causing the spike. All other parameters are fine. pH dropped a touch, but that’s normal with the wood. Sigh

At any rate, I’ve come to the conclusion that it’s time to ramp up my plants. I want a nice carpet plant, but I’ve read different things about dwarf sag and dwarf grass. With the sad state of my Vals, I’m worried that I’ll never get a carpet to establish. Some say they’ll grow, but they won’t explode if I’m not running CO2. I know my wife would not be happy with dropping cash on a CO2 system. So, I’m at a loss. Maybe some floaters would help bring the nitrates down? I’m open to any ideas. I have seen some folk setup CO2 systems that run off those paintball cartridges. Would that be an option for me? I might be able to finagle that if the price isn’t too high. . I've also been looking at other liquid ferts such as Thrive, but I didn't know if that would change anything with the Vals or whatever carpet plants I get. 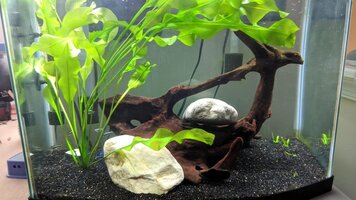 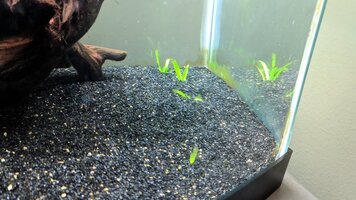 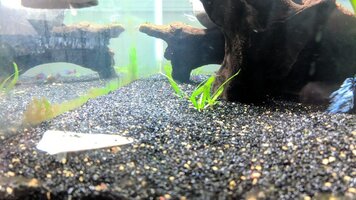 Nitrate spikes are likely from your filter processing so much ammonia and creating nitrate. Also likely from the osmocote balls. They have ammonia and nitrate in them. You'll need way more plants to consume the nitrate. The tank currently is sparsely planted.

Dwarf sag will do fine in these conditions. Your vals are likely doing poorly because of the flourish excel. It's known to melt them since it has glut in it.

I'd stop dosing excel and I'd start dosing Thrive (3 pumps once a week). Then 50% water change at the end of the week. You don't need CO2 for dwarf sag, but it never hurts. There are usually cheap CO2 setups available on craigslist.
OP
M

I didn't even think it could be the Osmocote! I placed way more Vals in there when I got them and I placed additional Osmocote. I bet from all the pulling up and substrate disturbances by the cories stirred stuff up!

I'm not using the Flourish Excel, just the plain old Flourish. But I've been dying to have an excuse to try Thrive anyways so this is it! LOL Should I go with the ThriveC? It says it's for low-tech planted tanks and helps out with algae some. Lastly, I saw that they say to do %50 water changes with Thrive. Why is it so much higher than the normally recommended 20-25%? Is that just to keep Nitrate levels down?

I'd fo easy on the thrive until you get nitrates out as it's a nitrate maker. I'd vacuum gravel try to get out the osmocote and keep doing water changes if it were me.
OP
M

I've got BDSB for my substrate... it sucks vacuuming it. Would it help if I just bought some Dwarf Sag and planted it? If not, I'm sure I can sift them out. It'll be a pain, but it can be done. LOL

mytmouse said:
I've got BDSB for my substrate... it sucks vacuuming it. Would it help if I just bought some Dwarf Sag and planted it? If not, I'm sure I can sift them out. It'll be a pain, but it can be done. LOL
Click to expand...

Dwarf sag would definitely help.
ThriveC is a good fert as long as the liquid carbon aspect is not derived from glut. I think it isn’t, but I’m not sure
OP
M

Definitely not glut based. OMG Vishaquatics (Koiman) !! I'm the guy trying to get the Dwarf Sag from you on AquaSwap! (myt_jc) AHAHAHAHAHA I just PM'ed you there a little while ago.

mytmouse said:
Definitely not glut based. OMG Vishaquatics (Koiman) !! I'm the guy trying to get the Dwarf Sag from you on AquaSwap! (myt_jc) AHAHAHAHAHA I just PM'ed you there a little while ago.
Click to expand...