Member
Lola was always small for her size. She just never grew and I've had her a couple of years. A few weeks ago, she appeared to be coming down with hole-in-the-head disease. With care, she seemed fully recovered from that. She was eating well, playing with the other BP's. Last night, I noticed that she was twirling like a ballerina. Her lips had turned black and her body looked like she'd been attacked by the other fish. I have seen fish go after one that they know is dying. I had to make the decision to euthanize her.

I will miss her horribly, as will Buster and Sonny, the other BP's. Not to mention, Apache, my featherfin cat. Lola was his best buddy and had taught him that it was a good thing to relax and swim around the tank when the lights were on. If he went into hiding, she'd go poke him until he came out into the open and joined her.

Lola is the top one in the "blood parrot ballet" photo. You can't see her face, but know that she was beautiful. 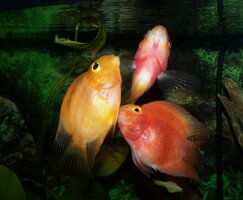 Its so hard when we become attached to our friends. What a beauty she was!

Member
I'm sorry you lost Lola, she was a beautiful fish.

Member
Very sorry to hear about Lola, Lynda. She was a good friend, and will be missed.

Member
So sorry about Lola, Lynda. She was a very beautiful fish.

Member
I'm sorry for your loss, Lynda. BPs are such sweet fish. It was strong and kind of you to ease her passing.

Member
Just saw this post. I am truly sorry about lola. I know how much we can get attached to our water babies. RIP lola.

Member
I am sorry for your loss

Member
So sorry for your loss. She was such a pretty fish.

So sorry for your loss.

I also have one that I've had for about 3 years now that simply isn't growing. He/she is doing fine to date. Previously, I've had 1 or 2 others that did not grow and their life was really cut short compared to my other Bloody Parrots.

Being a hybrid species, you just never know what is going to happen.

Member
your always helping other people with their losses. we are here to help you. so sorry