This is a little something I wrote up based on some juicy juicy data I found on Welcome to NTL-LTER | North Temperate Lakes for a uni class.
Please do not treat this paper like an actual scientific publication, I didn't do *all* of the statistics

TL;DR, sunfish are neat, they hybridize more in murky water.


Abstract:
The bluegill (Lepomis macrochirus) and pumpkinseed (Lepomis gibbosus) are two common freshwater Perciform fishes commonly known as “sunfish” found in North America. Both species are economically and ecologically important. Due to an overlap in range and habitat, the two species are known to hybridize and regularly produce hybrid offspring that have low viability or are sterile.
To better understand the conditions in which these fishes hybridize the most frequently, fish from different lakes within a region were captured and identified, then several conditions of the lakes in which they were captured were recorded.
Only turbidity was found to be significantly associated with hybrids, and more turbid lakes were more likely to have hybrids present.


Introduction:
Both the Bluegill (Lepomis macrochirus) and the pumpkinseed (Lepomis gibbosus) are Perciform fishes native to mainland North America. These species are popular fishes for recreational anglers due to their high population density and ease of capture (Beard et. al 1997). As well as an invaluable part of many freshwater food webs, especially in regard to supporting populations of piscivorous fishes (Doxtater, 1967).
Both the bluegill and pumpkinseed are native to this study region (Wisconsin, USA) and are known to be found in the same non-breeding habitats (USGS, nonindigenous aquatic species) spawn at the same temperature thresholds, and breed in mixed colonies. (Avise and Saunders,1984)
Hybridization is commonly reported between these two species, and these hybrids are mostly sterile (Etnier, 2011) or have unusual numbers of chromosomes (Dawley, 1987), although some back-crosses have been recorded. Therefore, studying the conditions that result in the hybridization of these species is important to ensure that both species remain common enough to uphold their vital status in North America’s freshwater ecosystems.
Fishes are known to hybridize more than any other vertebrate taxa. Hybridization in other Perciformes, such as African cichlids (Pseudocrenilabrinae), has been suspected to account for extraordinary evolutionary radiation present in the subfamily (Meier et.al, 2017). In other cases, such as that of many species of native salmonoids and invasive rainbow trout, hybridization in the wild and the production of sterile offspring has become a major conservation concern(Muhlfeld et.al, 2009) . In captivity, hybrid forms of fishes are often prized by aquarium hobbyists for their color, size and behavior, such as is common with livebearers (Poeciliidae)(Gordon, 1931) and cichlids (Cichlidae). Hybrid Tilapia (Pseudocrenilabrinae) are common as an aquacultured food-fish (Chapman, 2000 ) , and hybrid bass (Morone saxatilis x M. chrysops) are commonly cultured for sport fishing (Hodson, 1989).
While often observed, bluegill/pumpkinseed hybrids are poorly studied, and most of what is known about them comes from captive studies. This paper presents a novel approach to this study system by examining the natural conditions in which these hybrids form.

Methods:
Several lakes within the Northern Highland lakes district of Wisconsin and Michigan USA (part of the Mississippi and Laurentian Great Lakes drainages) were surveyed by the Center for Limnology at the University of Wisconsin-Madison. Fishes were collected via minnow traps baited with white bread, and crayfish traps baited with beef liver. Once captured, these fish were identified and released.
Other factors from the lakes were surveyed as well, including Maximum lake depth, lake perimeter, lake surface area, percent of lake shoreline composed of wetland, and Secchi depth.
Numerical values for lakes with and without hybrids were aggregated and compared via an ANOVA test.

Null hypothesis: conditions will not differ significantly between lakes that do, and do not contain hybrids.

Results:
Of the lakes sampled, Circle Lily lake, Johnson Lake, Arrowhead Lake, Bass Lake, Found Lake, Tenderfoot Lake, Morton Lake, and Oxbow lake contained hybrids.
When the numerical values for lake characteristics for lakes with and without hybrids were statistically compared, only Secchi depth was found to be significantly correlated with hybridization rate. Lakes that contained hybrids had a lower Secchi depth (higher turbidity) than lakes that lacked hybrids. 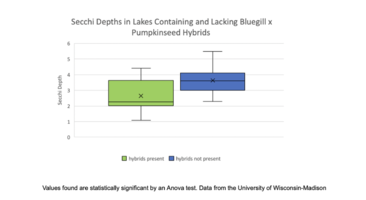 Discussion:
Both bluegill and pumpkinseed are known to engage in highly visual courtship displays before spawning. These displays include a male and female swimming back and forth between each other, after the female selects a male with a suitable nest scrape to approach. Morphological discrimination against non-conspecifics by males. (Clarke et.al, 1984). Increased turbidity may make such assessments difficult, and therefore increase the rate of “incorrect” morphological assessments by males, and increase the rate at which hybrid spawnings occur.
The long-term effects of hybridization between bluegills and pumpkinseeds are unlikely to result in effects as dramatic as those seen in radiating African cichlids or in declining salmonids. However, based on the findings of this study, changes in turbidity in other systems with other species that rely on visual selection of mates may result in detrimental or radiation-facilitating hybridization.

Very interesting. Those lakes that don't have hybrids have both parent species, right? How many different locations per lake was sampled? How many fish were trapped? Is it possible to replicate this result by controlling turbidity in a pond, with everything else being same?
If the hybrids are infertile, why do we see so many of them?

Very interesting. Those lakes that don't have hybrids have both parent species, right? How many different locations per lake was sampled? How many fish were trapped? Is it possible to replicate this result by controlling turbidity in a pond, with everything else being same?
If the hybrids are infertile, why do we see so many of them?
Click to expand...

I'm sorry this reply is about a year late, I compared 10 hybrid containing lakes, and 10 non-hybrid lakes containing the parent species. The data collections sampled a little over 4,000 individuals, although I don't know the exact details of where in the lakes they laid their traps and nets. We certainly could try and research this in captive fish in artificial ponds with controlled levels of turbidity. If only I had the funding...
Infertile hybrids aren't uncommon since all it takes to produce them is a single case of mistaken identity, and the hybrids themselves don't need to reproduce to be present.

I found my own first hybrid sunfish in a turbid lake this summer. The first photo is a stunning Pumpkinseed x Green sunfish hybrid, the second is a much more subdued Bluegill x Green sunfish.

Everything You Need To Know About Excel And Liquid Co2, Experiment Results