How to tell the Tail type of your Female betta

How to tell the Tailtype of your Female betta

I'm sure many of us have had the problem of not being able to tell the tail types of our female bettas. So heres a guide on what to look for in females to better guess what tail type they may be. When figuring out the tail of type of your female the first thing to look for is the amount of rays she has, so first I will discuss how to count rays.

Different tail types have different amounts of rays. VT's, usually have two, as do CT's (though sometimes they can have more - up to 4 or 8 sometimes). HM's can have up to 10 (and have even been know to have as many as 16+ ), but usually have 4 or 8 (though a HM with only 4 - 8 rays would most likely be classified as a delta or super delta). PK's generally have two (traditional PK's) and HMPK can again have 4-10+. When you look for rays, they always start off at the base of the fin as one big ray, then branch off about 1/4 to halfway down the main ray. It's the branching you want to count. It can be tricky to see sometimes.

Here's a pictures taken off of aquabid (with permission from the seller) to show you what I'm talking about. 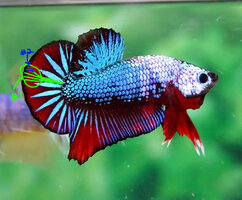 I drew in the rays to make it clearer. In example #1 you can see the clearly defined 4 rays. But in example #2 you can see where the rays spliting off and there's actually a 5th ray, bettas rays comes in two's so when this fish is finished maturing there's a good chance that he'll have 6 rays. You measure your bettas fins by the highest ray-count. So it could have a few rays with 4, and a few with two, but would still be classified as a 4-ray.


Ok, now that you have an idea on how to count rays, we'll discuss each tail type individually. Here are pictures with certain highlighted points, look at the picture then we will discuss the highlights. 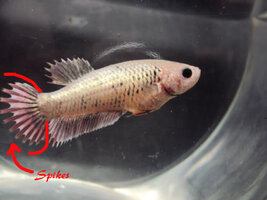 A crowntail female is obvious, she has the “spikey” fins 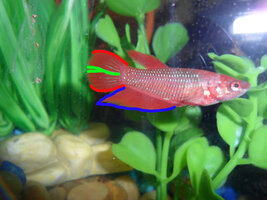 Ok, highlighted in red we see that the edges of her tail are not straight, they curve in toward each other.

In green we see that she only has 2 ray, a veil tail female will NEVER have more then 2 rays.

and In blue we see her analfin, its long and scopy but not very well defined or symmetrical. 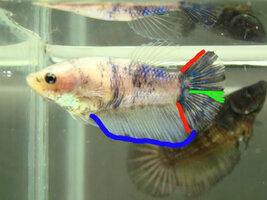 Red - The edges of her tail are straight, the DO NOT curve in toward eachother.

Green - She has 4 rays, deltas/super deltas can have between 2-6 rays. And sometimes more, they’re considered a delta/super delta if they have a tail span less than 180 degrees. 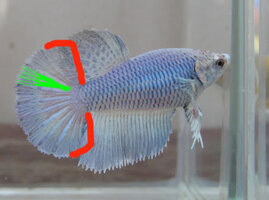 Red - Her tail had nice long straight edges, and when shes in full flare her tail make the shape of a perfect D.

Green - She had 8 rays, a halfmoon can have anywhere between 6 and 16 rays, and sometimes more! A halfmoon is considered a halfmoon when they’re tail span reaches 180 degrees. 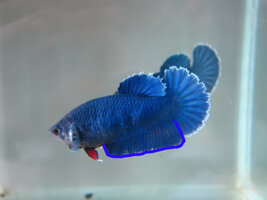 The only point I can really highlight here is her analfin, a female plakat will have a smaller, straighter, shorter analfin then any of the other females. 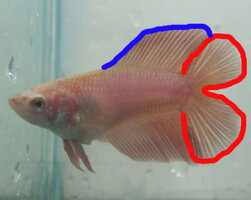 Red - She'll obviously have 2 lobes, the more even the better

Blue - Double tails have a much long dorsal fin then any of the other tail types.

Telling a female from a male plakat 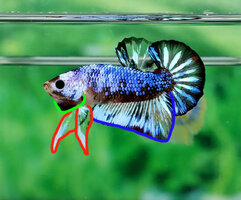 Red - Males tend to have much longer ventrals than females

Green - Males have an extra layer of skin on there gill making it possible for them to make the big flare face, lol. When females flare their girls will flare out but that BIG extra layer that frames the face won't be there.

The seller of the 2 male plakats was Bangleangbettas, and the seller of the females (besides the veiltail) was Newbettas
Last edited by JustFlareIt; January 22nd, 2011 at 06:22 PM.