How to stop betta from fin nipping!

I’ve been seeing and responding to a lot of posts regarding betta fin nipping, and confusing it as fin rot. I currently have a betta who is fin nipping and so I thought that I should make a helpful post on how to identify/differentiate, causes, and treat/prevent fin nipping in bettas.

Is it fin rot or fin nipping? Differentiating the two is really really easy. If your betta’s fins look exactly the same as it was when you got it, meaning same shape and figure, but you see a dark outline (could be black or brown) then it’s fin rot. Treating fin rot is fairly easy but that’s not what I’m here to talk about. Fin nipping on the other hand is when the tail/fin has some chunks or shred to it. The common one you’ll see when you search betta fin nipping is when the tail has a bite-like chunk out of it, like a “U” shape. The next one is I feel is less common but that’s all how my bettas started. It looks like the tail has shreds. The first time I got bettas, both of them had these shreds in their tails the next day. when I asked the forum about it, fin nipping didn’t come on topic. But it was only a few more days since i saw them nipping their tail and leaving it with shred marks. In fact, the betta that i mentioned is doing the same.

Now fin nipping is not a disease or something curable. It is a habit/behaviour that bettas have or develop under certain circumstances. These circumstances is the environment or basically, the tank you put them in. To simply put it, your betta will most likely bite their own fins if they don’t like their environment. And due to that, they get stressed and uncomfortable which makes them bite their own fins. However, that is not only the case. Since fin nipping is a Behavior, it could also be hereditary. Perhaps, the betta could have been bred from a line of bettas that also have this Behavior. Sometimes it could also be that your betta is too aggressive. If this is the case, it means that your betta could have either confused its own tail as another betta or it has no other fish to fight with, so it bites itself to release that built up aggression.

No matter what the cause of this is, there is only one solution to it, and it is to make some adjustments. But quick disclaimer, this habit of bettas is really really hard to break, but it’s not impossible. Sometimes when a betta starts fin nipping, it will feel satisfied as the aggression is released from time to time. The first thing you’d like to do is to increase your maintenance for 2 reasons. First, your tank may have wrong parameters and this makes your betta uncomfortable. Second, since fin bitting opens wound tissues, if your tank is dirty, these wounds would then get infected and lead to fin rot. While you could do this, the chances of stopping the behaviour is low. Second, just like most answers you’d find, add more plants. When i say more plants, I mean MORE. You want your tank to be heavily planted when doing this solution. This is what worked for most of my bettas who were fin nipping and it is what is working for this new one. I will attach a photo of how heavily planted your tank should be. Bettas use plants as places to hide and feel secure, so leafy plants are the best for this. I recommend anubias, amazon swords, java ferns, and cryptocrynes. You also want to add a variety of sizes, some tall some short. The next solution is the opposite and it is to remove all decorations. When bettas are bred, they are transfered to a jar at a certain age, especially males. To have more space, these jars wouldn’t contain a lot of plants. The bettas are kept in these jars for quite a while, so what I THINK is that they got used to having no plants or decors in their homes. Now, I’m not just making these stuff up. I have also kept a lot of bettas who stopped fin nipping with this method. The most plants I put are dwarf hairgrass. After trying all these 3 methods, the last thing I would suggest is to add indian almond leaves. This is known to get your parameters perfect for bettas, and even lessen their stress.

Hopefully a lot of betta fish keepers would find this post helpful. Most of the time, people would buy bettas because of their extremely gorgeous tails and it would be so frustrating if they just bite this completely and making it look messy. 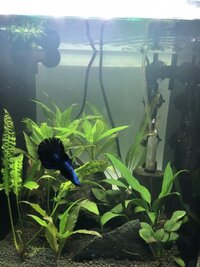 I would like to add that after adding more plants to his tank, there was an immediate change of response. This is a divided set up and the dividers are quite thin that the fish could see each other sometimes through the surface of the glass. Before, he used to be all up in the fish next door to him and would just stay in that position and would flare a lot which is bad. But after putting more plants, he would explore the tank more and be more mellow. He still flares at the fish beside him but it lessened drastically.
Upvote 0

Thanks! Dealing with this very issue right now, in fact. I had suspected for awhile i had a fin nipper, but he will stop for long periods of time. Usually seems to be triggered by flaring at his reflection. Added some more plants yesterday, plan on adding more today or this weekend.
Upvote 0

Help with betta from fin nipping!

Simple way to prevent cross contamination in your tanks