How to coax my German Blue Rams to 'get back together'?

I bought two German Blue Rams, a male and a female, from PetSmart over 2 weeks ago. In the crowded store tank with both EBRs and Bolivians, I immediately noticed two rams guarding a corner. After observing the fish for a few minutes, I deduced that the fish were a bonded pair, most likely created in the holding tank. At that moment I knew that I had to buy this pair; after all, GBRs are by far my favorite fish, and I didn't want some dummy coming along and sticking the beautiful fish in some garbage tank (Seriously, another customer next to me who was viewing the fish told an employee that he was going to put African cichlids with goldfish :confused. It was an easy decision to make.

For the first week or so, the rams were virtually inseparable. They ate together, they explored together, and they lovingly brushed up against one another. I was happy as can be.

Fast forward another week, and the dynamic between the rams changed almost completely. The male claimed the left side of my tank, and whenever he saw the female, he would chase her all the way to the right side of the tank. He wouldn't nip her or cause damage, but clearly he didn't want her near him. My poor female ram didn't understand; why was her man being so cruel to her? She never fought back and continued to try to swim next to him, but he wouldn't have any of it. I was distraught and worried about the safety of my female ram.

I was about to give up hope on my male ram until a few days ago, when I noticed that he performed some sort of mating display to the female. He colored up a lot more and fully extended his fins. The female also colored up. It lasted only 5 minutes, and then he went back to chasing her away. Here's a video of the encounter:

In addition, yesterday I noticed the male doing the same display, and in the morning, when I turned on the aquarium lights, I saw the male and female sleeping next to each other. My question is, Is there still hope? Can my GBRs rekindle their lost love? Is there anything I can do it inspire them to bond again, possibly spawn?

Although thus far no one has responded to this thread, it doesn't matter anymore. I'm proud to say that not only have my German Blue Rams re-bonded, but also that they have just spawned!!!

I doubt that the eggs will hatch because of my high pH (7.6), and even if they do that the fry will survive, but I don't care.

Here are the pics: 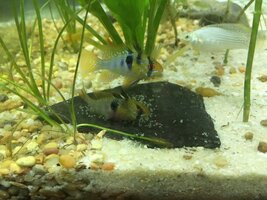 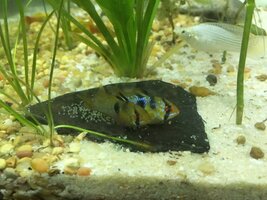 I love happy endings, I wanted to have a pair of gbr too, sadly I still don't have the proper aquarium size.

They are wonderful fish! What size tank do you have?

I have a 14g nano aquarium (8 cardinals and 5 pepper cory) and a 25g one housing 4 comet goldfish which I assure you will be rehoused soon (was bought by my parents without prior knowledge of fish in aquarium).