How to clean moss wall? (I don't have one yet)

Member
How to you clean a moss wall? Do you use the substrate vacuum, or would it clog up with the bits of moss? Do you violently shake the dirt out, then do a water change?

I want to know how to take care of it before I make a moss wall. Although my moss 'wall' will be a single piece of plastic canvas, which I would simply tie the moss onto. I might do it with Java Moss, but I'm also curious if it would work for Christmas moss too.

Member
I wonder if blasting it with a turkey baster before a water change would work?

Member
If its on the wall, all you may need are some Amano shrimp to keep it clean.

Member
How would a wall be any different from a clump of moss growing in a tank. ?Would it not be exactly the same ?

Flyfisha said:
How would a wall be any different from a clump of moss growing in a tank. ?Would it not be exactly the same ?
Click to expand...

I don't know, I've never kept moss before, so I've never kept a clump of moss growing in the tank either. My main concerns are the lighting (or lack thereof), and how to maintain it, if necessary. I only have guppies, marimo balls, and a little green algae on the back glass.

I do want to avoid the moss collecting on the internal filter's intake sponge, so I want to tie down the Java Moss for that reason.

Member
I have found its possible to do a reasonable job of cleaning floating detritus ( stuff) out of moss by waving at it with my fingers an inch or two away. Doing this on water change day . I have not grown a wall . At times I have had some large clumps.

I suggest you buy some moss and start growing as much as possible. Learning how it grow ( or not) . The impression I get is one it does not like turning over and over floating around from place to place and two it decides where in a tank it likes to be and grows there.

An old timer , an elderly gentleman from my local club once said to me errr get that stuff in your tank and you can never get rid of it.
While it’s not much of of problem another saying is Duckweed , algae and moss are with you for life. 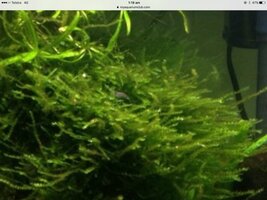 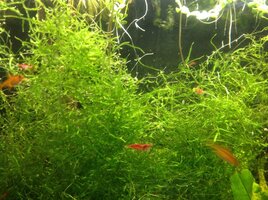