I'm making this thread to keep track and to remember from the start why, how and when- my angelfish paired, their actions-their requirements, my successful tries and failiur and all that is related to it because I am going to try and breed them.

The "start" first of all, will be a bit vague as it's quite a while since it all did start. I can't remember all the details but here goes...

The first I ever noticed that my angelfish were pairing was when my 2 angelfish Fire-Head (who I will be calling F-H for short) and another angel Survivor (who has passed away) picking on the horwort. At first I thought it was nothing but then F-H started staying in the back-left section of the tank a lot and Survivor being with him 80% of the time. F-H also was becoming very aggressive towards the other angels that came within that part of the tank and used to chase them out with force. At first it was just F-H that was chasing a bit now and then but then they both started getting aggressive towards the other angels. That's when I considered getting a separate to breed them in. Sadly, Survivor passed way suddenly about a 2 months ago.
So this was all a few months ago.


However I am still hoping to breed them.....

About, lets say +- a month ago, I just happened to glance at my tank and witnessed something..errr... odd.
On 2 separate occasions F-H was "hanging" in the midwaters of the tank while Silver and/or Blotch were... like pecking at his mouth. He made no move toward them, at least, the 2 times I witnessed it, he didn't. To be honest, the first time I broke it up because I thought something was really wrong with him. I tapped on the glass and he came "right" straight away and was fine. The second time I didn't do anything but as far as I remember it ended much the same as the first.
Let me explain in more detail. By "hanging" I mean his tail was facing the tank bottom while his mouth was facing the surface and he floated ever so slightly. Could this be some smaller version of "mouth locking? Anyway nothing came out of it and I didn't see them do it again.

F-H is now slightly more than 5in and the other 2 angels that have showed interest in him, Blotch- 3-1/2in and Silver- 4in.

atmmachine816
Could be a mating thing like you said. Putting the three in a tank would work I would think, just keep an eye on them so one doesn't get beat up a lot. Should be interesting to see what happens.
Sabi
Ya it will. I personally hope F-H and Silver will pair up!

Anyway got the tank today its a 24gal corner pentagon. Had it setup earlier so if it cycles quickly as usual I should put them in within 2 weeks. I had the filter running in my 67gal , so hopefully it will help cycle faster.
08/11/07
Sabi
So far... 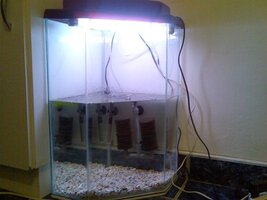 Yesterday I noticed that Silver and Blotch had bruises behind their eyes. Hmmm. That means F-H was really giving it to them extra hard.
Generally, they would get as close to him as possible before he chases them away. Soon as he stopped chasing the they'd stop and turn back again wearily. Wheres the the whole thing is repeated (every so often)...

Sabi
Silver is the only one with noticeable bruises.
F-H, Silver and Blacky are having it out. They stay in a triangle and attack each other. F-H aways winning in the end. Blacky btw is 3in. I'm going to just leave them and see who pairs off . Only hope I don't end up with a dead angelfish!
21/11/07
Sabi
Ok its like this so far...
F-H vs Blackie' F-H vs Silver; Silver vs Blackie.
F-H and Silver chase Blotch but he/she never 'stands' up to them but swims away. So i', still watching and waiting...
22/11/07
Sabi
Lol, well it's still pretty much the same! At first I used to watch attentively whenever they were at it now I couldn't care less. Funny thing is Blotch seems to b the ne out of everything, never fighting or having a go at the other but simply getting out of the way if chased. But on occasion I saw F-H and her? together without aggression but then he chases after a while. I'm worried hoping they don't pair up as i'm beginning to think she?'s stunted. She hasnt really grown since I bought her 4/5 moths ago...
29/12/07
Sabi
Silver is hiding in a cave every now and then. When ever she comes across Blackie or F-H she sorts of stands on her tail and sometimes sidles away towards the cave.
She and blakie have lip locked, as well as F-H and Blakie though theirs were shorter.
I noticed Silvers fins are slightly ripped. I'll have to keep close tabs on her and if the aggression gets really bad I 'll take her out.
What do you think, any ideas?
9/01/07
Coryd55
What does a bruise on an angel look like?
Sabi

I think its going to depend what color the angel is. As Silver is light it shows as darkish blotches on her.
Sabi
I took Blackie out and put him/her with Blotch in the 24gal. He chased her a lot but no damage done.

In The 67gal, F-H and Silver seemed to get on better without blackie for a while, just the occasional chase by F-H. But after a while F-H started whacking Silver badly. She got bruises and a bit ripped up. I hasted to take Blackie and Blotch to my lfs where I sadly swapped them for live plants. Then I ook Silver out of the 67gal and now she's in the 24gal. F-H seemed pretty lonely the past few days and I think he may even be angry with me! He stays at the back of the tank watching me out of mournful eyes! And if I come while he's swimming in the front of the tank he goes to the back. Huh, what did I do wrong?! It's he's own fault! Anyway, now i'm going to try and get hold of a biggish male veiltail somehow or the other.
28/01/08
capekate
HI Sabi,
sorry to hear you had to return the angel.. but you did the right thing, if the other was getting ripped up. :-\

HI Sabi,
sorry to hear you had to return the angel.. but you did the right thing, if the other was getting ripped up. :-\

Getting ripped by 2! Now I have 1 in the main tank and 1 in the 24gal. And I'll bet I ended up with 2 females!!!
atmmachine816
I'm sorry about that, you can always try again if you can get similar size angels, as long as the store doesn't care about returning ripped up angels.
Sabi
My lfs (the store I frequent the most) is the only one that takes fish back from me and they very rarely have biggish angels.