How I Grew Anacharis In 80f

wolfdog01
So after a long battle trying to deal with Java fern's slow growth, I decided to trash them and get a new plant, one that I would have to trim once a week. I had posted about my idea for Anacharis and I got many people suggesting other plants. One thing I did read was that this plant may not do well in higher temperatures. Either way I wanted to try it. I got my first batch around late April, it came from Petco in a plant and snail tank that was kept around 74F. I tossed the plants in after a salt dip for snails but within a week and a half they all melted. I was frustrated but I had been to one aquatic store, Aquatropics, in Gainsville during that time. They had Anacharis and their entire store was heated to 80F, they didn't have tank heaters. So I got three bushels for what it would have cost for a small Java fern. I am posting this because I have heard many people say they cannot grow it in warmer waters, I want to share how I did it and hopefully help people. 1.5-2ml of Flourish twice a week. Light is a Finnex Stingray LED Razor thin. 20 gallon long with a betta and two nerites. Temp is about 80-81F.
I got those plants on May 14th, and this is how I took care of them. Sorry if the post seems a little basic and simple, I didn't write down anything I did, it's all from memory.

5-14-18: Salt dipped for snails and floated the plants. Every morning I got up and ran my fingers through the leaves and rubbed every stem to get off dead leaves.
5-21-18: Continued rubbing plants and started to pinch off dead stems. Started getting roots.
5-22-18: Planted the stems very loosely in the gravel using polymer clay holders. Got rid of a lot of dead stems, kept the best looking ones.
5-28-18: Pinched off very little stems, the plants were mostly left alone.
6-2-18: Began a DIY CO2, made a light holder. Pinched off all of the new growth, trashed all of the dead/dying parts and used the polymer clay holders to put the new growth in.
6-3-18: Changed my mind, planted them directly into the gravel probably half an inch deep, mainly just to get the roots in. Stopped gravel vacuuming during water changes.
6-9-18: Plants suddenly shot off, pretty thin, I think I will cut back on dosing ferts to once a week.
6-17-18: Not a ton of new height, mainly focused on new shoots, cut and planted some small pieces. Going to continue dosing twice a week, added a Fluval ceramic diffuser for my DIY CO2 and a filter media bag to the output of my filter to baffle surface agitation.
6-22-18: Made my first huge cuts, planted ones that had roots, floated the big one.
6-26-18: Bigger cuts were made and more plants were put into the gravel. These floaters will be the last ones I plant, running out of room. 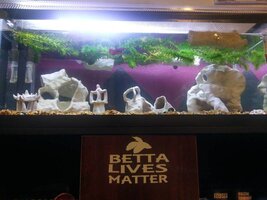 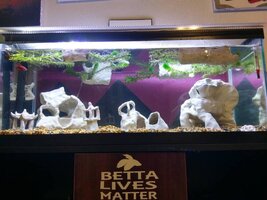 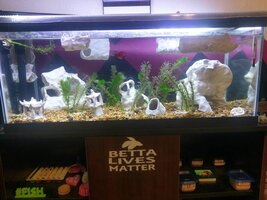 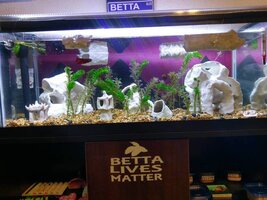 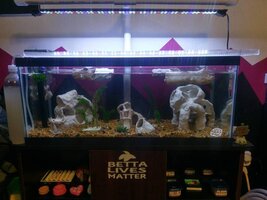 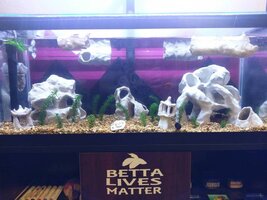 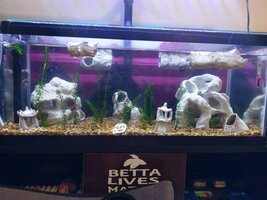 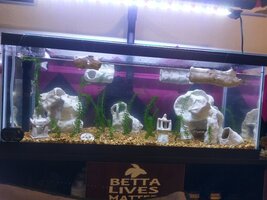 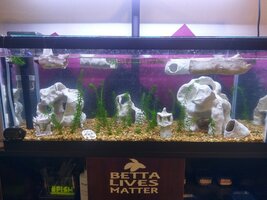 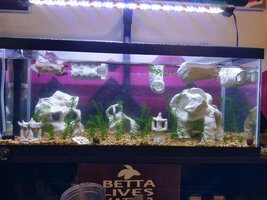 Dave125g
I love this. I have these in all 3 of my tanks. 2 of which get injected CO2 and are under 78 degrees. The third tank is low tech and 80 degrees. This is the tank there doing best in.
KinsKicks
Aweosme!

It’s quite the hardy plant XD. A friend of mine has some growing in 84F water; when we intially got it, it died back so much that we almost counted it as a loss! Now it’s growijf and we don’t know what to do with it haha
wolfdog01
Oh awesome! So glad to find more people growing this in warmer waters! When I initially did research it seemed like it was hard to grow it in anything above 80F. I love this plant and I'm hoping to start replanting the new growth pretty soon.
SixThreeOh
Mine grows in 82F. Had a piece that was 4ft long.
EbiAqua
Used to grow this in a high tech 46 bowfront kept at 80F. Injected CO2, daily fertilizers, Finnex Ray2... I could watch it pearl and grow in real time and was getting up to 6 inches of growth per day.

1.) With the HOB filter, does the gas diffuse too quickly for the CO2 to really get a chance to dissolve? I was planning on going back to PetSmart to get a media bag to lay over the output to help stop the bubbles and surface agitation the filter created.
2.) The plants look like they have slowed down and are now focusing on shooting out new plants from the stems, does this mean anything? Should I start dosing ferts everyday instead of cutting back? Or does it mean they like the water so much they want to take it over?
Dave125g

I need some opinions.

1.) With the HOB filter, does the gas diffuse too quickly for the CO2 to really get a chance to dissolve? I was planning on going back to PetSmart to get a media bag to lay over the output to help stop the bubbles and surface agitation the filter created.
2.) The plants look like they have slowed down and are now focusing on shooting out new plants from the stems, does this mean anything? Should I start dosing ferts everyday instead of cutting back? Or does it mean they like the water so much they want to take it over?
Click to expand...

You could bring your water level up to cut down on the surface agitation. Plants do stop growing to work on runners. It's a good sign.
wolfdog01
I would raise the water level but I'm nervous about my betta thinking he can jump out. I have about a two inch gap on one side of my tank for the heater, filter, and CO2 so I keep the water level a little lower because he's crazy lol.
But would reducing the surface agitation make a big difference? I've read on older forums that the exchange isn't going to be big on a DIY system with a HOB.
wolfdog01
Original post has been updated! I think my little upgrades will be worth it. Also got a digital thermometer and put the tip right by the filter output. Been reading 80.2-80.4 all day.
wolfdog01
(Picture limit reached on first post)
6-28-18: Hydra outbreak this week. Deep cleaned tank yesterday with hot/boiling tap water, cleaned plants, decor, equipment, gravel, and tank. Changed plants around.
(Hydra thread: Boiling Hydra )
7-2-18: No signs of Hydra so far, plants seem to have recovered. Slight transparency in some leaves. Broke apart the large floating plant into two smaller pieces.
7-11-18: Found one Hydra on the 6th, disposed if it and haven' seen anymore. Starting to dose Flourish 3x per week, Mon/Wed/Fri. Water changes will be less often to see if plants will grow better, may eventually do water changes once a month.
7-21-18: Decided to cut all of the dark pieces, I think they were going to melt anyways. This gave me a lot of new sprouts to plant as well. Also got another snail. 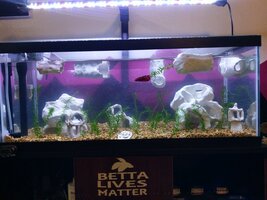 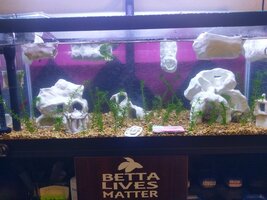 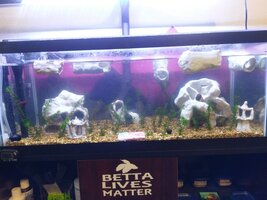 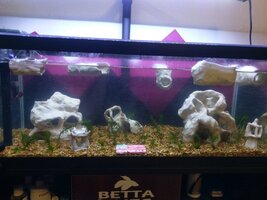 Pescado_Verde
What in the world are those decorations you have in there? They give me the screaming fantods but they're so interesting. Are they homemade?
wolfdog01
Yep, all handmade. Here is an old thread I made about. Obviously things have changed a bit.
Polymer Clay
Pescado_Verde
I've never heard of it until now but a google search tells me it's been around for a while. How big are the decorations (height in inches)? The product isn't exactly inexpensive and I'm sure it's pretty dense so I'm wondering how far a pound would go.
wolfdog01
Well the two huge decorations I think I used the 3lbs package each. For the smaller ones I would buy the 1-1.75lbs and split it amongst the logs and such if I had leftovers.
I used to sculpt a lot so I already had quite a bit on hand in the beginning.
My tank is 12in tall and the biggest ones could barely fit in my small counter oven lol. So they are probably....eight inches? Maybe? I'm not sure how wide they are, probably about the same. They are pretty much sitting on the glass so that's why they look a little shorter.
wolfdog01
Updated the second main post!
Dch48
Egeria densa, also known as Elodea Densa, or Anacharis, will grow in a wide range of water conditions. The plant is banned here in New York because of that. It is banned in many other places too. It grows very fast and chokes out other growth. I think it will also grow in Florida where the water is much warmer.
wolfdog01
Yeah I saw a bunch while I was out in the Jeep the other day. I've always heard that it was harder to grow in temps above 78. Probably gonna keep documenting this until I get the jungle I want lol
Yeah here it is, the HUGE mass of floating Anacharis, it was super cool. Wanted to grab a few armfuls and take it home lol 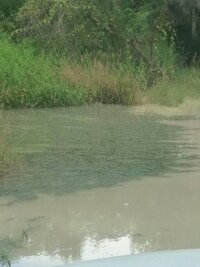 Pescado_Verde
Mine did not survive. The stems floated around for several days but I don't see any now, I'm assuming they've all sunk to the bottom and dissolved.
wolfdog01
The ones I got from Petco did pretty much the same thing. They were in a tank that was 74F, melted real bad within a week and tossed them all soon after. I'd say find a fish store that's warm enough like your tank or some that were grown in warmer water. I think that's the only reason why mine are surviving.
Pescado_Verde
Yeah, these were from PetShart. The actual LFS here in town, the store is pretty dang warm inside and I'm guessing their tanks are too. They didn't have any plants when I went there right before the 4th and because of the holiday weren't going to have a shipment this past weekend. I might look there this weekend.
Pescado_Verde
Well, there may still be hope for my poor plants. I was messing around in the tank last night and I found a few of the stems still floating, they were hiding behind the filter uptake tube. They're still green (kinda) so I'll let them keep doing whatever it is that they've been doing. Maybe they'll decide they like it here.
wolfdog01
Got some bad news today. I trashed my Anacharis.
After the whole Hydra incident they never grew back the same. In fact they were slowly dying. I think I only had five stems that were still bright green and strong, the rest were dark and either melting or close to it.
I am still happy with them while I had them and I am still happy that I was able to grow them in my tank while I could. I have replaced them with some Water Sprite and I hope they will do just as well.

This was really fun and interesting while it lasted and I think it's still a good thread to read for those having issues with Anacharis in warmer water. Thank you everyone who watched the thread and joined in on it!
hoangjohnnguyen
I'm just gonna standby and watch the progress of this lol
Dch48
I have a few stems of the narrow leaf variety in my Betta tank. I use no ferts, no CO2, and they are growing slowly. The new leaves and stems are smaller and narrower but that's fine in a smaller tank. They are weighted down because I don't want anything floating. The tank temperature is currently 82.