How do I know when my angelfish is being TOO aggressive?

This is my first post on this website, and I am excited to learn as much as I can from the site. I currently have 4 fish tanks (2 freshwater, 1 saltwater, & 1 brackish), and I also have an outdoor goldfish pond. I will let you know now that I did as much research as I could before deciding to create my own forum topic, and I am hoping that I didn't overlook an obvious answer.

Anyway, I had two angelfish in my 55 gallon tank that were getting along swimmingly (excuse the pun). They are both still doing well together, but I ended up shaking things up by adding a third angelfish. I know that it isn't really recommended to add them one at a time because of territorial aggression that is caused by the existing angels, but I figured that I would give it a shot and take him back to the aquarium shop if push came to shove. My two existing angels left my new addition (a Dalmatian-patterned angel named Pongo) alone for the most part, and he started to shyly school along with the other two. I thought that things were going to be okay, but, after a while, Pongo started to attack the existing angelfish! He left my short finned black angelfish alone for the most part, but he really liked to bother my beautiful black zebra angelfish, who has particularly long fins. He leaves her (gender unknown, I just call her a her) alone most of the time (while schooling), but he will sometimes come up to her and get so close that it makes her turn to where her mouth is facing upwards and her tail is facing down. He also nips her fins occasionally; I noticed one small nip from when I first added him, but it healed quickly. Tonight, I discovered 3 more tears in her fins, and I am getting concerned that he is really hurting her.

I really like this new angelfish, as I don't usually see them with this coloration, but I do not want to let him continue to harass my existing fish. Does anyone know if there is a way to stop this behavior (or if I should just chill out because it is normal behavior)? I watched many YouTube videos that showed different types of angelfish behavior, but none of the fish in the videos seemed to have torn fins. When should I put an end to this, if at all? Will the behavior eventually go away if I am patient? Thank you!

(Also, if any of you were wondering, I am a water change fanatic, and I make sure to keep my nitrate levels very low in my tanks. I almost never see them go over 10 ppm in my freshwater tanks due to my addition of golden pothos and my weekly water changes.)

Member
I have had a mated pair and another angel, and just 2 non-pair angels together. And my advice is, if you are seeing torn fins, and they don't heal faster than you see new tears, it's fine. So, the tears aren't growing more and more numerous. What you can do then is either return the angel causing the stress, or get a 4th to dilute the aggression. With 4, I always had fighting, but never torn fins. And this is in my 55g.

Member
Also, here is a picture of the angelfish that is getting beat up. I circled the spots on her fins that are torn (sorry for the bad pic, fish are hard to take pictures of if they are shy ) 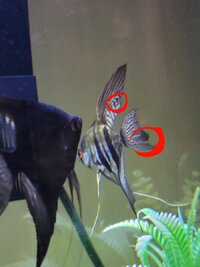 ... and this is the culprit (not the black phantom tetra). 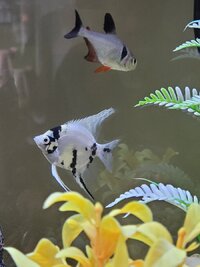 SouthAmericanCichlids said:
I have had a mated pair and another angel, and just 2 non-pair angels together. And my advice is, if you are seeing torn fins, and they don't heal faster than you see new tears, it's fine. So, the tears aren't growing more and more numerous. What you can do then is either return the angel causing the stress, or get a 4th to dilute the aggression. With 4, I always had fighting, but never torn fins. And this is in my 55g.
Click to expand...

Wow, thanks for the fast response! Just to make sure that I understand what you are saying, though, as long as the rips are healing and are not very frequent they should be fine? My other two angels are not aggressive at all, though, and I agree that a fourth one might be a good idea. If I got another semi-aggressive one, perhaps the new one will become preoccupied by a new opponent that will actually fight back...
You must log in or register to reply here.
Share:
Facebook Twitter Reddit Pinterest WhatsApp Email Link