How did I miss this forum?!

ANYWAY...I am the VERY proud momma of an 8-year-old arab/saddlebred cross gelding (3/4 arab and 1/4 saddlebred) named Dakota. Dakota is 14.2hh, bright bay, with a crooked blaze and two hind socks. His story is kind of sad and every time I think of it, I want to kick his old owners. He didn't come from a neglectful situation, by any means (if anything, the people let him get away with everything and spoiled him rotten), but what they did in ignorance could be considered as bordering on abuse.

Dakota was started under saddle at 2.5 as a hunter/jumper and by age 3 was started on 24" jumps (meaning they didn't work up to that, they put him straight over 24" jumps to begin with). This caused problems with his hocks, so his owners decided to change him into a western pleasure horse (good luck with that one...his action isn't right for western pleasure and besides, this kid LOVES to jump!). From that point on, they rode him in too small of a saddle (he has the broad shoulders of an arab, but the high, narrow withers of a saddlebred, so he's a PAIN to fit a saddle to...believe me...we're going through it right now). Being a typical "arab" personality, he let his owners know that he did not like being ridden in too small of a saddle by becoming belligerent and difficult to handle. This led to his owners riding him in a wire-wrapped bit with a stud chain and spurs. Because he did not like this either, he became even MORE difficult to handle. That wasn't that half of what those people did to Dakota, either. On the ground, if he even ACTED like he was going to spook, they would immediately give him a treat (Star Mints, his favorite) and put him away. When they were riding, if he acted like he was going to buck, they put him away. Because he is VERY intelligent, he figured out that being dumb/a jerk equaled "I don't have to work!" He used this to his FULL advantage. If he refused to do something (mainly because he was lazy and didn't want to), they didn't make him. Also, because they started him over higher jumps straight away too young, he has arthritic changes in his hocks as an 8-year-old.

Anyway, because they couldn't handle him anymore (after almost FIVE YEARS they finally realize this!), they sent him to my boss to re-train. This was in May of last year. In June of last year, I started working for my boss and automatically fell in love with Dakota. We started him from scratch, working from the ground up. I'm not going to say his ground manners are impeccable, but they're a far cry better than they were (his biggest fault is that when he gets excited, he does what I call his "stupid saddlebred trot in place thing," which some people who don't know how to handle him find really intimidating for some reason). He will now stand patiently while tied, LOVES bathtime (he HATED baths before), will let you spray his face if you tell him "Face" (before you had to use a damp rag to clean sweat off his face), and will back up on command (without pressure on the lead rope). He is ridden in a western saddle (with a wide arab tree and made for horses with high withers) and a French-link snaffle, and we have no problems with him aside from occasional laziness. I can even ride him, and I'm what would be considered an advanced beginner. We're working on our free-lunging in the large arena, but his manners on the lunge line are beautiful and lunging him in a bull pen or round pen is a dream (wasn't that way to begin with). He absolutely ADORES little kids (we used him as a lesson horse to build one of my boss's student's confidence because she'd been thrown from a horse before and he was SO patient and gentle with her!) and, oddly enough, loves dogs (he endures my insane 3-year-old aussie/st bernard mix).

Dakota was actually given to me recently by my boss. She needed him off her food bill, and he and I have developed a special bond. He recognizes my truck when I pull up to the barn and whinnies in welcome. He will come to me to be caught when turned out, but won't for anyone else (this and the fact that he doesn't get along with other horses means he gets turned out into smaller pens more often than not ). I can get him to do things for me that no one else can (the whole bathing thing, for example). So, for $80 a month (the cost of his feed...for the work I do around the barn, lunging other horses and such, my boss covers his stall fee), I have myself a VERY special boy!

So, without further ado, here are some pics of my baby: 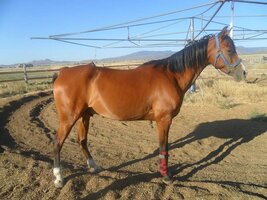 "Hi, Mom!!" (right after I snapped this, he tried to snatch the wrist strap on the camera away from me...little booger!) 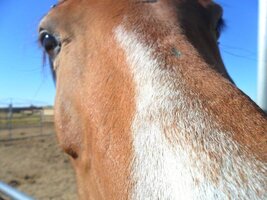 Dakota and my son: 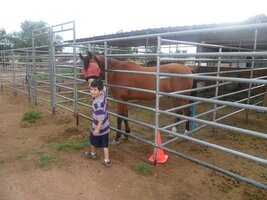 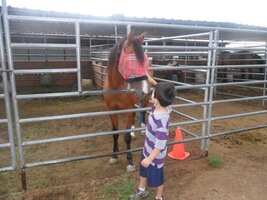 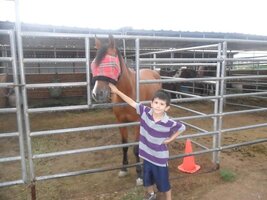 Dakota with my cousin's younger daughter sitting up on him: 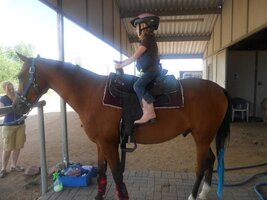 "Just so you know, I do not approve of your choice of saddles!" (This was a saddle I was looking to buy, so I tried it on him in hopes that it would fit him...it pinched him on the shoulders and he was NOT happy about it...other than my cousin's kids sitting on him, he WAS NOT ridden in this saddle...I lunged him in it so see the wear pattern and could tell as soon as I started lunging him that the saddle didn't fit right) 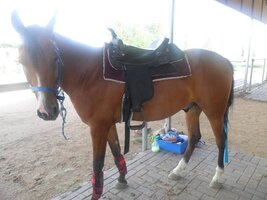 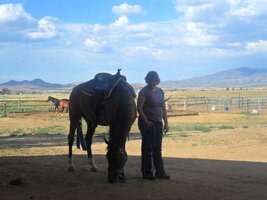 Beautiful horse! I'm glad you found this section of the forum!

Aww I love him!Sad story with a happy ending.

Welcome to the place to show off our other addiction! Glad your horse is being treated properly now.