Hello! I just got my mom a couple of dwarf honey gouramis to surprise her for her new tank, one of them is healthy and doing great but the other one had a white lump (about 1mm wide) before I went to bed, I woke up and it spread to over half his tail on one side and he can't seem to move it much anymore.

He came from the same tank as the 3 other gouramis with the same filtration system, is this a fungus, DGIV, or something treatable? 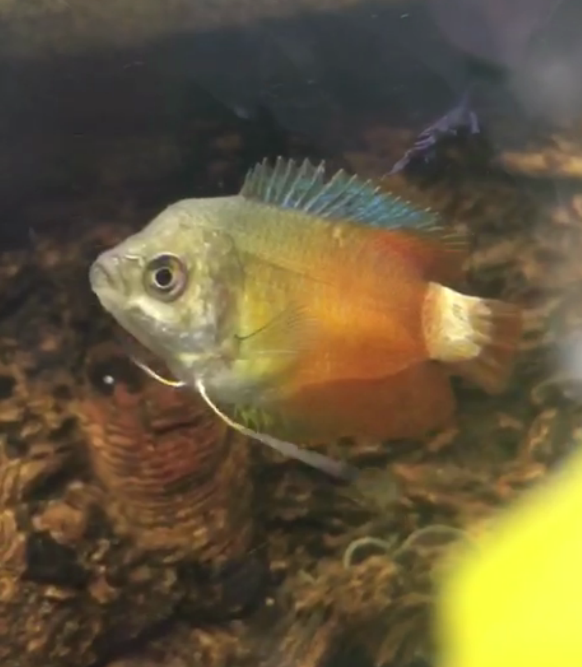 Firstly, this is not a honey gourami. It's a flame variety of a Dwarf Gourami.

How long has he had this problem?
Any strange behaviors?

It really looks like a growth, not DGIV. That disease is incurable in most situations and doesn't have any symptoms for a while after getting the fish.
OP

Fanatic said:
Firstly, this is not a honey gourami. It's a flame variety of a Dwarf Gourami.

How long has he had this problem?
Any strange behaviors?

It really looks like a growth, not DGIV. That disease is incurable in most situations and doesn't have any symptoms for a while after getting the fish.
Click to expand...

I must've remembered his name wrong, he just got this problem within the past 3 days. He doesn't act strange, no rubbing against anything, trying to hide, he's still eating, acts just like the others but he can't move his fin. I took one of my cycled sponge filters and a heater, I'm setting up a 10 gallon hospital tank for the little guy.

Edit: I just got him, he's very skinny and I'm trying to beef him up like my other gouramis too. Could that be related?

He doesn't look skinny in the photo, looks like he's got a decently sized tummy.

Sorry to say but to me we're watching a dieing / poor Dwarf Gourami. Probably DGD.
OP

DoubleDutch said:
Sorry to say but to me we're watching a dieing / poor Dwarf Gourami. Probably DGD.
Click to expand...

I hope it isn't contagious, I'm warming up the 10 gallon and getting ready to move him over. I have 3 other healthy gouramis in the tank with him, just started happenening. Here's a pic of his tail 1-2 nights ago. 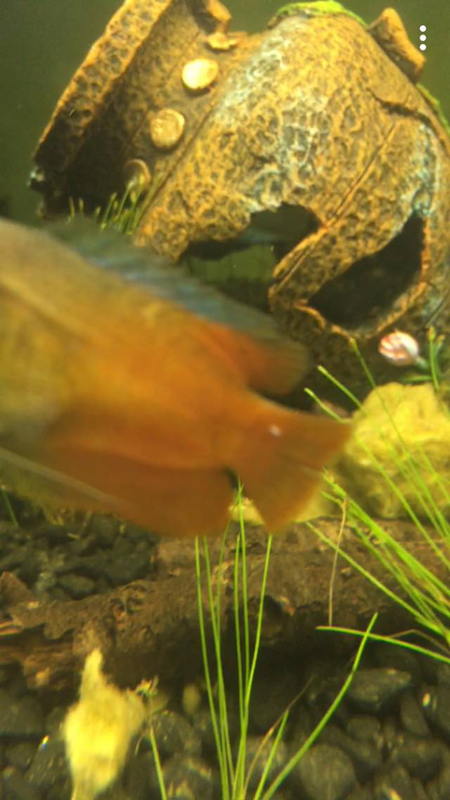 I took him out and put him in a hospital tank with a catappa leaf, after some time I netted him and scraped off that white fungus from his tail. Most of it is off and he's moving his tail a lot more now, I'll keep an eye on him and the other gouramis he was with.

I did notice one 1 dot on my other gourami's side but I don't think that was related, it looked a bit like debris but I took him out and scraped it off and the area around it too.
OP

Update: That original gouramI unfortunately died a night aftter this post, that fungus is columnaris and it seems to kill fish in just a few days after being seen. It spread to 2 of my other gouramis, one is the same type of gouramI (flame gourami) and the other is a neon gourami, I noticed the dot on the side of my Neon GouramI right above his bottom fins, I took him out with my net and scraped it off his side. I did a large water change and put in stress coat+ to try to boost their chance of fighting off something like that, I think he may have been stressed due to the new fish added.

My neon gouramI has stayed in my main 40 breeder and I've been checking on him multiple times throughout the past days and he hasn't gotten any new spots, same with my other fish. However, that flame gouramI got 2 fuzzy fungus spots next to each side of his mouth which is that same columnaris. I went out and got API Fungus Cure which looks like it should help, I put the catappa leaf in the 10 gallon (I had a few from a co-worker) and put in the API Fungus Cure in my 10 gallon hospital tank and dropped him in. I haven't seen the fungus spread in the past 2 days (by this time the last gouramI had died) and infact I don't see it anymore. I'm still doing the full 4-7 day treatmenet just to be sure.

A neon is the same species (T.lalius)
They probably have Dwarf GouramI Iridovirus that opens the immunesystem making them vunerable for all kind of infections.
OP

DoubleDutch said:
A neon is the same species (T.lalius)
They probably have Dwarf GouramI Iridovirus that opens the immunesystem making them vunerable for all kind of infections.
Click to expand...

The neon fortunately fought it off and I check him daily, not a single spot so I hope it isn't DGIV.

However, for my little flame gouramI I'm debating if I should snip off the fins on his tail because his tail is the hotspot for fungus and it spread to his side. I can wipe off his side with a small damp fiber cloth to get that fungus off but the tail is long gone looking. I wiped off the fungus from my Neon, added half dose aquarium salt, and used some StressCoat+ and he hasn't had a problem since then. I'm just worried about hurting him, I haven't got anything to sedate him.

Edit: I didn't snip his rear fin off, couldn't do it, I took a paper towel that was wet with his fish water (just did a water change before that too) and spent a couple minutes wiping off all the fungus I could see. I got most if not all visible fungus off, I hope the medication will work better now.
Share:
Facebook Twitter Reddit Pinterest WhatsApp Email Link