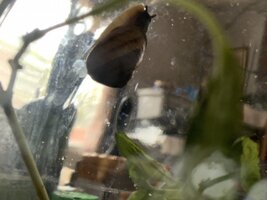 Lady came into the LFS ahead of me today and had this little guy. Her kids were collecting seashells at the beach in CalI and when they got home to Colorado they found this fella hitchhiking in the bag of shells. They assumed he was a salt water snail and she broughtt him in on a cup with a little sea salt in it.

I offered to just take the snail as I believe it’s just a garden snail that was hanging out at the beach. And the pet store clerk agreed with me.

I will post a pic of him in the identify section just to be sure but my questions are,

will he be okay from being transported in salty water if he is just a garden snail ?

Is he a garden snail?

He seemed pretty lively and quick for a snail but now that I got him home put him in his bowl and rinsed him with safe freshwater he is just hanging at the top of the bowl.
Was he in pain from the salt?
or is he some sort of brackish snail that needs it?

Also I didn’t expect to be homing this guy and I’ve just recently gotten into keeping freshwater snails in my aquarium I have no clue what to do with a land snail. I will be googling and researching but I thought I would post here first just to cover all my bases. so I have him in the bowl pictured with rocks above the water level and some live basil and lettuce any care tips for him would be appreciated and any ideas for a nice tank setup for him are also appreciated.

Poor guy, that is 100% a land snail. Good thing you rinsed it off in freshwater, the salt was probably irritating to it's skin.

I would probably keep it in a cool (room temp should be fine), moist container with a lid so it can't escape. Give it some leaf litter, soil and a few bits of bark and call it good. They'll eat all sorts of fresh veggies, I used to feed mine carrots and lettuce. 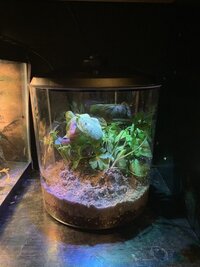 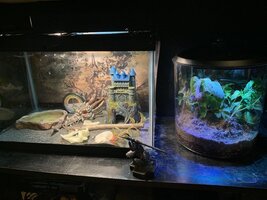 Went to Walmart and grabbed a 360 degree view betta aquarium got the little guy setup with some live herbs and lettuce ,He seems to be chipper as ever so I’m glad this will be suitable for him and or her. Got him chilling next to my (also rescued from the wild) fence lizard.

What to do with this Ramshorn snail!?

Algae Management and Algae Myths in the Planted Aquarium