HI Welcome to Fishlore! I'd love to help you get started in saltwater and guess what? My nano mixed reef tank is also a 20 gallon long.

A sponge filter can work for hosting beneficial bacteria just like it can in freshwater, but here's the thing... the rocks you'll need for a salty setup hold the large majority of BB in the tank, so they are the biomedia in the system. Plenty of nano keepers I follow do not keep biomedia in a filter. Instead, filtration space (in an HOB or rear chambers in all-in-one tanks) are usually used for mechanical filtration, chemical filtration (like carbon or GFO), and nutrient reduction methods. For example, my own HOB does hold a bag of Seachem Matrix but what I really use that filter for is running a product called ChemiPure Elite (which contains carbon and GFO for phosphate reduction) as well as a nest of macroalgae called Cheato (chaetomorpha... like fw plants, it uses nitrates for growth, so this is another nutrient reduction tool). So, I would say, with rocks in the tank, the sponge filter is unneeded.

On that note, flow is mega important in salty setups and flow rates are much higher on the salty side. You'll need a powerhead (or two) to provide the flow the tank needs. You'll want the total flow rate from all pumps/powerheads/wavemakers to equal about 20x the tank's total water volume. My own tank runs a little higher in flow rate and it is achieved by two powerheads on the short sides of the tank, as well as my HOB.

I couldn't be sure your lights won't grow coral... I mean, you could certainly try and see what happens with some low light stuff like mushrooms and leathers but my instinct is to say no... I wouldn't use fw lights for coral. Here's the thing... corals aren't cheap, and neither is reef lighting, but would you want to invest in the corals themselves only to bring them home to possibly die under insufficient lighting? I'm no pro when it comes to lighting but my #1 advice in this arena is, do not cheap out on reef lighting as this only causes more frustration and money wasted in the end. I speak from experience because I started my tank under insufficient lighting. That first light wasn't even all that cheap and corals survived, but they didn't thrive. A year into this tank, I was fed up with struggling corals who grew slowly. So, that not so cheap light was retired and I spent another big chunk of change on a proper reef light... meaning, the first light purchase was a total waste and I spent way more on reef lighting than I needed to because I purchased reef lighting twice! So, I like to say, don't be like me. Since you already have these fw lights I suppose you could give it a try, but again, do not spend too much on corals and do not look at an inability to keep them as corals just being difficult or your own failures. Light is literally food to corals and if they don't get what they need from your lights, it will just be an uphill battle from the get-go.

Sorry to be the bearer of bad news and really, I truly believe keeping a saltwater tank isn't as hard as it's made out to be, so I try to encourage folks whenever I can. On that note, please read the stickies in the Saltwater Beginner's Forum and return with any more questions you have. I'll be glad to help. Again, welcome to Fishlore!!

I have the beamswork lights on my freshwater tanks and I love them.... no way they will grow coral though. I have current USA lights on my 20 and 75 salts and the 24” lights puts out atleast double the light of my 48” beamswork... plus your missing parts of the spectrum. I know the lights where the single biggest reason I took so long to get into the hobby.

Check local fish stores(or fb market place) , mine has a consignment section and always has florescent/halogen type lights for cheap to get you started.

For the rock Amazon’s has worldwide imports Atlantic coral rock at $43 for 40lb too. I got some and was nice and clean, and then maybe find a little bit of live rick to help start the cycle.

On nems ... so awesome definitely get some ... maybe get wavemaker/ powerheads that have the foam protecting the intake cause nems can roam and I had to cut mine out of the wavemaker last week and it’s been all kinds of traumatic for me haha

Cutting corners with Corals usually ends in disaster. If you want to go budget, stick with FOWLR (Fish Only WIth Live Rock). The entry price point I recommend for a light that will grow corals is the $109 Mars Aqua 165 watt "Chinese Black Box" light, it has zero programming though:

If you want to go beamswork then stick with FOWLR as it or any LED light will work fine for that purpose.

Even for a 20 Gallon FOWLR I would prepare to spend between $400-$500 just to go FOWLR (this includes all accessory items, fish, rock, sand, tank heater, power head, test kit, etc).
OP
C

Thanks for all the helpful feedback, I am definitely going to buy a Powerhead and some better lights. Thanks!!!

Do you think it would make any difference if I ran both of the Beamswork lights on it, I should just upgrade. Thanks!
OP
C

Does anyone have recommendations for a budget saltwater light that could grow anemones and some soft corals?

I’m really happy with my current usa marine orbit lights, my anemones, soft, sps, and lps corals are quite happy in them. The newer model with the loop is on my upgrade list
OP
C

That’s a nice light! Does anyone have any opinions on the Nicrew led reef light, do you think that would work on a 20 long with some beginner corals? I’ve had nicrew kn the last, and I really liked them. Thanks!!!

Not likely, it’s only showing to be a planted aquarium light there on amazon.

Nicrew definitely not, Orbit Marine is hit and miss (some have good luck with them and others have problems).
OP
C 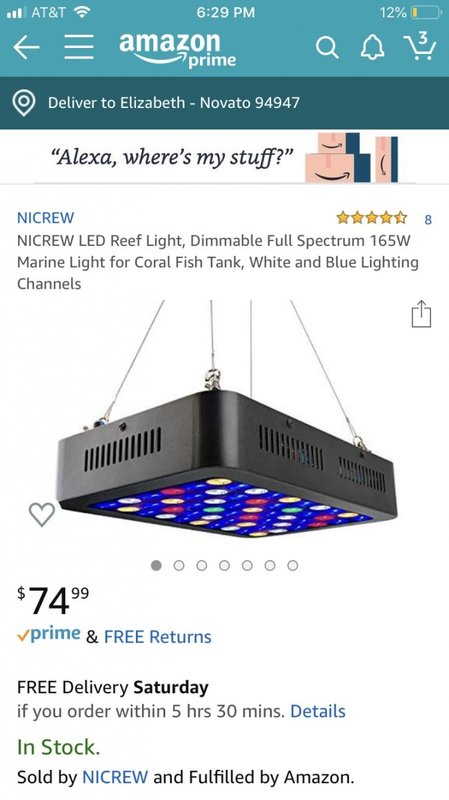 this is the one I was looking at.

Ah, didn't realize they were making the chinese black boxes now (usually they just have the weak light bars). That light will definitely work for coral growth but be aware that the customization is virtually non-existent and the build quality is anyone's guess. I generally recommend the Mars Aqua or Viparspectra as they tend to be better built.
OP
C