I am new to these forums and to keeping tropical fish and I could really use some help and guidance on this one, so if anybody has experienced this before please get in contact..

5 Rummy Nose Tetras were added to this tank a week ago and I am now down to 2 - I am well aware of rummy's sensitivity and acclimation requirements, and these were introduced to the tank in a very gentle and quiet manner. Unfortunately, despite my best efforts, the fish have one by one become very ill and died off. I am now worried that when I return home this evening there will be another one on its way out. Now I would be a little less worried if these fish had simply faded away as they became ill, but the way in which they became ill has been very stressful and really not a good way to start off my aquarium - despite my weeks of reading and research before buying a tank. I am a very careful guy, and wanted to do this properly.

My three rummys which have passed away have come down with what I can only describe as whirling disease. They become dosile, unresponsive and seem like they are on another planet to start off with, staying near the bottom of the tank and seeming oblivious to the rest of the school. Then their balance goes, and they begin to sway, corkscrew and turn upside-down - as if they don't know which way is up any more. Then the extremely violent thrashing and spasms begin, with them even leaving the water and hitting the aquarium hood as they writhe around the tank. It really looks like they are in pain, and the first two I removed from the tank and dispatched humanely as I couldn't bear to see them suffer. The most recent ill Rummy I left to see if he would get better, but alas he did not and died after around 6 hours of first showing symptoms.

Visually there are no white spots, damaged fins, swollen bodies, bulging eyes, white marks or any other visual signs that there is something wrong, apart from their obvious behavior change and subsequent death. I have done a bit of reading and whirling disease is the closest thing I can find to the problem in my tank. This is caused by eating tubifex worms which are infected with Myxobolus cerebralis - a parasite which causes the disturbing symptoms. All I can find on this, though, is that it affects coldwater trout - not Rummy Nose Tetras. Also, the stock in my LFS has no similar symptoms and their stocks are still all healthy. They also tell me they don't feed them tubifex worms - and neither do I - just shop bought flakes so far.

It's over a week since the first fish entered the tank and the latest one died today, I'm really not sure if my theory is correct - and even if it is I have absolutely no idea where the parasite could be coming from. I really hope somebody more experienced than me will be able to help here, so if anybody has any clues please reply on this thread. There is a video on youtube which shows a Rummy with very similar symptoms - this isn't my video but should give you an idea of what my wee fishies have endured:

I have a large community aquarium and I recently bought a school of 10 healthy Rummy Nose Tetras from my LFS. Over the course of a week they ALL died It was the same manner to yours. I have never fed tubifex, neither does my LFS.

I could find no definitive reason for their death. Water parameters were spot on and I acclimated them properly. They even took a few of my neons with them

Hopefully someone here can address the issue soon!

That is a possibility, but I also know that rummynoses shock easily. What acclimation method did you use, and what was the pH/hardness at the shop you bought them from?

HI folks thanks for getting back to me.

Sorry to hear that Yeoy, I was considering if it could be Neon Tetra Disease as some symptoms seem to correlate with that. Not sure about that though as my Rummys have never even laid eyes on a Neon, it could possibly explain your previous situation though.

Eienna, the temp and pH in the LFS are very similar to my own and the water is also almost free of calcium carbonate seen as we live in Bonnie Scotland where the water is as nice out the tap as it is from a bottle of spring water! Really though the differences are negligible - I can also tell by the behavior of my healthy Rummys that they are happy the rest of the time, their noses are a nice red colour during the day and they are very happy in the tank, with nie hiding spots and vegetation. The acclimation method I used was to close the curtains in the room, sit the open bag in water for 1 hour, add in tank water in small amounts for the next hour, net the fish into the tank, kept aquarium lighting off until the next day. Not sure how much more gentle I could be!

Development - the last Rummy which has died I bagged in an open freezer bag as soon as he started showing symptoms and kept at the top of the tank away from the others - a kind of makeshift QT. This Rummy died and unfortunately I had to leave him there overnight before taking him and the bag out this morning. The fish in question had no visible signs of illness on his body when he died (no Ich, velvet or whitespot) but now today he has a white growth protruding from the back of his head where the brain is.... What is this?? Sorry to post a photo of a dead fishy on here but hopefully somebody may recognize this.

Could this be the parasite leaving the body of the dead fish to re-enter substrate and start its life cycle again? Or is it a treatable illness that only shows visible symptoms after death? (Please be the latter!!) 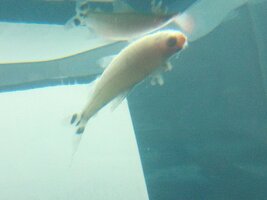 That IS peculiar. I've never seen that before. Hopefully someone else knows.

Just pure bad luck on this occasion, I really hope I don't have to overhaul this tank and start again...

Sorry to hear about your fish.

Below is another thread on Whirling Disease. If this is indeed what your fish have, there is no cure. See post #7 in the link below:
Question - Swimming in circles/twirling

Hold on for more responses.

is it only the new fish? if so I would say its just a bad batch. I had trouble keeping neons form one store. went to a diff store and all survived. I would wait awhile and make sure everything is ok then try another shop.

well hopefully this parasite dosnt spread. I would do daily water changes with vacs for awhile.

HI jojo, these are actually the first and only fish in this setup - so I cannot be sure if this would be contagious to other fish. I guess this is a perfect shining example of why fish should be quarantined! I have a QT on the way and will certainly be using it for all future additions to the tank.

I was having a think about the only things that I have added to this tank which harmful pathogens could be coming from..

1 - The fish food flakes
2 - Live plants from my LFS
3 - Sand Substrate, bagged and sealed from my LFS

These are literally the only mediums through which I could think of bad things getting into the tank. Ive never used soap or chemicals to clean, I don't have other pets or children which may affect the tank, my house is quiet and chilled out... I'm totally stumped

I didnt qt for awhile but I don't make that mistake anymore.

I would say the fish got it before they got to you. your just lucky there is nothing else in the tank. you could try to treat with something if there all that is in the tank. maybe the tetra parasite guard or maracyn 1 and 2. I have used maracyn with no ill effects.

if you end up loosing them all you might want to break your tank down and clean everything very well. leave your bio media alone or you'll have to re cycle your tank. when I was loosing neons for no viable reason I bought 8 and 2 survived then 8 more and 3 survived. I was stuck with 5 and gave up for awhile tried later and had no problems. maybe your others will make it, then give it some time and try again.

It seems that many people on this forum and others have experienced similar tetra deaths particularly with rummys. Interestingly this rarely seems to spread out with the tetras, and does not affect other species. Any more on tetra-specific illnesses?

Any more suggestions are very welcome everyone

Wow I'm sorry about your beautiful fishies. I was thinking of getting these guys but I may think twice. I hope it works out for you.

I have 2 left now and they are both healthy and happy, if not a little lonely... Nice tempered and good looking fish though, hopefully my problems are over

that's how it was with my neons. slowly they would all die off except for a few. I would try a diff store to fill out the rest.