DarkOne
When I set up my 75g, I wanted 2 medium sized plecos. I chose a L128 Blue Phantom and a L102 Snowball. It took about a month for the L128 to come out with the lights on and about 2 months for the L102. About a month ago, I moved my little BN Pleco from my 40 gallon to this tank because it seemed to be bullied by the bigger BN in there. They were all doing great with no aggression from anyone. Even when feeding, they all got along great.

Sometime between last night and this morning my L102 Snowball died. No signs of injuries or illness and stomach wasn't sunken in. The rest of the inhabitants in my 75 gallon are doing great so it doesn't seem to be an illness (that I could tell). 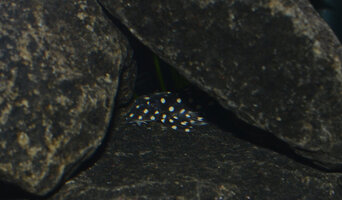 So I'm down a pleco and I've been looking for a replacement. I thought about getting another L128 (male) to pair with my female L128 and possibly breed them in the future or get another pleco. If I decide to get another breed, I've narrowed down my choices to these:

Any input would be greatly appreciated.

-Sofia-
I'm not great with stocking tank this big (I only know about smaller fish because that is what I've researched) but it looks like you'd be okay to get another Pleco IMO, I like the gold nugget Pleco because they look so beautiful and I love the name, gold nugget. Your tank is GORGEOUS BTW

and I'm sorry about the loss of your other Pleco
DarkOne
Thanks. My list of alternates was in order but the Gold Nugget made the top 3 . 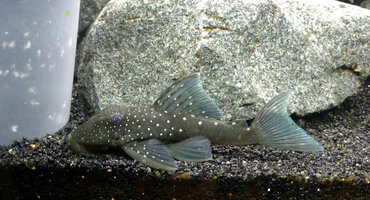 Thanks. My list of alternates was in order but the Gold Nugget made the top 3 .

You are making me me want a Pleco!! She is so beautiful!!!
Nataku
One of my LFS carries peppermint plecos and they are beautiful. Also not as fearful as some other plecos, at least not the ones in the store. They sit right out in the front of the tank. Beautiful eyes on them. Just, wow. Their eyes are mesmerizing.
DarkOne

You are making me me want a Pleco!! She is so beautiful!!!
Click to expand...

Thank you! She is really pretty. It took about a month for her to come out more and now she's less spooked so I can take better pics of her . She even started eating cucumbers I leave in the tank. (glass has been scraped since taking this pic) 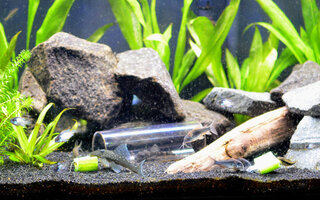 One of my LFS carries peppermint plecos and they are beautiful. Also not as fearful as some other plecos, at least not the ones in the store. They sit right out in the front of the tank. Beautiful eyes on them. Just, wow. Their eyes are mesmerizing.
Click to expand...

Yep. The L031 is my first choice if I get a different pleco. The dorsal fin on them is also amazing. I think I like spotted plecos more than striped ones.
DarkOne
Just got back from a LFS and they had 5 or 6 Vampire Plecos about 4". He said it was a Gold Vampire Pleco (he didn't know the L#) but looks like a regular Vampire Pleco. Close to a Galaxy Pleco but more brown than black. I want to check out 2 more shops before I decide.

They also had a bunch of bigger plecos including a 8" Gold Nugget Pleco and now that I saw a few 8"+ plecos, they might be too big for my tank so I'm almost positive I want to go with a L031 Peppermint Pleco now. I was tempted by the Vampire pleco though.
DarkOne
I had some time this afternoon so I stopped by Discus madness and Ely's.

DM has beautiful fish and all the tanks are clean and bare bottom. It's more of a breeder shop than a fish store but really, really cool place to check out fish. Their shipping rates are pretty high but if you're local, I'd highly recommend checking them out if that have any fish you're interested in. Their prices are very reasonable. Most of their plecos were pretty small.

Ely's is a well established shop with a good variety of fish but prices seem on the high side. Not too many different pleco species.

Hmmm....
DarkOne
So... I got down to a L007 Galaxy Pleco. The L031 Peppermint likes much warmer waters and I don't think it would fit in my 20 gallon long that's kept at 81°F. The L177 Gold Nugget can be territorial and I already have 2 plecos so probably not a good choice.

I was at a LFS to sell some of my EBA babies and looked around but didn't find anything I liked. On my way out I noticed one tank with 4 different plecos labeled on it but none to be seen. One was a L007 so I asked and they shook out abut 8 plecos from cave decorations in the tank. It was a great price and the little pleco was beautiful so I couldn't resist. I have some rummynose tetras in my QT and I just noticed a few spots of ich on 3 of them last night. The LFS has clean tanks and all the fish in the tank looked health so I'm taking a chance and putting it in my 40 gallon to grow out a bit. It's 2.5" now so when it reaches 4-5", I'll move it to my 75g. It's been very outgoing (for a pleco) and has been exploring the tank. 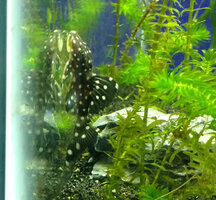